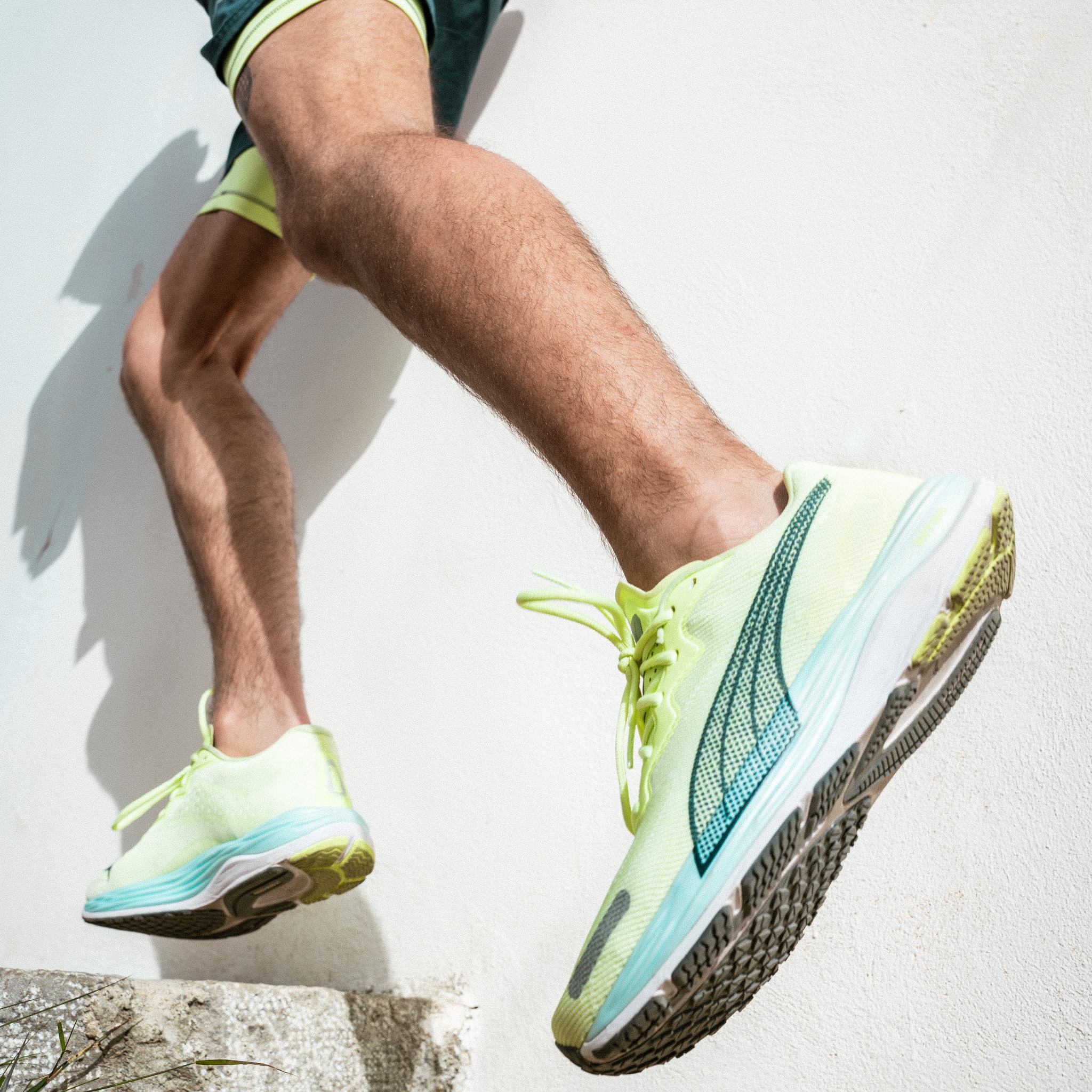 The lightweight, neutral PUMA Velocity Nitro 2 is a slight upgrade on what was already a really good shoe, offering a cushioned, responsive and comfortably smooth ride. – By Sean Falconer

In 2021, PUMA made the running world sit up when it introduced its Nitro range, featuring new nitrogen-infused NITRO foam midsoles. These immediately proved popular because of their cushy, soft feeling, but still with a snappy, responsive ride. The Deviate Nitro Elite garnered widespread attention that year when US marathoner Molly Seidel wore them as she won the bronze medal in the Olympic Marathon, and another popular model in the range was the Velocity Nitro, a budget-friendly neutral trainer designed more for recreational runners. Now with the Velocity Nitro 2, PUMA has managed to enhance the performance of the original shoe. 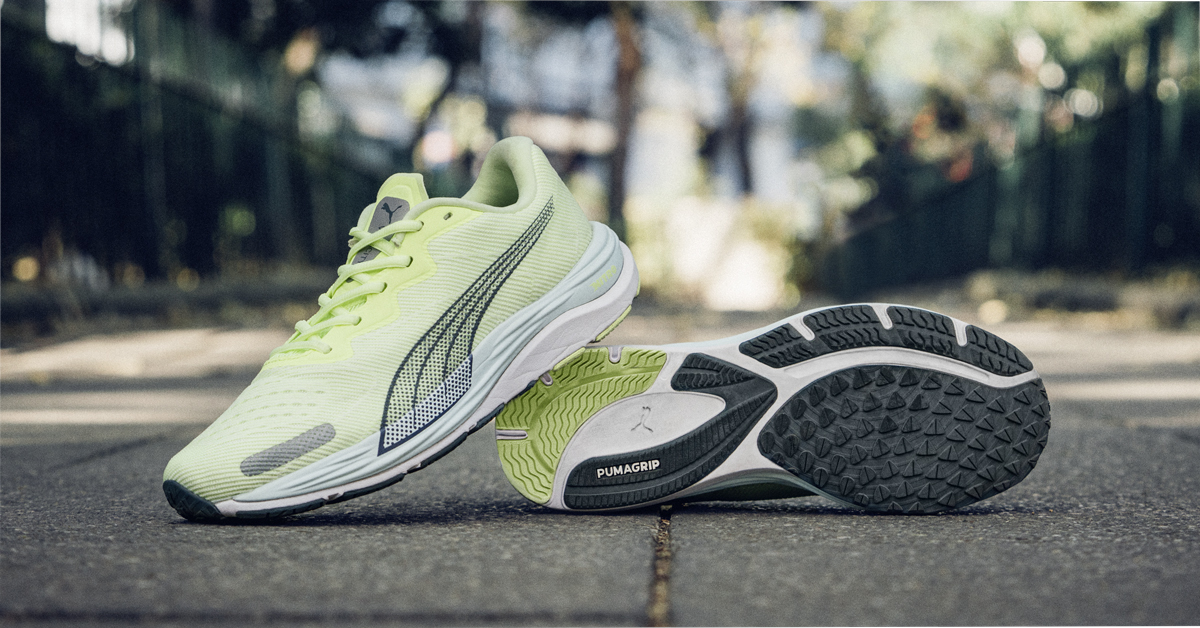 As much as NITRO foam has proven popular, some runners have found that the softness of the NITRO can start feeling a bit sluggish as your legs tire and you tend to heel-strike more and ‘sit’ lower on your heels. In other words, they wanted a bit more structure in their shoes, not just out-and-out soft cushioning, and that’s where PUMA has tweaked the design to improve the shoe’s performance.

The Velocity Nitro 1 featured a midsole made predominantly of NITRO, but with a heel plug of firmer EVA foam and a stabilizing plastic shank in the heel. In the Velocity Nitro 2, PUMA has extended the layer of EVA foam, which now runs the entire length and width of the shoe and sits underneath the NITRO layer. This provides more stability for the NITRO, allowing it to do its cushioning job without compressing too much and becoming sluggish. At the same time, PUMA has reduced the EVA foam’s thickness in the heel, and increased the NITRO foam’s thickness there, while eliminating the heel clip. The heel stack height remains the same at 33.5mm, with a 10mm drop to the forefoot.

These changes are responsible for a softer feel in the heel and a smoother, snappier toe-off, but that plusher heel is obviously of more importance to heel-strikers, especially with that 10mm heel-drop. That said, because I am a midfoot striker and like running lighter and faster, more up on my toes, I still found the midfoot and forefoot provided great cushioning and a most enjoyable ride, with a noticeable feeling of forward propulsion as you transition to the forefoot. I therefore found these shoes ideal for faster tempo runs and speedwork, but I could definitely still do long runs in them.

I also found that the PUMAGRIP rubber outsole coped well with several different surfaces I ran on, including tar, gravel and grass, as well as wetter surfaces, and the treadmill. The Velocity Nitro 2 features more outsole rubber than the original, but more importantly, the new triangular lugs on the outsole provide exceptional grip. I felt really sure of my footing these shoes. Oh, and at just under 250 grams per shoe, these shoes are light, but they also ‘feel’ really light, too. 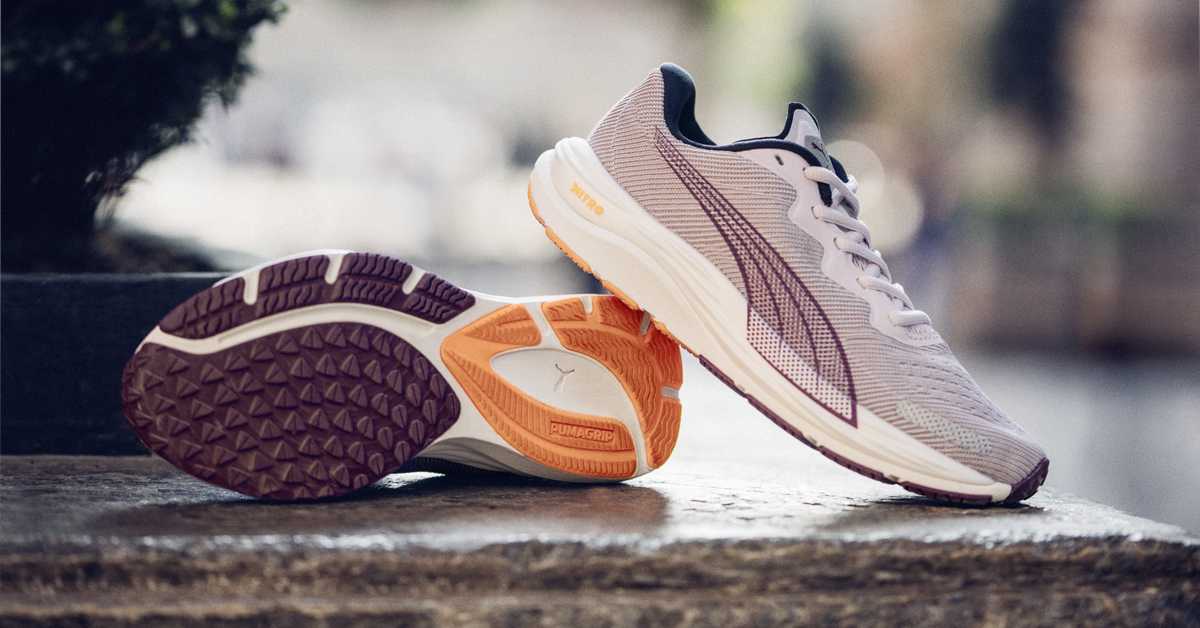 I don’t mind admitting that I have really soft feet, and thus I like a bit of cushioning around the heel area. Otherwise, shoes can rub my Achilles up the wrong way… That’s pretty much the only reason I was not the world’s biggest fan of the Deviate Nitro plated shoe last year, and also why the original Velocity Nitro was criticised. Happily for my heels, this new Velocity Nitro 2 ticks all the boxes in this area, with a well-cushioned and comfy heel collar, and I had no problems with slippage, because it’s not too bulky to prevent the heel being locked down securely.

The shoe’s new seamless mesh upper proved comfy, too – not quite the stretchy sock-like fit of other shoes I have run in, but still very comfy. I particularly liked the toe box area, which is unstructured and allows my toes room to wiggle. The tongue is now also slightly thicker and more cushioned, for extra comfort.

What My Feet Said

The key to this shoe is its NITRO midsole, providing exceptional shock absorption with energetic rebound, but that grippy outsole and comfy upper are also big plus-points. Meanwhile, the women’s version has been created with specifically for the female foot, with a narrower heel, lower in-step and sculpted arch.

In terms of fit, I have wider feet and found the half-size did the job in giving my feet enough room, while my usual 8.5 UK sizing seemed just right – the thumb-width of space in front of my toes is definitely a thumb-width. However, some reviews I read said that testers found the shoes a bit on the longer side, and thus recommended trying a half-size down. This is one of those situations where you will only know if you go into a PUMA stockist and try the shoes on for yourself. As they say, if the shoe fits…

The PUMA Velocity Nitro 2 retails for a suggested selling price of R2799 at PUMA stores, Totalsports, Sportsmans Warehouse, Superbalist and selected retailers, or you can order the shoes online at puma.com.