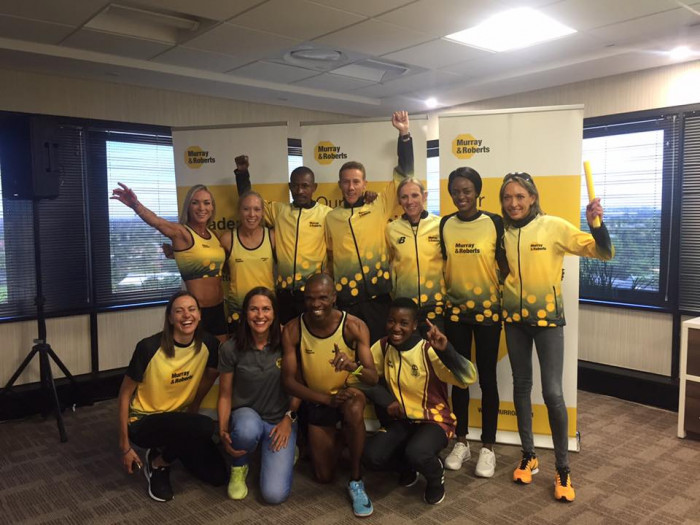 The multinational engineering and construction group, Murray & Roberts, launched its running club on Thursday 10 January at the Group’s headquarters in Bedfordview, Johannesburg. At the same time as unveiling the club’s elite and semi-elite squads as well as the new club colours for the 2019 athletic season, the club also announced the signing of multiple Comrades Marathon gold medallist, Charne Bosman. The 2016 women’s champion will be aiming for another fine performance in the world’s oldest ultra race this year, and says, “I am thrilled to join the Murray & Roberts team – black and yellow are definitely my colours!”

The club was originally announced during the Murray & Roberts Jack Cheetham and Letsema Awards in Johannesburg in November 2018. Group Chief Executive, Henry Laas, comments: “We are very excited to officially launch the Murray & Roberts Running Club. We are able to clearly identify with the athletes and the excellence they achieve through their physical and mental training. Seeing these athletes compete in Murray & Roberts colours is symbolic of the Group’s philosophy of Engineered Excellence.”

Club Chairman and five-time Comrades Marathon finisher, Ed Jardim, says: “There is so much potential in this academy for the club to nurture and develop. We have a deep desire to fulfil our corporate citizenship ambitions to achieve exceptional outcomes, not just for the academy but also for South Africa, and eventually on the roads and the athletic tracks of the world.”

National Club Manager, Dana Coetzee, a double Comrades Green Number holder, adds: “It is a privilege to be associated with the Murray & Roberts Running Club. We are in the fortunate position of having world class athletes in our team, as well as a group of young development runners.”

The first event for the elite, semi-elite and club runners will be at the Dis-Chem Half Marathon, which takes place close to Murray & Roberts headquarters in Bedfordview.

“Running is a sport that is practiced by a diverse and wide-ranging community, and through our support, we are looking forward to contributing to the development of running in South Africa. As a club, we focus on all of running and its facets, whether it is track, cross country or road running. The black and yellow club will provide an opportunity for us to see Engineered Excellence in action,” Laas concludes.

Murray & Roberts is headquartered in Johannesburg, South Africa, and is listed on the JSE Limited. For more information about Murray & Roberts, please visit www.murrob.com.