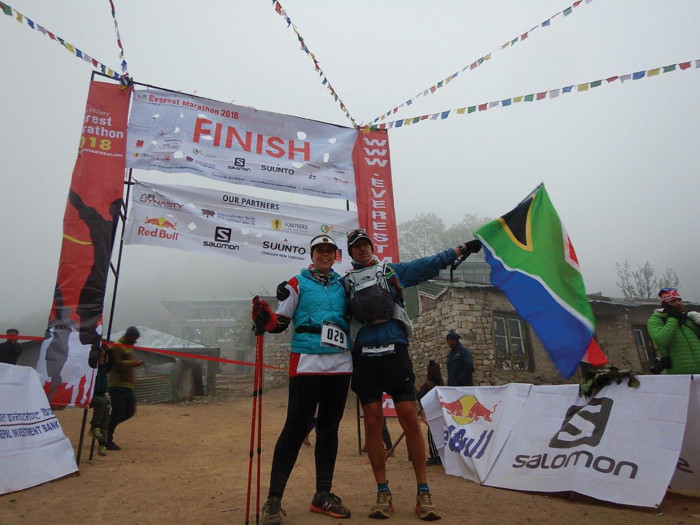 My wife Cindy and I took part in the amazing Tenzing Hillary Everest Marathon, which included an 11-day pre-race hike up to the Advanced Base Camp, where Everest climbers start their acclimatisation ahead of their climb. Even though we’d hiked to Base Camp before, this was still an incredible running adventure. – BY HENNIE PELSER

Many people have a bucket list, but sometimes something new drops into your bucket when you least expect it. Cindy and I did the Everest Base Camp Hike in December 2016, and since then we had moved to Japan in April 2017. Then in August I read on a trail running Facebook page about a South African woman that took part in the 2016 Everest Marathon. I checked out the website, and saw it would take place on the 29th of May, and would be the 15th running of the race. It looked like fun, a marathon starting at 5364m… Hey, been there once, why not go back and run as well? A quick message with the link to my wife, asking “Are you in?”, and two minutes later we were already making plans.

Himalayan Adventure
The race was started as a tourism initiative to commemorate the 50th anniversary of the first summit of Mount Everest in 1953 by Edmund Hillary and Tenzing Norgay, and the race takes place at the end of spring climbing season, when most of the mountaineers have completed their summit expeditions. (In fact, the season ended on the 29th this year, same day as the race, and during our two days at Base Camp we saw the Sherpas bringing down the ladders from the Khumbu Icefall.)

However, even with the best planning, the execution sometimes fails… Winters in Japan are terrible, with wind, rain and sometimes snow being normal. Also, I had to travel for work a few times, and we had a week-long holiday to Vietnam planned a month before the event. All these combined saw us arriving in Kathmandu on the 11th of May slightly overweight and way under-trained.

On top of running the highest trail run in the world, you first have to hike for 11 days from Lukla Airport to Base Camp to start the marathon in freezing conditions on the 29th! Lukla is the most dangerous airport in the world, as there is no radar, and the pilots fly by sight, landing on a very, very small airstrip. Our flight on the 17th was delayed by four hours, and once we were airborne, we were forced to turn around at the halfway point due to zero visibility, but we eventually got through a few hours later.

The weather was mostly warm and clear in the mornings, and we could hike in short sleeves, with the afternoons becoming cloudy and cool. The biggest challenge is not the hiking, but getting to the start of the race in a condition to compete. We had a race doctor with us and had to undergo medical check-ups every few days. The biggest problem is to cope with the altitude change – I had massive headaches from when we crossed 3200m, and had to take pills daily – while not picking up a stomach bug, or catching a cold. We used hand sanitiser every few hours and took pills daily to keep our stomach flora healthy. Also, you have to drink four to five litres of water per day to help with the altitude change.

Our hiking group numbered 28, and apart from the two nights in tents at Base Camp, we slept in lodges (or teahouses, as they call them in Nepal) and had a set menu every day that varied between various forms of bread, rice, spaghetti and potatoes. Meat is generally avoided, as freshness is not guaranteed. I never want to see a potato in my life again! The highlight of the trek is the two days at Namche Bazaar, where you can find anything from pizza and a German bakery to a salon to cut your hair. Also, as you go higher, everything becomes more expensive: A litre of water in Lukla is 80 NRS (about R10), but at Gorakshep it is 400 NRS (about R50). That said, a tube of Pringles at R100 is still a bargain when you are hungry!

Once at Base Camp, we had the opportunity to sleep there two nights, a unique experience that hikers do not normally have the privilege of experiencing. We slept in tents, on a semi-level bed of rocks, on very, very thin mattresses, and even in summer the temperature at night can easily drop to -15°C – you are, after all, sleeping on a glacier, right next to the Khumbu Icefall. I remember waking up at two in the morning to answer the call of nature, and standing outside the tent it was dead quiet, with a full moon and no clouds. Those mountains make you feel really small.

Time to Try Running
This year’s race celebrated the 65th anniversary of the first summit, with just over 200 runners from 30 countries taking part, including three from South Africa. The other South African, a ‘boerseun’ from KZN called Rhyno, actually summitted Everest five years ago, and he just came to see if he would like to do it again. (We checked with the organisers, and according to their records, eight South Africans had done the full marathon before, so after this year the tally is now 11, with Cindy and I the first SA couple to do the race.)

The 60km ultra-marathon started at 6am, with the rest of us starting the marathon at 7am. The record for the marathon is a somewhat slow 3:47, because there is no running at that altitude, unless you are Nepalese. The first 10km is quite technical, so even if you could run at that altitude, it is a risk. Just 3km into the race, Cindy told me if I did not take her running pack, she would not be finishing, as the second night sleeping on the rocks had put her back into spasm. For the rest of the race, I had her pack in front and mine on my back.

After Lobuche at 10km, a nice trail drops to Thukla and then Dingboche, and running is easier terrain-wise, but you are still just below 5000m, so your legs and lungs are not really on your side. However, the direct route from start to finish is only 37km, so to make up the 42.2km distance, you do a 5km out-and-back loop from Dingboche to Bibre, which takes you through the halfway mark. We had easily hiked and run this portion on our rest day a few days earlier – now it was into a serious headwind and no fun at all!

From Dingboche you drop further to Pangboche, and by now the altitude was below 4000m and we could run. There is actually an eight-hour cut-off at Thyangboche Monastery at 32km, which is preceded by three major climbs, and if you don’t make it, they advise you to sleep in the lodge and continue the next day. We made it in 7:30 and had only 10km left, but nothing here is easy… It took us almost four hours to get from there to the finish! After Thyangboche, you have to navigate a long and technical descent, then there are two extremely steep climbs, and in the last 3km there are three smaller climbs. There was no running here, just walking and resting, and telling each other what a bad idea this was.

Anything for a Shower!
We eventually rolled into Namche Bazaar in a time of 11:32, a long time to be on your feet, but at least we just missed the rain that started to fall a few minutes after our sprint finish to the line. Spare a thought for one of our friends who did the ultra in a gorilla suit to raise funds for the gorillas of Africa, finishing in 19 hours, at 1am in the morning. Raemonde, you are one crazy lady! Having finished, all we wanted was a shower and some food. (For the record, this would be just our third shower since we left Namche Bazaar nine days earlier.)

The next day we would have started the hike back, but we got word that there were more than a thousand people in Lukla waiting for flights out, so we were given the option to rest a day and then fly directly out to Kathmandu a day later with helicopters, as the conditions at Lukla did not seem to be getting better. Of course, we had to pay for the helicopter flight, but what the hell, how often in your life would you get the opportunity to chopper out of the Himalayas? Swipe the card, sir, we’ll deal with this once we get home.

PS: During our hike up the second-last climb on race day, Cindy and I promised ourselves no more stupid races for the next few years. However, Mongolia does sound interesting…