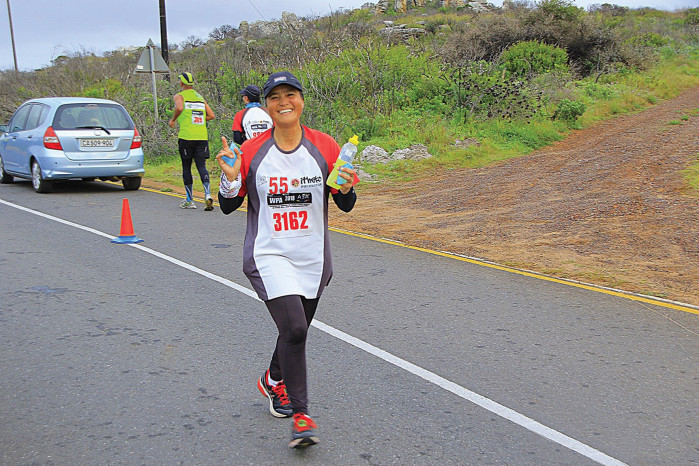 As she made the final turn at the 2018 Sanlam Cape Town Marathon, Tougieda Allie felt a sudden sense of relief and joy that made her burst into tears as soon as she reached that blue-carpeted finish line. A tough year followed by a tough race… but she had made it through both. – BY PJ MOSES

The sight of that blue carpet at the finish of the Cape Town Marathon was one of the sweetest sights Tougieda Allie has ever seen in her running career. “I could not hold back the emotions, and when my feet touched that blue carpet, I felt like I was running on clouds. It is hard to explain to anybody else, but the past year has been very rough for me and my family, with many personal obstacles that made things increasingly difficult for me as a mother, and that moment of personal triumph at the end of a tough race just meant so much to me.”

Even though this veteran runner of many races, including the Old Mutual Two Oceans Marathon, has many medals in her collection and many years of running experience, it took all of her determination and a strong will to get from the start to the finish of this marathon. “Besides the personal issues weighing on my mind in the lead-up to and during the race, I also had to deal with a pain in my side that made it hard to train for two weeks before the marathon. I decided to self-medicate the pain, just in case I went to the doctor and he gave me antibiotics that would then mean that I could not run the race. I didn’t want to take the chance, and just made sure that my head and chest were in a good state. Whatever the pain was, I could deal with that after the marathon.”

She thus took things slow and easy during the race, just staying in front of the backmarkers, and even though she would eventually run one of her slowest marathon times, she wasn’t worried about that. “It was more important to me this time to concentrate on finishing, and in the end everything went according to plan. I finished with ten minutes to spare before the cut-off.” Then, with the job done, she let all that emotion come tumbling out.

Runs in the Family
Tougieda admits that running was far from her mind for much of her life, even though she stayed active with regular hikes with her two kids and extended family. However, she had one specific friend who kept telling her to give running a try, and kept inviting her to join the weekly training runs held by the Itheko Athletic Club. Finally, in 2011, Tougieda decided to try it, just to shut her friend up, because she says she didn’t like being nagged about it all the time.

“I didn’t really like the idea of running, and I had always thought that there was something wrong with people who were runners, but after that first training session with Itheko I was hooked, and decided to go every week. Soon I ran my first race at the Metropolitan 10km in Bellville. I didn’t know anything about the route, and if I knew beforehand how hilly it was, then maybe I would not have run it!”

These days her family has a rich running culture and she has many relatives who are members of running clubs all over Cape Town. “We love being part of the running community and leading a healthy lifestyle. My daughter and her kids also recently joined Itheko AC, and it makes my heart burst with pride when I see them enjoying the adventures we undertake as a running family. I haven’t yet convinced my son to start running, but I hope he joins us soon and brings his family along to make our circle even bigger.”

Me-time and Medals
This mother and grandmother from Hanover Park runs as much as she possibly can, and says the most important thing that running gives her is what she calls “Me-time,” which she relishes. “I find that I love the feeling of being in my own head while I am running and reflecting on my life and the choices before me. I also make time to recite words from the Quran and this calms me.”

There is still one medal that is missing from Tougieda’s collection, one which she would dearly love to get her hands on. “The Comrades Marathon is always on my mind as a runner, and I always say that I have actually done a full Comrades, just over two years. The first time I decided to bail at about 57km because I was seeing stars, the second time I went through halfway when the wheels came off. Being a Muslim, I have had to put the race on the back-burner because it fell inside the window of our fast, but I am hoping to go back in 2020 to tackle the race again. That is the biggest tick I want on my bucket list, and I am determined to successfully complete that race, no matter what!”