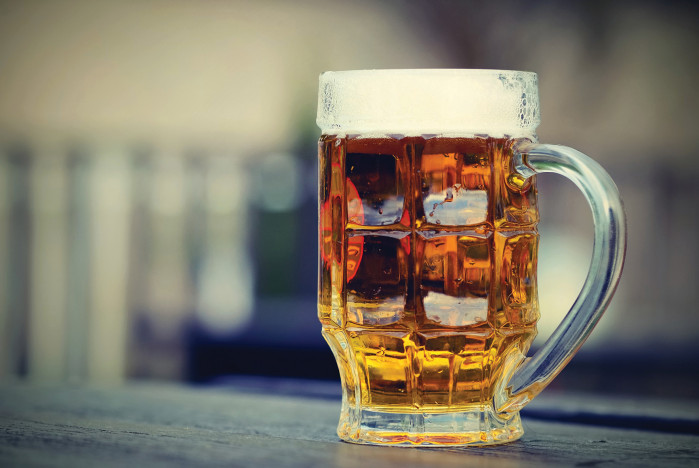 Few things beat a nice cold beer after a hard run, but after the last sip, you may feel like you’ve taken a couple of steps backwards after all that hard work. Relax, because there is no reason to feel guilty for having a pint or two. – BY CHRISTINE PETERS, REGISTERED DIETICIAN

Let’s try a new approach: Instead of completely ruling beer out as detrimental to our performance, let’s see how we can make it part of a healthy, balanced lifestyle, so let’s start by learning more about beer. One small (330ml) bottle of beer containing 5% alcohol is equivalent to 1.6 units of alcohol, and contains 142 calories, which is equivalent to two slices of bread or half a burger. It would take the average 68kg man around 14 minutes of fast running to burn this off.

With seven calories per gram, alcohol has almost the same calorie content as fat. Alcohol has no nutritional value, and despite the calorie content, may make you feel hungry, as it lowers your blood sugar. Some people think beer is a good source of nutrients for post-exercise recovery, but if you compare it to a glass of orange juice, beer unfortunately does not even come close. A glass of OJ supplies four times the amount of potassium and almost three times the amount of carbs. It would take 11 beers to obtain the B-vitamins you need on a daily basis.

It’s about timing, too. Training or competing after drinking is never recommended, as dehydration can lead to reduced athletic performance, and while alcohol is a diuretic, meaning it makes your kidneys produce more urine, exercising straight after drinking can make dehydration worse because you sweat as your body temperature rises. You need to stay hydrated when you exercise to maintain a flow of blood through your body, which is essential for circulating oxygen and nutrients to your muscles.

Alcohol can also make you more prone to injury in a variety of ways, such as altering your sleep cycles, which reduces your body’s ability to store glycogen. Alcohol also increases the level of the stress hormone cortisol, which slows down healing. Furthermore, drinking has an enormous impact on muscle protein synthesis, the process where muscles generate new proteins, which are necessary for skeletal muscles to benefit from training by recovery, growing and adapting. Alcohol can reduce muscle protein synthesis by a third, leaving you unable to improve and build strength.

Beer Benefits
But it’s not all bad news! Moderate beer drinking as part of a healthy lifestyle, may be linked to lower risk of cardiovascular disease, kidney stones, type 2 diabetes and high blood pressure, and can also boost your immune system and help fight infection. Moderate intake is loosely defined as no more than three standard drinks per day for a man and two for a woman. So when it comes to the benefits of drinking beer, it really comes down to the amount consumed: If you’re eating healthily and exercising, don’t worry about one or two beers. Just keep your consumption moderate, and look at your beer-drinking as a training tool.