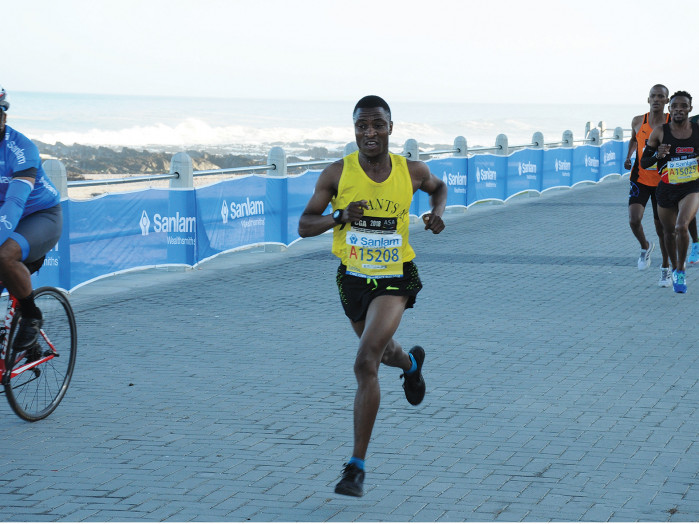 In July this year, 28-year-old Precious Mashele, received a phone call from his mom to let him know he was now the head of the family, and would need to provide for his siblings from now on. She was saying goodbye… because shortly after that call, she passed away, and Precious was left to fend for his brothers and sisters, who are still at school. Despite the emotional loss, Precious has been able to mourn in his own way, and “get on with the business” of fending for his family, by winning national titles in road running and cross country. – BY MANFRED SEIDLER

Precious Mashele shows little emotion when speaking about his mother, but it is clear her passing has been a big blow. “It hurt, but I just had to get on with it. I need to look after my brothers and sisters, they need me now, so I need to be strong. Of course I miss her, but my siblings need all my support now.” In spite of losing her (his dad passed away in 2008), Precious still considers 2018 a good year from a performance perspective. “I cannot complain. The last few months have been hard racing, but good racing. We are following a plan, and it is all falling into place for 2019 and 2020. So I cannot complain.”

To call the last few months merely “good racing” is perhaps the understatement of the year! He won five high profile events and two national titles from late August to mid-October, with the streak starting on 26 August as he defended his 10km title at the Mandela Day Marathon, clocking 30:32 on a course that effectively climbs from start to the finish. Then on 9 September he destroyed the star-studded men’s 10km field at the SA Cross Country Champs in Port Elizabeth, followed two weeks later by the successful defence of his 10km title at the Sanlam Cape Town Marathon, where he clocked 29:11.

Just a week after that, Precious lined up at the SA 10km Road Racing Champs in Middelburg on 29 September. Precious held off the late charges of rising star Thabang Mosiako and defending champion Elroy Gelant to secure a second national title in a month. This time he clocked 29:43. And then just two weeks after that win, he travelled to Cape Town again for the OUTsurance KFM 90.4 Gun Run 10km and posted yet another successful title defence, the day after his 28th birthday, in a time of 29:24.

Having dominated the racing circuit in this period, Precious simply says, “My focus for 2019 is the World Cross Country Championships in Arnheim, Denmark next year, so by winning the national title, I effectively have secured my spot on the World Champs team, barring a fitness test. And then I want to qualify for the World Championships in Doha in October in the 10,000m.” Given his current form, odds are he will be successful in that goal.

The Best Coaching
Coached by multiple South African champion and record holder Hendrick Ramaala, Precious’ calendar is worked out to the finest detail. “We are working towards 2020 and thereafter Precious will be focusing on the big city marathons. We race sparingly and that was also the secret to my success,” says Hendrick. “We will follow this policy for Precious’ entire career.”

Precious may have been a late bloomer – he only joined Hendrick’s training group in 2015, after the latter saw him running in Cape Town – but his improvement has been remarkable under Hendrick’s coaching, going from a 29:19 best for 10km to 28:33 a year later in 2017 (still his best to date). Hendrick’s strong cross country background has also rubbed off on Precious, and no-one was able to touch him at the provincial trials at the end of August. He then carried that form into the National Championships two weeks later, and 2019 will see him race at the World Cross Country Championships, barring any unforeseen circumstances.

After that, the plan is for him to head to Europe to run in a few 10,000m races to secure his place in the 10,000m at the World Championships in Doha in October. He will run one or two half marathons in 2019 as well, but only if they fit in with the training and racing schedule set aside in his pursuit of getting to the World Champs 10,000m.

Humble but Hard
Precious is soft-spoken, preferring his coach and mentor Hendrick to speak on his behalf – and the coach is certainly excited about his protégé. “He works hard, he is tough as nails, and that will help him in his career. Because he started late, there is less opportunity for things such as many Olympics, but the next seven years will be good ones for Precious if all goes well.” Meanwhile, Precious says the 2018 season is effectively running to a close and it is now time to rest his body, and maybe reflect a bit on his year, then look ahead to 2019. No doubt he will be spending a fair bit of time with his siblings in the off-season, but be prepared for some big statements from him in 2019.