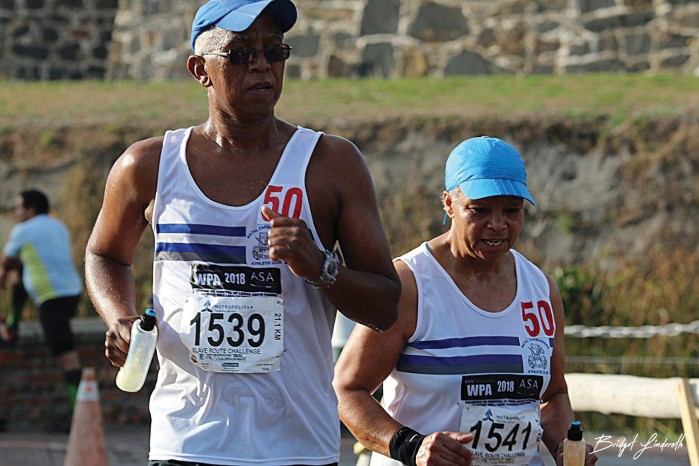 His Comrades record lists nine successful finishes, and nearly as many DNFs, but Eugene Lekay says that he will keep going back until he gets his Green Number. In the meantime, he just wants to enjoy his running as much as he always has. – BY PJ MOSES

When Eugene earned his ninth Comrades medal in 2012, he thought his permanent number was surely in the bag, but six years later that 10th medal is still eluding him. “I thought when I got my first medal that I would just do Comrades eleven times and then move on to something else, but it seems that fate has other ideas,” he says ruefully. “I’ve now had 16 Comrades starts, but still only nine finishes – it is frustrating, but I won’t quit until I achieve my goal.”

Eugene’s long fascination with Comrades was born from watching it on his neighbour’s TV when he was young. “We had to pay fifty cents to watch it because they were the only ones with a television in our street. I was enthralled by the idea of the race and the way it played out.” Thus the Comrades seed was planted, but it would take years to grow, and in between Eugene finished school and then studied teaching, while also being very involved with struggle politics and anti-apartheid activism. Running very much took a backseat.

“By the time I started teaching in 1987, the only involvement I had in sport was as a technical official for the school athletics. I only started running eleven years later in 1998, when I helped to get Bonteheuwel Athletic Club off the ground.” He explains that one of the main reasons they started the club was to keep the kids in their community active after school, and throughout the year. “It is very important, especially in the poorer communities, to encourage individual sport, which gives the kids a sense of self-worth and improves their quality of life with every step they take. Unfortunately, it is hard to keep the kids interested in running, because team sports like soccer and rugby often take precedence in terms of opportunities that can in turn open doors for them to study further, or even follow a career in those fields.”

Bitten Again by the Bug
Even though he joined the club with the main goal of encouraging others to run, Eugene soon found himself drawn to the sport. Within the first two weeks of starting to run, he had completed a 5km, a 30km and a marathon… The bug had bitten him hard! “After qualifying successfully for the Two Oceans and Comrades ultra-marathons, I added the Hewat 100 Mile race to that potent mix. My second year of running in 1999 was even busier, and the longer the distance, the more it pulled me toward doing it.”

He was not only the first runner to represent Bonteheuwel AC at Comrades in 1999, he was the only member in the race. “It became very lonely without any support from clubmates, so I decided to change clubs and joined Easterns AC in 2003. After a few years there I drifted a bit, but then I joined Brackenfell AC and stayed with them for a good 10 years from 2007 to 2017. Recently I decided it was time for a new home, and I moved over to the Carbineers, where I found a home filled with likeminded individuals who are encouraging and supportive of this next phase in my running journey.”

He admits he has never been the most disciplined when it comes to following a training programme, and thus depends heavily on his ability to not let the pain or discomfort of the long run get to him. “My mental strength is what has kept me going through many ultras when other faster athletes had long given up and called it quits. Running long distances is therapy for me. It makes me forget about the everyday worries and is a great way to relieve stress.”

On a related note, Eugene thinks that newbie runners often make things too complicated and should rather focus on a more simplistic approach to the sport. “To run, you just need a proper pair of shoes and the right mindset to get you through races. Clubs need to teach their newer members that running alone is to your benefit as a runner, and builds the character that is needed when things are not going your way. Also, running must not become an obligation, but instead you have to love it, because if you don’t then you’ll lose your passion for it. Try to always keep a healthy balance between running and your life outside of running.”

Interesting Adventures
Eugene’s 20-year running career has included quite a few adventures along the way, from sleeping in a police station with a giant teddy bear as a pillow the night before a race, to boarding a bus to Durban for the Comrades without a place to stay once there, but finding a spot as the bus pulled out of Cape Town. “I don’t believe that anything should stand in your way when you want to do something, there is always a way to achieve your goals. Just like running, you need to keep going and never quit.”

“I remember in 2007 I ran the Two Oceans Ultra with no sleep, because I was busy laying a floor in my house, and in the wrong shoes. Instead of road shoes I had a pair of trail shoes on, and they were very hard on your feet when you ran on the road. By the halfway mark I was close to quitting, but a lovely lady at the side of the road offered me some Coca Cola and salt to keep me going. I finished off her whole 1.5-litre right then and there, and chucking the salt in the drink gave me all the energy I needed to get myself to the finish. I made it across the line with ten minutes left on the clock.”

Beside his goal for a tenth Comrades medal, Eugene also wants to run a marathon in every province of South Africa, even if he can only do one province a year. “I started this year by doing the Meerkat Marathon in the Northern Cape. I love the idea of travelling for more races, and this is a perfect reason to do so. Other than the marathons, there is also the Washie 100 Miler in the Eastern Cape that is on my bucket list. I have heard only good things about this tough race, and would love to complete it at least once.”

However, more important than medals or ticking off races for this veteran of the road is the bond that he has built with many running friends through decades of sharing the roads. “We encourage each other and always look forward to spotting familiar faces at various events. It feels like we are the last of a vanishing breed and the sense of loss is felt harder every time that I hear somebody has passed on to the big ultra in the sky. At 54, I still feel that I have a few good years of adventure left, and having retired from full time teaching gives my wife Rozetta and I the freedom to plan our travels better. As long as I can run, I will keep entering and keep doing what I love.” And chasing that elusive Green Number, no doubt.