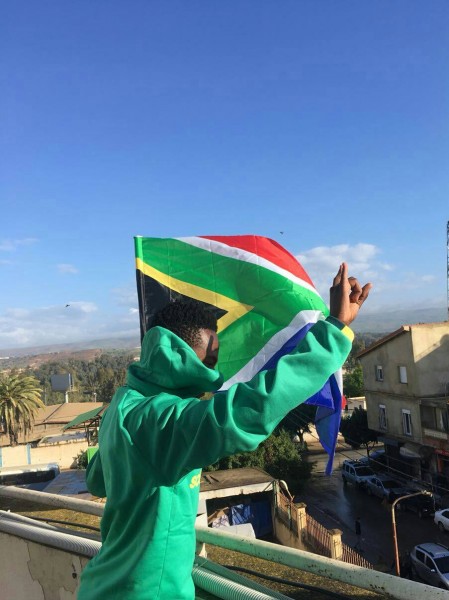 Young track talent Ryan Mphahlela enjoyed a breakthrough 2017-2018 season on the track, and now looks set to take on the world. – BY MANFRED SEIDLER

Tembisa is a large township in the north of Kempton Park on the East Rand with a population of just under 500,000. It is also home to the Tembisa Athletics Club, which hosts the annual Tembisa Street Mile and 10km road race. the club also hosts a 5km time trial every Wednesday at the Living Waters Bible Study Centre, and on 10 January this year, 19-year-old Ryan Mphahlela made a massive statement as he flew to a time 14:39 to set a course record for the Time Trial. He had already represented SA at the 2016 African Cross Country Champs and 2017 World Cross Country Champs in his age category, but that time trial made the older runners sit up and take notice!

To prove this was no flash in the pan, Ryan then went on to destroy the field in the 1500m at the Central Gauteng Championships, in a race that included former SA Champion Folavio Sehole and Dumisane Hlaselo, who have been considered part of the big three in the event in SA for a number of years. Ryan was uncatchable, running from the front to win in 3:44.03, and it was that result more than his 5km time trial that prompted the organisers of the first Liquid Telecom Grand Prix event in Ruimsig on 1 March to allocate a starting berth to Ryan. He literally grabbed the opportunity with both hands, finishing fourth in a field that included the then U18 World Champion, George Manangoi of Kenya, who recently added the U20 World Title to his name, and Ronald Musagala of Uganda, who boasts a best of 3:33.65 for 1500m. A mere seven tenths of a second separated second from fourth.

More to Come
The pundits were even more impressed when Ryan once again showed his trademark never-say-day attitude a week later in the 3000m at the second Grand Prix meeting in Pretoria. He was the only athlete able to stay with World Championship 10,000m silver medallist, Joshua Cheptegei, who many believe will be the next force in world 5000/10,000m racing with the retirement of Britain’s Mo Farah, and the crowd were on their feet as Ryan tracked the Ugandan lap after lap.

Joshua eventually shook the youngster off with a final surge at the bell to win in 7:49.48, but Ryan was warmly applauded as he continued to chase the Ugandan down the home straight and finished second in 7:59.96. Having watched the young South African post a marvellous sub-eight in his debut at the distance, the Ugandan said, “He is a big talent. He shows no fear, and that is good. He will give some people a big scare in the years to come.” High praise indeed, but Ryan calmly took in all in stride. “I love to challenge myself, and racing Josh showed me I do not need to fear anyone. Respect yes, fear no.”

International Exposure
On the back of those two performances, Ryan was then invited to Europe to race in a series of middle distance events in Belgium and Holland, after he had represented SA again at the African Cross Country Champs. He won his first 1500m at the Nivelles Meeting International on 23 June, clocking 3:41.44, just a second off his lifetime best of 3:40.44. A week later he had to settle for fourth in his next 1500m with a time of 3:42.55. “I ran a tactically poor race there and paid the price. One thing I have learnt is that racing in Europe is different to racing in South Africa. Here I can play a big role in dictating the race, but in Europe there is so much more depth and I cannot lead from the front. It also shows I need to get stronger and faster.”

His final race in Europe was over 3000m on 7 July at the Hilversum Arena Games. This time he did lead from the front, clocking 7:53.96 for a huge, satisfying personal best. “That is my season for 2018. Now I will prepare for the 4km at the SA Cross Country Championships in September, which will be first attempt at a senior national title, and my focus will be on qualifying for the World Cross Country Championships. Then in 2019 I want the SA 5000m title. I think that will be my best event in the future, but I still want to qualify for the 1500m at the World Championships in Doha next year.”

Ironically, Ryan was a keen footballer and had no idea of his running talent until he was entered in a cross country race in Grade Four. “I was so shocked, but I won, and it was then that coach Elvis started coaching me and I’ve been with him ever since,” says Ryan. (That’s Elvis Innocent, the coach at Tembisa Athletics Club). It is here, in Tembisa, that this remarkable young talent is staying level-headed as he prepares himself to continue taking on the world’s ‘big guns,’ and after this season, they have been warned!