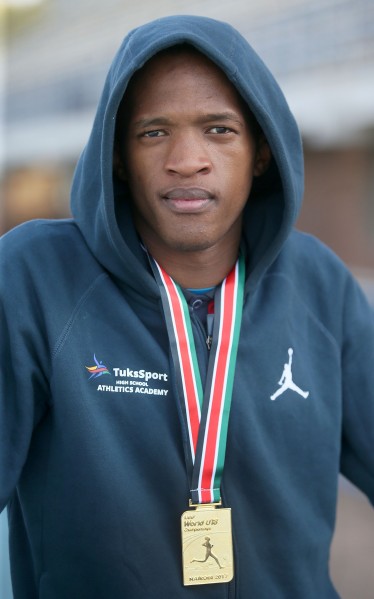 In South African athletics history, only high jumper Jacques Freitag has ever won a clean-sweep of World Titles at Youth, Junior and Senior levels, but now that hurdler Sokwakhana Zazini has added the 2018 World Junior title to his 2017 World Youth title, he may just be on his way to emulating that feat. – BY WILHELM DE SWARDT WITH SEAN FALCONER

In the lead-up to the IAAF Junior World Championships in Tampere, Finland in July, Sokwakhana Zazini went on record stating that he absolutely hates losing on the track. Not that he loses all that often in the 400m hurdles, take note… the last time he didn’t win a youth (under-18) or junior (under-20) age group race was in 2016, and that impressive streak includes winning the 2017 Youth World Champs title in Nairobi, Kenya, and setting a Youth World Record of 48.84 during the 2017 Gauteng North Championships.

In Finland, it was clear that he had no intention of seeing that streak end, but he had to work hard for the win in the 400m hurdles final. The man they call ‘Socks’ appeared to run fairly relaxed for the first 200m, but that saw him caught up in a fierce four-man tussle with just 60 metres remaining. However, the Tuks High School matric pupil was able to shift up another gear for the last two hurdles and final dash for the line to narrowly take the gold medal in 49.42 seconds. Bassem Hemeida (Qatar) was second in 49.59 and Alison Santos (Brazil) third in 49.78. In an interview straight after his win, the ecstatic double World Champion just had this to say: “The competition was really tough, but I'm thrilled with my support team. This is an exceptional and proud moment for me and my country.”

This latest title is yet another highlight in a great 2018 season that has also seen Socks taking on the seniors for the first time. In March he finished second at the SA Senior Champs, running 49.32 to beat the likes of three former Olympians, LJ van Zyl, Cornel Fredericks and Le Roux Hamman. Then in June he, he competed for the first time in an international race in Prague, and placed fourth in 49.56. He attributes this success against the seniors to the mind shift he made at the beginning of this year: “I told myself that I don’t consider myself to be a junior athlete anymore. I will race anyone, anytime, no matter how old they are or what they have achieved. If I get whipped, so be it, I will take it like a man. The only thing that matters to me is that afterwards, I should know that I raced to the best of my ability.”

Still Learning
In spite of this success, Socks feels that his hurdling technique is not yet what it should be. “I am getting better, but my technique going over the hurdles is not yet as efficient as it can be. There are a few other small things we are also working on. Once I have mastered it all, I think there will be no limits as to what I might be able to achieve. I just have to be prepared to put in the hard work. I don’t ever focus on what others are doing, I do my own thing, but most important is to enjoy what I am doing.”

Meanwhile, he is no slouch over the 400m flat sprint. At the 2017 SA Junior and Youth Championships, he won the youth 400m in 47.23 and the 400m hurdles final in 50.85. Then in March this year he repeated the feat by winning both junior titles, clocking 45.86 and 49.98 respectively. That also meant that he became only the second SA junior ever to break 46 seconds over 400m, the first being Riaan Dempers, whose SA Junior Record of 45.15 has stood since 1994. “It had been my goal for a while to break the 46-seconds barrier,” says Socks. “The secret is to be focused, so when I settled in the starting blocks that day, I told my mind to switch into racing mode. It is always special when you get to achieve the goal you set yourself.”

When asked about his future plans, especially if he will continue racing both events, Socks says, “The reason I love competing in the 400m is that it helps to improve my speed, but I am first and foremost a hurdler.” And that speed is going to come in handy, because his coach, Hennie Kriel, believes that Socks has a realistic chance of being good enough in 2019 to compete for the first time in the hurdles at the Senior World Champs. “I do not doubt that Socks has the makings to become one of the greats of international athletics. He has the hunger and is a quick learner. To top it all, he has ‘big match temperament.’ For him, it is a case of when the going gets tough, the tough get going.”