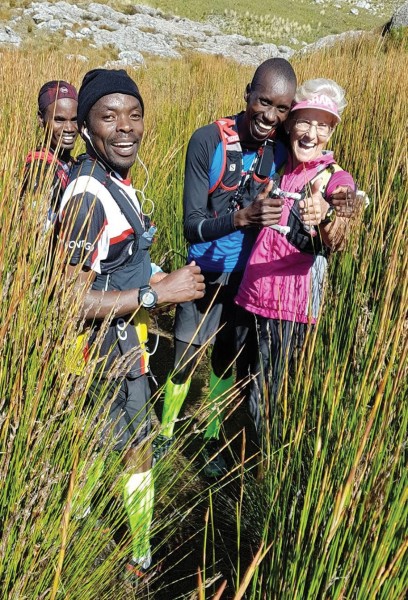 Seven years after running her first three-day AfricanX Trailrun at the age of 67, evergreen Marianne Nelson returned in 2018 to give the race another go, and by the end of the event she had once again captivated the hearts of all who were there. – BY SEAN FALCONER

A tradition at the AfricanX Trailrun presented by Asics is the annual awarding of the Sanet Wentzel Spirit Trophy, presented to a runner or team that embodies the best spirit in the event. In 2011, it was awarded to best friends Marianne Nelson and Cathy Taylor, who had taken on the gruelling event aged 66 and 67, in spite of never having done any technical trail running before, let alone a three-day stage race! Undaunted, Team Grannies not only coped with the tough trails, but finished each stage with beaming smiles, no matter how long they had been out there, and they received a standing ovation when they received the trophy. That’s when their fellow runners heard the real inspiration for their run: Tragically, both had lost a son in a car accident, and they had decided to run AfricanX in memory of their loved ones.

Fast-forward to 2018 and Cathy is unfortunately no longer able to run trails following a broken ankle, but Marianne is still lining up most weekends for shorter trail races all around the greater Cape Town area. “Naturally, that first AfricanX remains one of the highlights of my running career, and it triggered me to really get into trail running,” says Marianne. “After my son’s death, I wanted to get away from the competitiveness of road running, and I realised out in nature there is a more relaxed atmosphere. Also, the Western Cape really has some stunning trails, and every run is a highlight for me.”

PLAY IT AGAIN
And so, with her 75th birthday coming up in December and her eyesight deteriorating – she now prefers to run just behind somebody that can guide her through the technical sections – Marianne decided this would be the last year she could attempt the AfricanX again. “Year after year Cathy and I had said we wanted to do it again, but she unfortunately couldn’t, so I asked my friend Marlene Nel if she would run with me.” Entered as Team The Young and the Restlezz, they ran virtually every trail race on the calendar in the build-up to AfricanX, sometimes even two on a weekend, but Marianne admits they were still a bit worried about intermediate cut-off times for the various stages.

“I was worried that we wouldn’t make it, but in the end we actually ran quite comfortably. I think it was just so wonderful that a young woman like Marlene would be willing to run with me all that way, and the support from all the other runners was incredible. Every moment was precious, a wonderful experience, but best of all was coming in to finish day two and seeing Cathy waiting for me, and then having my husband Alan as well as my daughter and daughter-in-law waiting for me on day three. To be welcomed home by so many people who had shared this dream was a marvellous surprise, and I was just so full of emotion at realising I had done what I had dreamt of for so long.”

RUNNING BACK TO HEALTH
Remarkably, there is another aspect to this story. What nobody knew back in 2011 when the Grannies won the trophy was that both had only taken up walking in their mid-50s to combat serious medical conditions. Marianne had been diagnosed with severe osteoporosis in her back and feet, while Cathy had severe osteoarthritis, and the two met when they both joined Run/Walk for Life in Durbanville, under doctor’s orders to begin walking to strengthen their bones. Running was strictly forbidden!

The two became inseparable friends and quickly progressed from social walking to competitive race walking up to 20km on the road and 10,000m on the track, and by 2009 both had been awarded national Masters colours. They also began running, earning provincial colours in road and cross-country, and Marianne went on to run the Comrades twice, at age 60/61, with her late son, Lafras. “I never knew I would be able to do something like that, but thankfully they had extended the cut-off to 12 hours, otherwise I would never even have gone.”

MAKING AN IMPRESSION
As an incredible sidenote to this year’s AfricanX, Marianne and Marlene were training in the Jonkershoek Nature Reserve near Stellenbosch earlier this year, when they ran into a group of men also checking out the AfricanX route. One of these elites took one look at Marianne and shouted out, “Granny!” That was Bernard Rukadza, who went on to win the AfricanX for the third time this year – he still remembered her from that 2011 race, and that shows just how much Marianne inspires those around her. Typically, her humble response to that is, “I’m just happy doing nice trail runs each weekend. My bone density is now up around 80%, and I want to show people that age is a state of mind, that if you put your mind to something, you can do anything!”