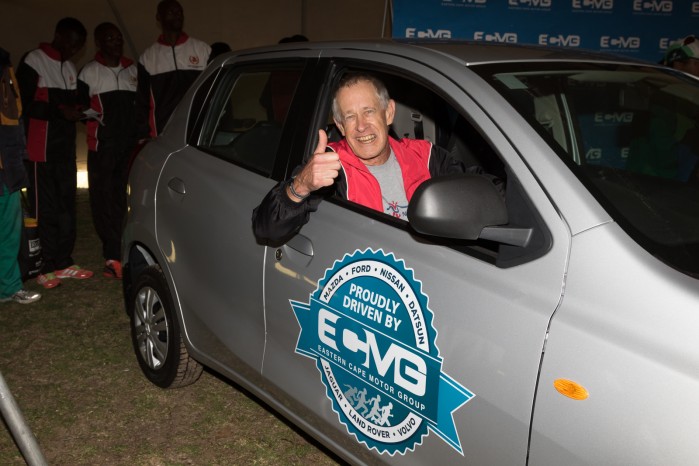 For the third consecutive year the often windy city of Port Elizabeth produced a perfect day for running for the Nelson Mandela Bay ASA Half Marathon Championships on Saturday 28 July, and the athletes took full advantage, with personal bests, season bests, list leaders and national records throughout the field and age categories.

In the men’s race, Stephen Mokoka (Gauteng North) out-kicked the rest of the leading pack to snatch the win in 1:01:44, beating Kenyan Benard Bil by two seconds, with another Kenyan, Linus Ruto, a further two seconds back. Fourth place went to Elroy Gelant (Central North West) in 1:01:48, with Gladwin Mzazi (Central Gauteng) fifth in 1:01:49. Six of the next nine South Africans clocked PBs.

With foreigners and those SA runners who were not members of provincial teams not eligible for the national championships, this saw Mokoka claim the 2018 SA Half Marathon title and gold medal, with Gelant and Mzazi earning the silver and bronze medals respectively. It was Mokoka’s eight SA 21km Title, and the second time he has recorded a hat-trick of three consecutive wins, with his previous wins coming in 2008, 2009, 2011-13, 2016 and 2017. Remarkably, this win was his 27th SA title across all three running surfaces (road, track and cross country).

Mbhele Wins Women’s Title
Foreign athletes dominated the women’s race, with Lesotho’s Mamorallo Tjoka taking the win in 1: 10:46, a massive personal best by almost three and a half minutes and shattering her own Lesotho national record, set 11 years ago! She finished five seconds ahead of second-placed Helalia Johannes of Namibia, whose 1:10:51 also broke her own longstanding national record of 1:10:59, set in 2008. Third home was Kenyan Susy Chemaimak in 1:12:32.

Janet Mbhele of KwaZulu-Natal was the first South African woman home in sixth place, clocking a personal best 1:13:07 to win the SA title and gold medal. The next South African over the line was Lebogang Phalula (Central Gauteng), who finished ninth in 1:15:31, with her provincial teammate Christine Kalmer just three seconds behind in 10th position to claim the bronze medal. Defending champion Cornelia Joubert was 13th in 1:16:06, while René Kalmer, the winner of 40 SA titles, the most by any SA athlete, was 22nd in 1:19:12. Seven of the top eight women set PBs.

And the car goes to…
This year’s event saw a new, faster route used, with an out-and-back section on the beachfront, then a loop followed by the same out-and-back section. There were a total of 1424 finishers, (888 men and 536 women), which was a sizable increase on last year’s 1166.

While most of these athletes were not in the running for national titles, they were all in the running to win a brand new Datsun Go, proudly sponsored by Eastern Cape Motors, in the lucky draw at prize-giving. And you could not wipe the beaming smile off the face of Bruce McEwan of Achilles Club, when his name was drawn for the hat!