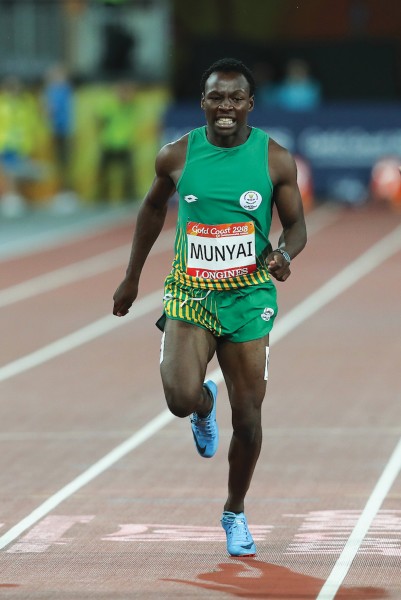 While some described Clarence Munyai’s fourth place in the Commonwealth Games 200m final as disappointing, it was actually an incredible achievement by an emerging young star. – BY SEAN FALCONER

One of the headlines on a well-known South African online sport portal that caught the eye during the recent Commonwealth Games in Australia was “Munyai Flops in 200m Final on Gold Coast.” That headline showed just how much expectation SA’s sprinters currently carry on their shoulders. After all, it wasn’t so very long ago that our men’s sprinting was in the proverbial doldrums, with the SA Record for 100m having been stuck on 10.06 for more than 20 years, and none of our sprinters making finals on the world stage, let alone medalling.

However, in the last few years the 10-second barrier has been beaten by five SA speedsters, including Akani Simbine, who made the 100m final at the 2016 Olympics and 2017 World Champs, while Wayde van Niekerk has dominated the 400m at Olympics and World Champs, with a World Record as well. We also had Anaso Jobodwana in the 200m final of the 2012 Olympics, and he won bronze at the 2015 World Champs.

Meanwhile a crop of sprinting youngsters, including Clarence, were coming through the ranks, medalling numerous times at World Youth and World Junior Champs and pointing to even bigger things to come in SA men’s sprinting. And while the focus was on Akani in Australia – which he responded to by winning the gold medal in the 100m final, with teammate Henricho Bruintjies claiming the silver – there was also immense pressure on Clarence, especially after his recent performances on SA soil. He went on to finish a very commendable fifth in the 200m final, later being promoted to fourth following the disqualification of the winner for a lane infringement, but that prompted the “Flop” headline, and some people seemed to have forgotten that Clarence only just turned 20, and this was his first major final at senior level. In other words, it was nowhere near being a flop!

YOUTHFUL SUCCESS
In 2016 Clarence won the SA Senior and Junior 200m titles, and finished fourth in the 200m final at the IAAF Under-20 Championships in Bydgoszcz, Poland. His win at the senior SA Champs made him the second-youngest ever National Champion, and one of only three 18-year-olds to win an SA title. That saw him selected for the 2016 Rio Olympics, alongside friend, rival and fellow 18-year-old Gift Leotlela. In Rio, neither was able to progress past the first round of the 200m, but they took home invaluable experience of competing at the highest level. Then in 2017 he won the African Under-20 Champs 200m gold medal, and represented SA at the World Champs in London, but was unfortunately disqualified in the first round for stepping out of his lane.

Fast-forward to 2018 and Clarence has enjoyed a breakthrough season. At the Gauteng North Champs in late February, he clocked 10.10 for 100m, improving his personal best from 10.20 – and if he had done so just four days earlier he would have set a new SA Junior Record, but he turned 20 on 20 February. Afterwards, he said he was ecstatic about his performance, but he still preferred the longer sprint event. “The 200 metres is my favourite distance – I am way faster in it – but I know I am capable of running a sub-10 for 100 metres and sub-20 for 200 if the conditions are right. But I am not going to get obsessed with it. It will happen. I just need to make sure that I keep on doing the small things right.”

Just three weeks later he lived up to those words. At the SA Champs, in front of his home crowd at Tuks, he smashed the SA Record for 200m with a time of 19.69 seconds, eclipsing the 19.84 set by Wayde in 2017 and giving him the tenth-fastest time ever in the world. He was justifiably proud of the achievement: “I’m only 20 years old, and to run 19.69 at my age is something I never dreamt would happen. That is why I almost did a complete victory lap afterwards!”

HOPES OF A NATION
That saw Clarence head to Australia as the fastest man in the world this year, with many in SA expecting him to return with a medal, but a tightening hamstring saw him slow up perceptibly with 50m to go in the semi-final, where he finished second in 20.36 with the overall second-fastest qualifier. Then he clocked 20.58 for his eventual fourth position in the final, but aggravated the hamstring strain, and was thus forced to withdraw from the SA 4x100m relay team that went on to win a scintillating silver medal.

Although disappointed, Clarence still managed to take the positive from his Australian outing. “Unfortunately, the hamstring injury that hindered me in the heats flared up again, and I knew it was going to be a tough challenge even before I settled in the starting blocks. Still it was my first major final, so I am happy to have finished. And now that I have done a 19.69, I think it will obviously put me under pressure. I will have to step-up my game!”