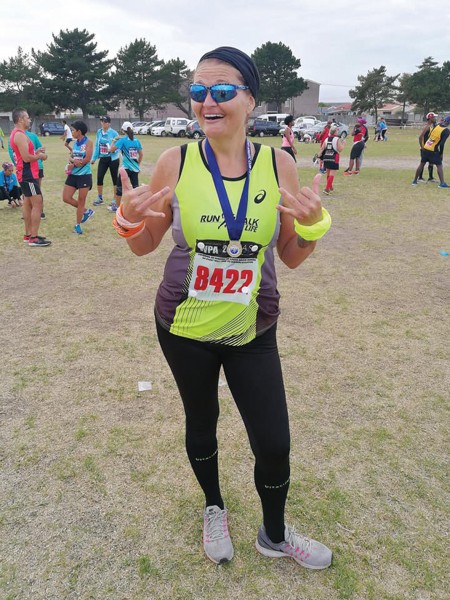 Thanks to running, I have overcome osteoporosis, an eating disorder and depression, and while I was never an athlete before, I am now working up to my first full marathon. Has it been easy? Hell no, but I keep moving forward! – BY CHERYL GREEN

When I fell and broke my wrist in 2006, I thought nothing of it… just another broken bone. Two years later I twisted the same wrist and landed up in theatre with another broken bone. Then I had a major shoulder operation, and discovered that I had all kinds of aches and pains, stiffness in the joints, and regular health problems. After many tests and scans over the years, I was finally diagnosed with osteoporosis, also known as brittle bone disease.

At first I did not tell anyone, not even the people closest to me, because I did not want people to make a fuss about it. After all, I was only 35 at that stage! Slowly, however, I fell into depression, and that led to binge eating. Then in 2013, my family was faced by the suicide of a very close family member, which led me to fall even deeper into depression. My life became a living hell, and my relationships, work and financial state were all affected.

Then one day in October 2016, just by fate, as I was looking to get McDonald’s in Green Point to feed my emotional hunger, I found myself in the middle of one of the larger running events in Cape Town, the Gun Run. Surrounded by happy runners, I pondered whether I would ever be able to do just a 5km fun run.

Hitting the Road
That same week I decided to dust off my old training shoes and go for a run around the block. I managed about 800m before my body could no longer take the strain, and ended up on crutches, because of my weight. Reality struck when the doctor told me I would be facing a depression clinic soon, and a wheelchair by the age of 40, so that day I promised myself I would start looking after myself, so that my children can grow up with a healthy mother.

In January 2017, when I weighed in at 107kg, my work decided to start a weight-loss challenge, and with a lot of motivation from my colleagues, I forced myself to join a gym. I had never seen the inside of a gym before! I lost 8kg during that challenge, and for the first time started thinking it would be possible to do a 5km. And so I entered the Spar Women’s 5km in April 2017, which I completed in just over an hour and held my medal with pride, as if I had just won the lottery. I also fell in love with the running community and decided that this is what I want to do.

Around that time I started posting about my journey on Facebook, and in one post I asked, “Is it possible to run the 21km Two Oceans once in my life?” In response, the CEO of Run/Walk For Life contacted me and offered me a year’s membership to assist in this goal. I was over the moon, but also sceptical, as I knew my condition wouldn’t always allow me to run. Nevertheless, in June I attended my first training session with a well-qualified coach, Paul Kelly, at RWFL Table View, and started setting myself new goals.

Going the Distance
By August I was ready to line up for my first 10km race in Pinelands, and I cried my way through the race, as I never thought this would be possible. That was followed by a 15km race, and then my first half marathon in October 2017. Each time I reached a goal, I would set myself another, and recently I completed my first 30km. Now I’m training for my first full marathon in September. I have always had it in the back of my mind to run a marathon before the age of 40, and I will be attempting it three months before my 40th.

My journey is far from over. I want to inspires those around me, and tell them that it is possible to change your life. I am now the proud owner of 60 medals of different races, and to date I have lost 27kg. I’m one of the slower runners on the road, but without the slower ones, there wouldn’t be races. I also recently became an Ambassador for Run Walk for Life and Asics, something that I never thought would happen to me!

Whenever I’m feeling down, I go for a jog to clear my mind and breath in fresh air. Support is also very important, and since I started telling my story, my support system has grown from strength from strength. My depression and eating disorder are now under control, and while I will always have osteoporosis, I have decided to live with it in a healthy way. I now dedicate every step I run to those that suffer with a condition, be it depression or a disease, and I believe that the main thing is to find what you love and run with it!