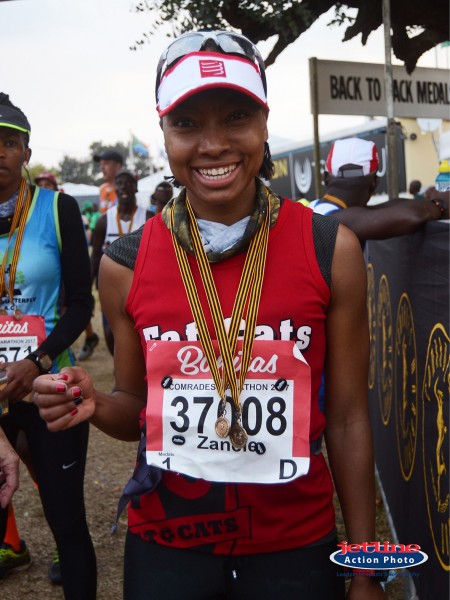 After her father committed suicide in 2008 due to severe depression, Zanele Hlatshwayo turned to running to help her through the heartache and her own depression. Now this ultra-marathon runner is running 18 races in seven months to raise awareness of and funds for the treatment of this condition. – BY SEAN FALCONER

Depression is a silent killer in South Africa: Statistics show that 23 people commit suicide daily, mostly men, and there are hundreds of attempts on a daily basis. To make matters worse, depression and mental health issues are stigmatised in many South African communities, so many people do not speak about these issues, and this only adds to the distress of both the sufferers and those whose loved ones turn to suicide.

Having lost her father to this debilitating condition on 16 June 2008, and then suffering depression herself as a result, Joburg-based Zanele decided that 2018 would not only mark the 10th anniversary of his passing, but could also be her opportunity to do something to challenge the stigma around depression and suicide. This inspired the 33-year-old analytical specialist for Google SA to take on 18 races between January and July 2018 for her #Rise18 campaign, not only to raise awareness of the problem, but also to raise R180,000 for the non-profit South Africa Depression and Anxiety Group (SADAG), Africa’s largest mental health and advocacy group.

“I was very close to my dad – he would take me to school, to restaurants, he even used to take me to the hair salon, and it was only later that I realised he did that for me to show me how a man should treat me. There is a lot of stigma in the black community around suicide, so I always felt it was an injustice that he was thought of in that way, as he was a good father to myself and my younger siblings, and he was a good person that was always helping people. This campaign is my way to demystify suicide and mental illness, and to redefine my father,” says Zanele.

“I want to help SADAG through raising funds so that they can maintain the costs of running the organisation, because depression and suicidal thoughts are personal struggles I had to face when my father took his life. And since running is a sacred experience for me, a mechanism that helped me deal with his death, what better way to help those who might be going through similar experiences than through the power of running?”

RUNNING CHALLENGE
Having found solace in her running and gymming, Zanele decided to take her running more seriously four years ago and began entering races. Having built up steadily through the distances, she ran her first Comrades Marathon in 2016, and a second the following year. She has also completed the Old Mutual Two Oceans Marathon and Old Mutual Om Die Dam Ultra twice each, and has another 10-plus marathons under her belt. She is therefore more than capable of completing 18 races in seven months, but this year she will push herself to new limits when she takes on the Washie 100 Miler in July as the 18th race of the challenge.

“When I started planning this challenge, I decided I want to complete 18 races, so I have spread them out, including some 10km races, but also including the Kosmos 3-in-1, Two Oceans, Comrades and the Washie,” she says. “I’ve got my list of races pencilled in, but the list has to be flexible, due to the fact that I travel a fair amount for work, but the big races will stay. The Washie will be a big step up for me, and from a fundraising point of view, it will require some help, as you need your own support team, so I’m looking for support from a car brand, or accommodation, or a sports brand, to make the final push of my fundraising challenge possible.”

Having launched the campaign in January, with social media and YouTube elements, Zanele says she has been overwhelmed by the response, especially from people sending messages about their own experiences. “It made me realise how many more people are affected than we know, and I want to share their stories too, because this is so much bigger than me. I’m also getting more and more requests from runners who want to join me in various races, to help me rise and demystify depression and suicide, and lend a helping hand to those who need it.”

You can support Zanele in her journey to rise against depression and suicide by following her at www.facebook.com/Rise18Zanele or www.twitter.com/zanhlatshwayo, and you can make a donation via www.backabuddy.co.za/rise18.