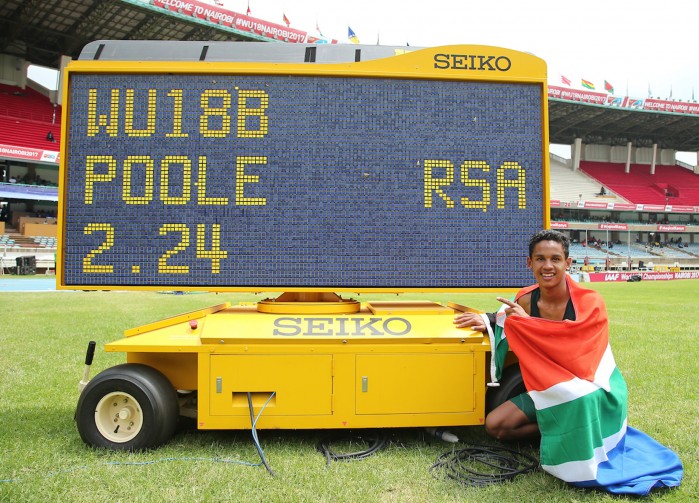 One second he was a talented schoolboy athlete showing a lot of promise, the next he was a World Champion, and now 17-year-old high jumping prodigy Breyton Poole is about to jet off to Australia for the Commonwealth Games! – BY SEAN FALCONER

Being selected to represent your country at the Commonwealth Games is one of the highest honours a South African athlete can achieve, and this April the best of our athletes will be in action in Australia – and one of the most excited will undoubtedly be Breyton Poole. Having been crowned World Under-18 Champion last year in Kenya, he has been included in the senior SA team for an international meet for the first time, but he actually didn’t believe it at first when he heard he had made the team.

“The funny thing is I was actually in maths class when I got a phone call from my mom, and I thought this might be serious for her to phone me during school, so I answered ‘skelmpies’ under the desk, because I sit at the back of the class.” he recounts. “She told me I made the final team, and I thought no, she must be joking, but she said it was just on TV – she had taken a photo of the final team on the screen and sent it to me in class. I was just so shocked!”

Speed Jumper
That will see the youngster competing against top-level senior jumpers in Australia, and many will see his inclusion in the team as a good way to get top-level experience, given his age (he turns 18 in late March) and the fact that he is still growing. At 1.73 metres tall, he is actually quite short by high-jumping standards, and when he won his World Champs title last year, the second-placed jumper was some 20cm taller than him. When they stood on the podium for the medal ceremony, Breyton was still shorter than him, in spite of being on the higher step on the podium! However, he says the whole question of his height simply doesn’t bother him.

“It’s an age-old thing now for people to ask if I am not too short to be a high jumper, and I’m used to it now. My height doesn’t hold me back, because I’m a speed-jumper. When I started working with my coach, Bennie Schlechder, he immediately shortened my run-up to just nine steps, because the taller guys need a longer run-up, whereas I am quite ‘rats’ and do better with a short run. That’s why I do more speed work in training these days. And the fact is, being short has actually motivated me to jump even higher to prove those people wrong.”

And that he certainly can do! He went to Kenya with a personal best of 2.18 metres, and when he reached 2.14 he had already won the competition, but he wasn’t even close to being finished. “My coach told me the competition is not over just because your competitors are finished, and since I had worked to peak for that competition, he said I must go on and see if I can beat my PB. I was feeling elated at having won the World Title, and thought what the hell, let’s go for it.”

“I cleared 2.16, then skipped 2.18 and went for 2.20. Having set a new PB, I felt I still had more in the tank, so I jumped 2.22, and then cleared 2.24 on my third attempt! That was quite nerve-wracking. I’m not sure if they showed it on TV, but I went on to attempt 2.27, which would have put me at the top of the junior rankings for the year, but I didn’t clear that height. That didn’t matter, because I was just thrilled to have won, and achieve my goal of a new PB!”

Big Jump
Breyton, who started high jumping in primary school after initially doing gymnastics, went on to jump 2.25 in November last year, in a league meeting in Cape Town, and that meant he qualified for the Commonwealth Games, but the selectors still had to make the decision whether to send a youngster with no senior level international experience. “It’s a big thing for me, because I’m taking a massive jump straight from the under-18 youth ranks, past the under-20 juniors to the senior team, and I will actually miss the SA Under-20 Champs while I am in Australia, but hopefully I can compete with the seniors,” says Breyton.

Besides the Commonwealth team, Breyton has already qualified for the preliminary SA team for the World Under-20 Champs in July, but is quick to point out that he is not just focusing on athletics at the moment, as he needs to make sure he doesn’t neglect his schoolwork. He is busy with Matric at Paul Roos Gymnasium in Stellenbosch, and is determined to study business or marketing at the University of Stellenbosch next year. “I will continue jumping, but I want to study before any thoughts of going full-time with athletics. That said, if I can perform well this year, I might get some invites to jump overseas. I have jumped the qualifying mark for the Diamond League, so let’s see what happens.”