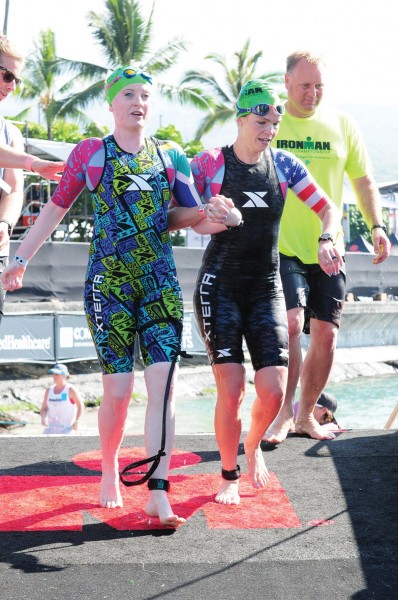 The Ironman World Champs race in Kona, Hawaii, is considered one of the toughest sporting events, and when blind triathlete Helen Webb crossed the Kona finish line this October, she added yet another chapter to an already impressive and inspiring story. – BY SEAN FALCONER

Born with just 10% vision caused by albinism, a congenital disorder characterised by the complete or partial absence of pigment in the skin, hair and eyes, Helen Webb has spent her whole life trying to change perceptions of people with disabilities. “I was bullied at school and told that I was a monster, and even though that stopped when I reached my 20s, I still felt I was not good enough,” she says. However, that all began to change when she set out to show what she could do, both academically (she has a Ph.D. in chemistry) and physically. “Prior to running and triathlon, I felt like I was not really achieving much in life – it was just about how I viewed myself – but triathlon has helped me see myself as an extraordinary visually impaired person, and I hope my story will inspire others to do the same.”

Helen (37) was born in London, spent 10 years in the USA and then moved to SA at age 11. Growing up in Johannesburg, she says she was not at all sporty. “I was actually not allowed to participate in sport, because I had a severe lack of eye-hand co-ordination, on top of albinism, which meant I couldn’t spend that much time in the sun. Then in my early 20s a friend took me for a 5km run, and to my surprise, I didn’t die, so I began running, up to half marathon distance. I found that my eyesight was not an issue, but I’m not particularly fast, because I’m only in control of about 1.5m in front of me. On the track I can bang out four minutes a kay easily, but on the road I’m lucky to do seven minutes a kay.”

Next Challenge, Please
At 31 Helen felt she needed a bigger challenge. “I decided to run the Comrades, because that’s what you do in SA… I did lots of marathons, but for two years I couldn’t get any faster to qualify. Then in 2012 I began doing speed training, and got my marathon down to 4:30. Starting my first Comrades was a big thing for me, but by 20km I felt exhausted and overwhelmed. I couldn’t overtake people because I have no depth perception, and then just before halfway I tripped on a cat’s eye and fell. I was covered in blood and my knee was really sore, but I carried on till Cato Ridge at 68km, where I eventually dropped out. It was only afterwards that I realised I had a broken bone in my hand and torn ligaments in my knee!”

“I went back in 2014 and finished the race, but again the start was difficult and I couldn’t cut across other runners to get water, so I did 30 to 40km without water. I ran it again 2016, but by then I had already decided I wanted to do Ironman, even though I was terrified of the water.” In fact, Helen says just trying to swim in the pool left her literally unable to breathe from anxiety, but she still went to the Ironman in PE to help as a volunteer and see what the race was like. “I heard people say look at the swimmers at the buoys. I couldn’t even see the water’s edge, let alone the buoys… and the people were doing 60 kays an hour or more on the bikes. I thought I could literally kill somebody if I did the wrong thing at that kind of speed!

Down, But Not Out
Feeling devastated, the PE trip made Helen realise she would need help if she wanted to achieve her Ironman goal. “From a young age I had been told I would never be independent, or live by myself, but I had gained a lot of independence through running. It was therefore a huge thing to accept that I would need a guide and a tandem bike to do Ironman. That’s when I contacted Derick Marcisz, as I had several friends who had been part of his Dare to Tri programme. He very kindly offered to fetch me in the mornings and guide me in pack runs, and helped me find a borrowed tandem to ride.”

“Now the challenge was to find a female guide, as per the ITU rules, and I needed somebody who could deal with my panic in the water, and also put up with my slow speed on the bike and run. In the end, we made a desperate plea on social media late in 2016 and found Desi Dickinson, an elite age grouper who said she wanted to give back to the sport. From the end of October 2016, she dedicated her training time to me for Ironman 70.3 East London, and then Ironman Port Elizabeth. I had never expected to find somebody of her calibre willing to give up everything for me!”

When Helen went to East London in January, she was still panicking about the swim, and to make matters worse, the sea was so rough in the days leading up to the race that she and Desi could only do one short sea swim. “I did that first swim in a panicked state, feeling like I was going to drown. I was actually incredibly lucky that Desi had lifesaving skills, because after just 300 metres I had physically given up and she had to pull me back in. Once back on the beach I collapsed from shock. That evening at supper I told Derick I didn’t think I could get back in there tomorrow, but he just said he wasn’t going to entertain my doubts, and that he knew I could do it… so I thought, why not.”

Fortunately, race day brought calm seas and Helen says the swim was actually amazing. Despite tough bike and run legs, she came home to claim her medal, ecstatic to have conquered her fear. She and Desi then went on to finish the Full Ironman in PE, but Helen says that really took it out of her. “After PE, I was broken psychologically, because in the middle of preparing for the race I had left my job under difficult circumstances, and had no income for four months, so I didn’t even know if I was going to make it to PE. The day before the race, Desi asked if I was scared, and I told her no, because it hurt much more getting there.”

Surprise Entry
Then in May Helen found out she had won a slot for Kona in the lottery, but given her state of mind, and finances, she thought she would have turn it down. “I didn’t think I could do another six months of this, and I would need to ask my guide to go at her own cost, and for no reward, since guides are not considered official entrants. But then I thought this is a once in a lifetime opportunity, so I phoned Desi, even though I knew she had her own commitments and goals. I was already amazed that she had given me two races and six months, so I wasn’t surprised when she said no, and I will remain forever grateful for all that she did for me.”

Fortunately, Helen soon found a replacement. “One name that kept coming up was Caroline Gaynor, from the USA. She had already guided some 20 athletes in about 40 races, including eight full Ironmans, making her probably the most experienced female guide in the world, so I asked her and she said yes. I continued training with various guides in SA, then went over to Kona five weeks before the race, and was incredibly lucky that the whole tri community got together to look after me. Caroline arrived the Monday before the race weekend, and when my tandem arrived on the Tuesday, we rode together for the first time. Thanks to all her experience, she knew exactly how to guide me right from the start.”

Come race day and Helen says the swim was actually easy, but the bike leg was much harder. “We did a lot of climbing into a headwind, but the worst was the heat radiating off the road and lava fields. With albinism, I am sensitive to heat and sun, and by the time we got to 120km, my head was sweating profusely, my jaw locked, and I felt like I was going to black out. I couldn’t talk, but Caroline quickly realised I was developing heat stroke, so she stopped at an aid station and told the volunteers to put ice in my tri suit. I wasn’t even ‘there’ at that stage, but once my core temperature dropped I was fine again, so we said let’s get this race done.”

Another problem hit them about 15km into the run, as night fell. “We had lights in our special needs bags, but they were only at 28km, and it was pitch black out on the highway, so now neither of us could see much. We had to walk a long section while trying not to collide with other runners, and when we eventually got to the finish in 16:27, Caroline was in tears, whereas I was fine. I think the emotional stress of the day got to her, whereas I had my nervous breakdown three days after the race, when I realised there was no more need for training, or finding a guide, or dealing with logistics. I just balled and balled and balled!”

True Bravery
After her remarkable journey to the finish at Kona, Helen has received many messages of congratulations, but she quickly downplays her achievement. “People say I am so brave to race Ironman, but race days are actually easy, as I have somebody to guide me, and do things for me. I think leaving my house and going to work every day is my true bravery, and some of my hardest moments are just going to the shop and trying to buy a tin of tuna, because I can’t see the shelves, or the people, or the till. I don’t want to take anything away from people who finish Comrades or Ironman, but my day-to-day struggles are much bigger than that, so I hope my story will inspire others, and hopefully one day we will see a hundred visually impaired athletes doing Ironman.”