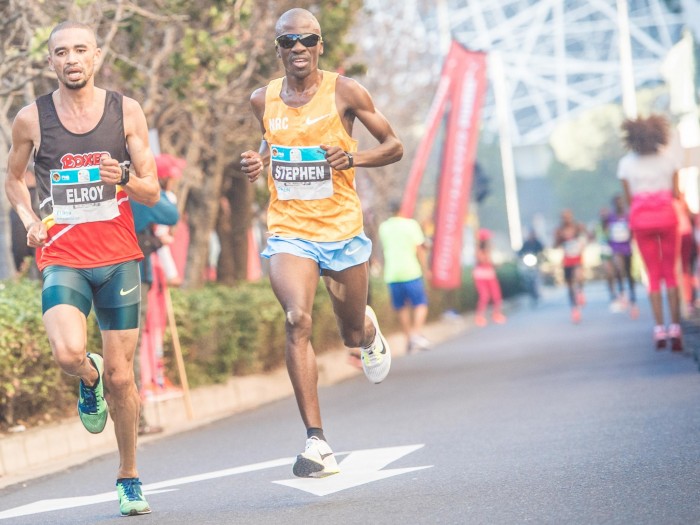 In 2016, Elroy made the men's 5000m final at the Olympic Games in Rio, clinched a silver medal in the 10,000m at the CAA African Championships in Durban, and set a new South African 5000m record along the way when he clocked 13:04.88 in the Netherlands. It was a brilliant year on the track for the Potchefstroom-based athlete. Then at the 2017 SA Champs in his current hometown, the 31-year-old started the 5000m too fast and hit the wall with 2000m to go, but held on through sheer determination for the silver medal, and came back the very next day to win the 10,000m national title.

Unfortunately, he did not quite do enough to qualify for the 2017 IAAF Track and Field World Championships, but that disappointment was tempered not only by his continued success on the track, but also his success on the road. This year has also seen him take home another silver medal at the South African Half Marathon Championships, clocking a blisteringly fast 1:01:30, and he ran an equally fast 28:16 solo effort for 10km in Cape Town, which until recently was the fastest time in SA for the year. Then he made the big move – one he has been talking about for a while now – and stepped up the marathon for the first time, at the Sanlam Cape Town Marathon in September.

Going Long…
“Last year I was a pacemaker at the Sanlam Cape Town Marathon, so this year I decided it's the perfect time to make my full debut. After making the decision, I was totally excited to train for it,” says Elroy, whose 1:01:10 half marathon PB, set in 2014, and a 2017 best of 1:01:30, pointed to him being able to post a really fast marathon time. He ran just behind the leaders until the 30km mark, then tried to close the gap, but found himself running alone for the last 5km and ended up slowing down a bit, eventually finishing in 2:12:49, earning him fifth place overall and first South African over the line, but falling a bit short of his own high expectations.

“My goal was to go beyond my limits and I was looking for a 2:09 or 2:10 debut marathon time, but those last 5km were extremely difficult. I needed to believe I could achieve what I had set out for the race, but I can definitely use these opportunities to learn and prepare for future global marathons, and I am very positive to one day run a good time in Europe.”

However, having said before the race that he hoped to use it as a stepping stone towards qualifying for the marathon at the 2018 Commonwealth Games in Australia, in a somewhat surprising move, soon after the marathon Elroy said he is putting the marathon on hold – for now – because he still has goals to chase on the track. “This is a very brief outline of my main goals for the next few years. In 2018 I’m going to attempt to break the South African 5000m, 10,000m and 10km records, and my goal is to finish in the top three at the Commonwealth Games. In 2019 I’ll again be attempting the 5000m and 10,000m records, but I will also be targeting a sub-2:08 qualification marathon, and in 2020 my main goal will be a podium position in marathon at the Tokyo Olympics.”

The Challenge
Away from athletics, Gelant enjoys spending time at his family home in Pacaltsdorp, on the outskirts of George in the Southern Cape, where he was taught the importance of living a purpose-driven life. “What keeps me motivated is the belief that God provided me with a talent, and I want to live out that talent fully by giving my best in each race I participate in. Every time I compete, I run against not only the other guys, but also myself and my own ability. It's the best feeling to know that I gave my best on the day, and all of my failures in athletics just serve as extra motivation. Winning medals or championships is only a bonus for me; it's all about my God-given talent and the happiness that comes with it.”