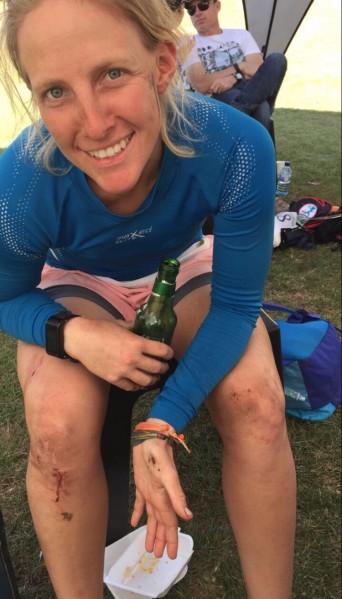 There I was, a tree root grabbed with both hands, my legs dangling off the side of the mountain, looking up for a way to pull myself back from the cliff I was hanging over, so that I could carry on with the race… – BY Carla Lea Farina

OK, OK, it wasn’t quite so dramatic, but it was pretty close, and you know what was going though my head? You’d think it would be, “If I fall I will plummet down a mountain and never see my family and friends again, not to mention my puppy.” But no, I was thinking, “If I fall down here, how the hell am I going to get back up this hill again with enough time to finish the first day before cut-off?” After all, I had been told that if I didn’t finish the race, I should give my race T-shirt to the nearest beggar, because you never wear a race Tee that you haven’t earned… ever!

Wait, let’s rewind a bit… Friday morning, the car is jam-packed with racing and camping gear, and we are headed to Kruger to Canyon, a two-day trail race that I signed up for after being bitten by the trail bug at the Three Cranes Challenge. I loved everything about that race – the atmosphere, the trails, the camaraderie, the war stories and the laughs – and was looking for more of the same.

Driving up to the school which was to be the race village for the weekend, I looked up to check the weather… and all I could see was a tall, steep monster of a mountain! Gulping in near panic, I turned to my good friend and running mentor Su-Yen, and said, “Please don’t tell me we have to climb that!” As much as I enjoy downhills – mostly because I lack the emotion of fear, and apparently have no brakes – the thought of that climb didn’t fill me with enthusiasm, and at race briefing that evening, the first day’s route profile just left us all speechless.

Going Up?
The following morning, the first day started with a short but pretty much vertical uphill. Then, after a few gentler ups and downs, the mother of all climbs hit us, seemingly covering tons of different terrain, but Su-Yen gave me useful tips along the way as we kept each other company. (Sidenote: We sure do know how to talk rubbish. In fact, we are hilarious, although most of the time we’re the only ones who think so. “You’re a spaz, no you’re a spaz, what are you spending your fake money on, let’s do the Dusi… all in the same conversation).

Fortunately, the laughter and insightful conversation made the climb bearable, and finally, after hallucinations and a lost sense of humour or two, we made it to the top. Then came the downhill, and maybe it’s the adrenaline, maybe it’s my lack of fear, but I flew down that mountain. No, literally, I flew!

I tripped twice, landing on my face and eating half the mountain, but I still was having the time of my life. Then I turned a corner, lost my footing and next thing I knew I was hanging off the mountain… and even that was fun! I just pulled myself back up, dusted myself off and carried on. And when I finally reached the bottom and crossed the finish line, that mountain was now something I had conquered, and not something I was afraid would conquer me.

Animal Spotting
That night, Race Director Andrew’s race briefing for day two was hilarious. “This is Big 4 territory you’re running through, so if you see a rhino, run and hide, because they’re blind, but, if you see an elephant or lion, don’t run. If you run, they will chase you, and they will catch you. Just stand still and phone us,” said Andrew. (Cue nervous laughter from the runners.) “Why are you laughing? I am serious!” he exclaimed.

The next day I was sort of hoping to see some elephants, but the team patrolling the area had done a fantastic job of sweeping the route and I had an absolutely wonderful run through the bush… except for the part where my bladder exploded. (The one in my hydration pack, not my actual bladder!) I was soaking wet, badly chafed, and had no water to drink – thank goodness for the amazing water tables – but more importantly, the bladder had leaked all over my cell phone… so I would have had a really rough time calling anyone had I encountered a lion or elephant!

Later that day, after the most amazing weekend, we waved goodbye to our mountain, and I thought to myself, so often in life the things that scare us most, or seem the most impossible, are the most rewarding. Had we not climbed that mountain, I would never have realised I had it in me. The human body is the most amazing thing, and more often than not it’s our mind that holds us back.