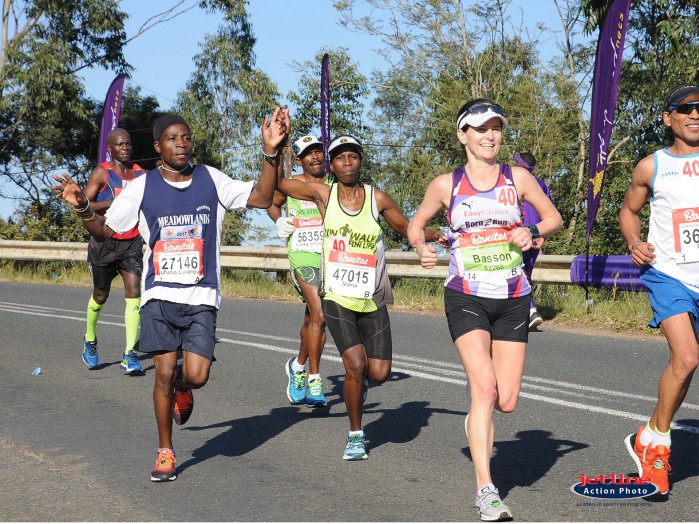 One of the most remarkable things about running is that it is a great leveller: You could just as easily find yourself running next to the CEO of an international company in your next race, or a gardener, or domestic worker. Once the starter’s gun is fired, qualifications and salary count for very little as all athletes compete against themselves to get to the finish line, and one such story has been playing out in the Comrades Marathon over the past few years, as 42-year-old mother of two Maria Vilakazi has steadily climbed the ranks in the women’s field. But she admits that she has made a few mistakes along the way thanks to her stubbornness. – BY SEAN FALCONER

In the 2017 Comrades, Maria crossed the line in a personal best 7:41:42 for her fourth Bill Rowan medal, finishing 20th overall in the women’s field and fifth amongst the veterans. In the process she took just over 24 minutes off her previous best ‘Up Run’ time, adding to her already impressive running story, which began a few years ago after a long break from any form of sport. Born in Mpumalanga, Maria currently lives in Johannesburg, where she works as a cleaner for an IT company. She did some sport in her younger days, but dropped out of school in Grade 10 (standard 8) and stopped all sport as she entered the working world at a very young age.

“I come from a big family, with 10 boys and five girls, and I saw my mom was suffering, so I decided to help her by dropping out of school and starting to work. I stopped sport when I started working, but I used to love running, even though the teachers thought I was a sprinter and always put me in the 100m, because of my body shape. I was never a sprinter, but I still loved running,” says Maria.

DESIRE TO RUN AGAIN
It was many years later, while watching the 2008 Comrades Marathon on TV, that Maria rediscovered her desire to run, and that prompted her to want to go for a 10km jog, but she admits she did not know how to get started. Fortunately, her employer at the time, was more than willing to help when Maria asked for help a few months later. “I was working for Shashika Ramsamy in Bryanston and told her I wanted to start running, so she Googled info for me on beginner running and said I should join a club. Then she looked for clubs in our area and got info for me about the Run/Walk For Life club just around the corner from us. She told me to go ask them if they can help me, so I went and met Michelle Orlando, the branch manager, and she told me to come and join that same day at 4pm. I was so excited that I was finally going to run, but when she made me run just five minutes that first time, I was not happy! I thought, ‘Oh no, this is not for me,’ because my goal was to run 42km comfortably and then run the Comrades, not five minutes!”

With Michelle’s guidance, Maria steadily built up her mileage and went on to run her first road race in early 2009, at the Randburg Valentines 10km, but she admits she was still itching to go further and faster than Michelle was telling her to. “She told me to train and build up from five minutes to 50 minutes, and then run that first race around 60 minutes, but she said I must take it easy. She was happy and said I was in good shape, but now we must build up to 15km, then 21km, and only much later the 42km. I was not happy, because I wanted to go further and faster, but I realise now she knew what she was doing.”

The reason Maria knows this now is because she had to learn the age old lesson of running the hard way: Too much, too soon, may lead to an over-use injury. It happened because she moved from doing that first 10km race to tackling the Old Mutual Two Oceans 56km ultra-marathon just a few months later. “I didn’t listen to Michelle and that led to ITB from overtraining. I still ran the Two Oceans with the ITB, finishing in 5:19:50, but it set me back, and so no Comrades that year.”

DOING IT HER WAY
The following year, she did make it to the Comrades, and clocked an impressive 9:42:39 on debut, but again, her expectations and reality were not quite in tune. “I said I wanted to run my first Comrades in sub-9 hours, because it was 87 kays, and 10km/h sounded doable, but I didn’t realise how far it was, and once again I didn’t want to listen to Michelle about taking it easy in my first one. I was still very happy to cross the line in 9:42, but in 2011 I wanted to break nine hours. I did that second one in 9:24 and got my Back2Back medal, but I still had 24 minutes to take off.”

Once again, the advice of more experienced runners proved true, as Maria overdid the running in 2012 and picked up a stress facture and tendonitis in the same leg, although she still managed a 5:57:12 Two Oceans finish. “I told Beth Hammer, the new manager at Run/Walk For Life, that something was wrong with my foot, because I could only run 1km before the pain came. She got me an appointment with a physio, who told me I can’t run Comrades… but you know us runners, we never listen, and I decided to start and then bail if necessary. It took me a long, long time to finish – 11:37:55 – and I will never advise anybody to run Comrades if you feel pain. I already had to sit down at 10km due to pain, and didn’t think I could do another 79km, but there was no ambulance or bus there, and I was getting cold, so I decided to jog a bit more. When I eventually crossed the line, I thought I would never run again.”

“I was lucky that Beth then worked so hard for me. She made time to drive me to the physio, and told me, ‘Maria, you can’t give up without a fight!’ I was still sure I did not want to run again, but I didn’t want to disappoint her, and I am the runner I am today because of her. Also, I was helped by Neerashi Ramsamy, Sheshika’s daughter, who is a chiro and did fantastic work to help fix me. She always makes time for me, no matter how busy she is, even after hours at home.”

RETURNING STRONGER
Due to the injury and 18-month recovery, Maria missed the 2013 Comrades, but in 2014 she was back with a proverbial bang, clocking 5:42:50 at Oceans and 8:56:27 at Comrades to finally break the nine-hour mark. “Soon as I finished, I phoned Neerashi to share the news that I had done it.” Then in 2015, having won the Vaal Marathon and Colgate 32km, she went event faster, blitzing 4:34:28 at Oceans and then 8:05:44 at Comrades, and the plan was to break eight hours in 2016, but in early May, while out running with training partner Vusi Ludiki, Maria was hit by a taxi and injured her shoulder. That meant she couldn’t train for the rest of that month leading up to the race on 29 May, but she still ran 8:51:49.

In 2017 it all came together as she broke through eight hours and into the top 20. “I can’t explain this year’s race, I don’t know what happened. But I also can’t take the credit for myself – I had two ladies who helped me, Lee and Muriel of the Fitness From Africa (FFA) club, who invited me to join their track training group under coach Marcel Viljoen last November. The speed work really helped, but I still didn’t expect to be selected for the provincial team to run the SA Marathon Champs in Durban.”

The problem was that the Champs were just a week before the Two Oceans, and Marcel told me I can’t race both, so I will have to choose. Since I had never been selected for SA Champs before, I decided to race that, so he gave me pacing instructions to race hard for a 3:10 finish, but I never told him I was still going to save a little bit for the next week’s Two Oceans. As you have already seen, I am very stubborn… Anyway, I found 3:10 quite easy and finished sixth overall and second veteran, then I took the week off, drove to Cape Town and ran my best Oceans time by nearly two minutes, 4:32:35.”

SILVER GOAL
For Comrades, Marcel gave Maria pacing instructions for a 7:41 finish, and that’s exactly what she ran. “He told me he believed I can run a silver if I pace myself correctly right from start, with a 5:10 first kilometre, but I ran 4:30. I think that’s why I didn’t run 7:30 for that silver. Another lesson learnt.” Two weeks after Comrades, Maria ran 85 minutes at the SA Half Marathon Champs to finish second veteran, once again showing her remarkable powers of recovery, and she says the big goal now is sub-7:30 finish for a Comrades silver. “That’s what I will be chasing in 2018, but let’s see what the coach says.”