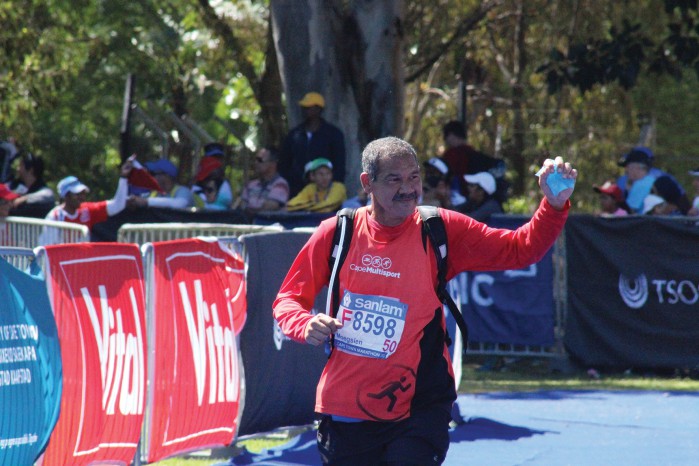 Running has many characters and personalities who bring flavour to the sport, and in the Cape Town running scene, one who stands out from the crowd is Moegsien Ebrahim. He isn’t known for being the fastest runner, but rather for taking amazing pics of his fellow runners, and for not being shy about sharing his opinion about running issues on social media. – BY PJ MOSES

Besides running, and talking about running, another of Moegsien Ebrahim’s passions is taking photos, and it has become the norm to see him at all the races with camera in hand, taking hundreds of photos. His pics featuring runners doing what runners do are found all over social media these days, and he’s become a mini celeb in his own right by being the man behind the lens. “It has become an expectation from people to have their picture taken during races, and everyone is always asking me, where is the camera, when I don’t have it,” says the enigmatic running photographer.

Nowadays hundreds of runners look forward to featuring in a Moegsien Ebrahim pic, and before, during or after a race, they line up smiling and always have a pose ready when they see him. On average, he takes about 400 to 500 pics per race, and it doesn’t matter if it is road, trail or even the cross country events, Moegsien’s camera has become well known at all of them. Thousands of pictures later, he says he still keeps all of the photos he has taken over the years.

ADVENTUROUS SPIRIT
By his own admission, Moegsien is not a natural runner, and he says the running bug bit him fairly late in life, but he adds that it opened up a whole new world to his adventurous spirit. As a nine-year-old, he would disappear from home every chance he got to go play hockey or cricket with his friends, without his parent’s consent. By the time they found out what the young Moegsien was up to, it was too late to stop him, so they just let him be. In the years that followed, it was cricket in the summer and hockey in winter, but when injuries and a declining love of these team sports led him to look for alternative sporting activities, he turned to first walking, then running.

“I just found that staying idle over a weekend wasn’t working for me,” he says, adding that he was soon drawn to the great social vibe amongst the athletes, even though he didn’t know anybody at the time within the athletic community. “At my first event, the FNB Big Walk, I decided to do the 35km walk because I was active and knew that I could do it. During this race I saw quite a few people with these coloured vests and I thought, ‘I want one of those vests.’ So I started looking up running clubs in the phonebook!”

This led Moegsien to join the Celtic Harriers running club and soon he was being spotted walking at many races in his green and white hoped club kit. Then, when he grew tired of just walking, he decided to try his hand at running. “I saw there were many people of all shapes and sizes running, and I thought to myself, ‘I can also do that!’ It didn’t start so well, but I saw people older than me running comfortably, so I thought with time it will get better, and luckily it did!”

OUTSPOKEN VIEWS
Making the most of the busy life running has given him, Moegsien averages close to 80 races a year these days, and the medals and memories have piled up since those early days. “I do not go to movies and I do not go to shows, I spend my money on running and running apparel. I also try to support as many races presented by clubs as I can, and especially clubs that in my opinion are struggling financially, because they need our support,” he says. And during races, you’ll find him at the back of the pack, because he says he loves the chats, jokes and laughs that you find there, as well as the camaraderie and determination to finish. “For me, those are the true heroes of running.”

At the same time, Moegsien is a man who believes in speaking his mind, and this has meant that he doesn’t shy away from debating things on social media. He has been notably outspoken about the ballot system for entries in a major Cape race as well as the way the #runclean campaign has been implemented by some race organisers. He doesn’t have a problem with these things, per se, but in his opinion both need to be tweaked to the benefit of all runners.

He is a man who sticks to his guns and has no regrets about anything he has said or done in the running public eye. He talks about things that are close to his heart and though he will agree to disagree about the issues, he will not stand down on anything that bothers him. Unsurprisingly, these critical views have made him unpopular with some people and they have, according to Moegsien, been giving him the cold shoulder, but he just laughs about that. “I will never just sit silently by and keep my thoughts to myself if I feel that runners are getting a raw deal. It is about fairness, because I don’t like unfairness. What is good for the goose is good for the gander. Maybe I should have gone into politics, but that has just never been an attraction to me.”

POSITIVE VIBES
Of course, it is not all doom and gloom in Moegsien’s world, and he feels that the growth of the running community has been the biggest plus over the years that he has been a part of it. “I remember when I was starting out and there were just a few runners at local events. Now you have hundreds upon hundreds, and some of the bigger events pull thousands of runners to the starting line. This is a very good thing, but the problem is that race entries have also increased to very expensive levels. This has to be addressed by the powers that be, or else there could be a sharp decline in running numbers again.”

Still, he recommends the running lifestyle to all he meets, telling them not only about the health benefits and improved quality of life, but also about the social aspect of running, that you meet new friends and interact with people from all walks of life. “In my opinion, a running life is a win-win,” he says to conclude the interview, just in time to head off to go run (and photograph) the afternoon cross-country event.