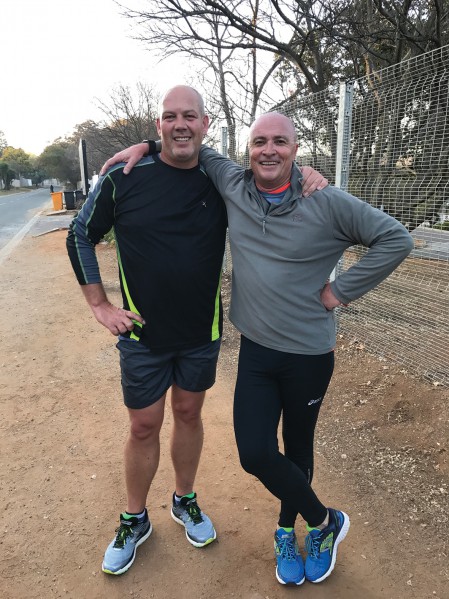 From the first time I met Troy Murray and Werner Nel, they were inseparable. I remember when they arrived in front of me after doing their initial 1km time trial with Coach Jonathan, looking ready to dominate the Modern Athlete #9to5Challenge. Both had many questions about what they were about to get themselves into, but I got the impression that these two were going to be committed, and boy did they prove me right. – BY JEANNIE JORDAAN, MODERN ATHLETE 9TO5 COACH

It all started when the two business partners as well as close friends, attended a conference at the Wanderers Club and saw the #9to5Challenge poster. Troy had lost most of his fitness and also wanted to get Werner on the challenge, because he is a rather large unit and hadn’t really done anything resembling a fitness programme for years. “At that stage I was unfit and overweight, and Troy and I kept talking about doing something to change it,” recalls Werner.

The plan was simply to start. Once that had happened – arguably the biggest hurdle of all – they simply had to follow the programme with the intention of being able to run 5km by the end of nine weeks. As Troy says, “My view is that everyone should be able to run 5km, and I was embarrassed that I could not. What if I actually needed to?”

For Werner, the ease of hitting the snooze button was a daily routine, but by joining the programme and committing to running twice a week with the group, he learnt that running is a great stress-reliever. “Or maybe I’m just too tired to stress about anything after a good run,” he laughs. Troy had a similar problem: “It’s easy to find an excuse not to do something, but when you’ve got other people you’re committed to, you find a way of getting up at 5am. I just didn’t have the self-discipline to do it on my own. Running has given me a nice base fitness level that allows me to comfortably cross over and enjoy other pursuits too, whether they be cycling, hiking or swimming. Also, you can take it anywhere.”

Upward Trajectory
These two are so full of life and had us all in stitches during most training sessions, but they have also proven a lot to me and themselves on this journey, even though they both say they nearly died the first time they ran the Westcliffe stairs. Troy laughs at the memory of utter pain and suffering when reaching the top of the stairs that first time, and then being told they still had another four loops to go. “I love those stairs now. And I also believe the early morning sessions when you are still suffering from the party the night before, are the best cure for hangovers!”

But more than that Troy elaborates on what else the two gained over the past months of training. “I actually learnt how to run and now know a bit about the science of running. I didn’t realise beforehand that just running round and round the block for 5km is just not a good way to get to run 5km. I’m more aware of my body and have a keen sense of distance now. And I even understand what “heart rate” means. I’m less tired overall and even recently encountered the feeling that I ‘need’ to run if I’ve missed more than two to three days… a sort of panic kicks in.”

Similarly, Werner puffs out his rather larger chest – albeit a little smaller than eight weeks previously, as he lost 8kg over that time – and admits that he is very proud of the more than two minutes he cut off his initial 1km time trial. “I really enjoyed that feeling of achievement!” he says.

No Stopping Them Now
Having both received prizes for “Best Overall Achievement” and “Most Improved Runner” on the programme, Troy and Werner admit that they have only just started on their fitness quest. Werner recalls that “My first goal was just to finish the nine weeks, but now keeping fit is my goal. After putting in the hard yards to get here, I don’t want to go back to the start. Also, to do a parkrun in under 30 minutes would be nice.”

If you also want to go from zero to hero in just nine weeks, like Troy and Werner, then sign up today for the Modern Athlete 9to5 Challenge. Go to www.modernathlete.co.za/page/9-to-5-challenge or e-mail jeannie@run925.co.za for more info.