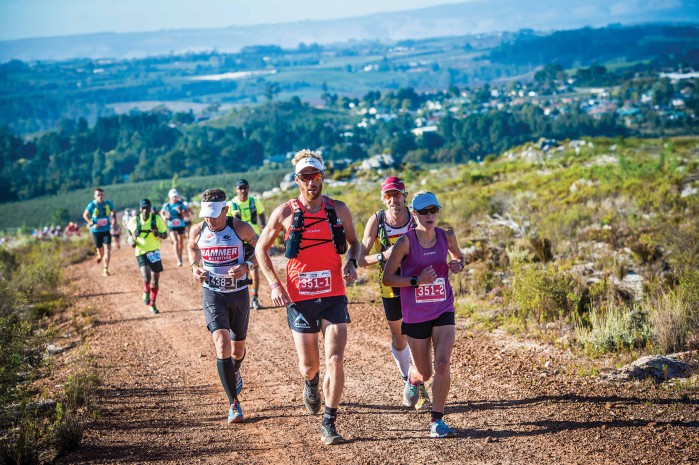 When you’re 34 years old, in peak shape and competing on the world stage as one of South Africa’s leading trail runners, the last thing you’d expect is to suffer a stroke. After all, normally it is much older people that suffer strokes. But as AJ Calitz found out in April, even a young, fit athlete is not immune. – BY SEAN FALCONER

This wasn’t supposed to happen to AJ Calitz… In February, the current SA Ultra Distance Trail Champion won the three-day Tankwa Trail event, and then in March he teamed up with fellow K-Way athlete Nicolette Griffioen to win the mixed category of the three-day Cell C AfricanX Trailrun, to go with three wins in the men’s category in previous years. Just after that he set the fastest lap time in the Platteklip Charity Challenge on Table Mountain, even though he was taking it relatively easy in the event where he set a World Record of 15 ascents totalling 10,250m in 12 hours a few years ago. Then on 8 April he lined up for the Impi Challenge obstacle race near Stellenbosch, determined to use his running fitness to full advantage on the demanding course that snakes around various wine farms.

He went on to cross the finish line first, thinking he had won the race, but it turned out that a navigational error had seen him miss one of the obstacles, and thus he was not given the win. Disappointed but still having enjoyed the challenge, AJ headed home to be with his family for his daughter Emilie’s birthday party that afternoon. “I felt tired after the Impi, which was not unusual, but that afternoon I climbed on the trampoline to jump with my daughter, and suddenly I blacked out,” says AJ. “When I came to, it felt like my one eye had gone sideways, but my wife said both my eyes had actually split apart. I told Paulette I was not feeling well and went to lie down, but when I woke up I was still not feeling right. She was getting worried and phoned friends for advice, and they all said go to hospital. I was booked into the neurology section, and they told Paulette I had just suffered a full stroke!”

The doctors came to the conclusion that during the Impi, when AJ was carrying various heavy objects on his shoulders, the strain on his neck caused a tear in an artery that feeds into the thalamus in the centre of the brain. The thalamus controls sensory input and motor skills, as well as the regulation of consciousness and sleep. When you tear a vein or artery, a blood clot forms, and jumping on the trampoline that afternoon dislodged the clot, which then got stuck in AJ’s thalamus, causing the stroke. “It turns out that carrying a brick on your head, a 50kg bag of sand, and then jumping on a trampoline is not good for you… who would have thought?”

BOUNCING BACK QUICKLY
AJ spent three days in ICU, and at first he was not allowed to walk much, as he still had crossed eyes. “My perception was my eyes were fine, but they were actually pointing outwards, and that affected my coordination badly. When I did start walking again, I had to do it with a pram for the first week, and soon I was going crazy. I was so fit, and building up to my overseas racing season, and as I told my coach and physio, Christoff Smit, I felt like a penned down race horse! He told me to try running slowly, making sure my heart rate did not exceed 100 or 110, but just putting on my shoes and standing up put me over the limit at first!” The neurologist also grudgingly gave AJ the all-clear to start running again slowly, but warned that the long-term loss of co-ordination, peripheral vision and short-term memory will stay with him, because 1.5cm of his thalamus is now dead.

Another reason AJ was raring to get back into action was that he had qualified for the international finals in Germany of the global Fisherman’s Friend Strongman Run obstacle race series. In September 2016 he had won the inaugural South African leg in Paarl, organised by well-known television personality Ferdinand Rabie, but the finals in Nuremburg were scheduled just six weeks after his stroke. “I felt OK after a few good training sessions, and the trip was already paid for, so even though the neurologist said he was not keen, he said OK, go and take part, but don’t race. They had already said it was safe for me to fly, as they had done three scans with iodine to check if the tear in the artery had healed, but it was mostly due to the amazing support of my wife, and sponsors really going out of their way to make sure I was OK, that I was able to go.”

AJ lined up intending to just enjoy the experience at the world’s biggest obstacle race event, but when he found himself in the lead group and with a relatively low heart rate, he decided to stick with the leaders and see what would happen on the two-lap course. “I didn’t actually know how to do some of the obstacles, so I stuck with the leaders for the first lap, but early in the second lap we hit a swimming obstacle, and being an ex-triathlete, I just jumped in and took the lead.”

“There were 15,000 entrants, so it was hard getting through the backmarkers on that second lap, and at one stage I was running with another leader, but somewhere I lost him in the crowd and when I crossed the finish line I did not know if I had won. In fact, the organisers and media were just as stumped – they weren’t even ready for me to come in, but my timing chip proved I had done the whole route, so I was asked to run the last 200m again for the cameras, and then I was swamped by the media. I’ve never had so much media attention!”

BUT WAIT, THERE’S MORE…
Incredibly, just three weeks later, AJ took on the incredibly tough Fish River Canyon Ultra Trail Run, where he set the course record in 2016, clocking 6:39:52 for the 100km route. “I’ve always loved this race and the amazing vibe that goes with it, and since it has become one of my regular races, I know the route well – and it’s tough as nails! The previous two years I ran the race chasing the Fastest Known Time (FKT), but this year I just relaxed and enjoyed the scenery, and I still won by nearly two hours, but I think that’s because I know the course so well.”

Now, about four months after the stroke, AJ says he is still suffering side-effects, but he’s not letting that stop him doing the things that he loves. “I can see it in the way my body reacts to sensory inputs, like seeing a rock when running. I used to just run over it, but now I have to think harder about it, and often end up hitting the rock instead. It used to be second nature, now it is something I have to relearn, but my running days are not over and I’m slowly getting back to full strength. It’s just another obstacle to overcome, and the neurologist assures me I will get back to normal, so I’m not wallowing in sorrow.”

Looking ahead, AJ says he hasn’t mapped out the second half of the year yet, and is just focusing on spending time with Paulette and Emilie. “I tend not to plan too far ahead, and have always done it that way. If something interesting comes my way, I will go for it… but I won’t be doing any more obstacle races where you have to carry heavy objects. I love the Impi and other events like that, and I didn’t do any obstacles that day that I hadn’t done before, but I’m made for running across mountains, not for picking up heavy bags of sand.”

SECOND CHANCE
Unsurprisingly, AJ’s thoughts these days include his own mortality and limitations, but he says he tries to put this out of mind, especially when he is running. “To be honest, I don’t like talking about the stroke, because it normally happens to much older people and was not supposed to happen to me. After all, to be a top runner and conquer mountains, you need to convince yourself that you’re invincible… The doctors say I was lucky that I was young and fit, and that the stroke was exercise-induced, instead of being caused by something like cholesterol.”

“Sometimes I lie in bed wondering why this happened to me, but I’m not dwelling on that. You don’t often get a second chance in life, so when God gives it to you, you have to grab it. Luckily I am surrounded by family, friends and sponsors that care, and they’ve all said I must take as much time as I need. That makes it easier, and I see every day as a blessing. It’s a thrill now just to put my running shoes on and head off to the mountains, and I believe that if you don’t fall at least once in every run, you’re not trying hard enough. I’m obviously trying very hard these days!”