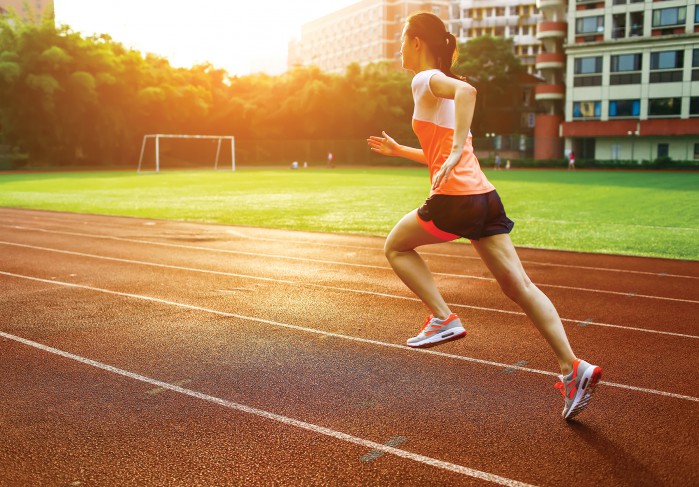 With spring just around the corner, now is the time to give speed a chance in order to be ready to race when the weather warms up. – BY DERICK MARCISZ

I honestly believe that most runners would love to run fast, but many runners say they don’t do speed work in training because they are not fast enough to race competitively and therefore don’t need speed training. This is actually wrong, as speed work will definitely improve your running, no matter your age, gender or ability.

The first rule of running fast is simple: Run short. In other words, focus on intensity instead of distance. Short means shorter distance and fewer repetitions. There is only one way to get to run faster, and that is to teach your legs what it feels like to run faster. To do that you have to do training workouts that accomplish exactly that: Get your legs used to running fast. And make it fun! So here are some training sessions to learn the technique of running fast.

1. STRIDING THE STRAIGHTS
This session is usually done around an athletic track, but it can also be done on a sports field. After an easy warm-up of 3km to 5km with some faster striding, do the following:
• Run the straight of the track fast – close to full speed, not quite an outright sprint, but at a pace that you could only maintain for a short while – and then jog the bend slowly to recover. Cover anything from 8 to 12 laps of the track this way (about 2.5 to 3.5km).

The good part about this training is that the rest period is not structured in terms of the recovery period – you can jog or even walk the bends until you feel fully recovered to run another 100m fast. As you get fitter, this recovery jog will get faster, but always focus on the fast 100m runs.

2. FARTLEK
This is running in its purest form – no kay markers, GPS or heart rate monitors, just fast running at its best! Fartlek was invented in 1937 by Swedish coach Gosta Holmer and the name roughly translates as ‘speed play.’ True fartlek is about mixing up faster-than-race pace efforts with easier recovery running, and it is an effective and satisfying training session that should always be fun!
• Run with a partner and each of you will be responsible for 20 minutes during which you decide how fast and how far you run. Try to do this in a large park area, but you can also do it on the road.
• Start with an easy-paced warm-up of around 4km, with a few faster surges.
• The first ‘leader’ will then say, “Let’s sprint to that tree,” or “Let’s run hard for two minutes.” The same applies to the rest periods. After 20 minutes you swap around.
• After finishing 40 minutes of running freely like this, you will be left feeling strong and invigorated, and can jog another 3km as a cool-down.

About the Author
Derick is a Joburg-based running and triathlon coach, with multiple ultra-marathon and Ironman finishes to go with his 20-plus years of experience in coaching.