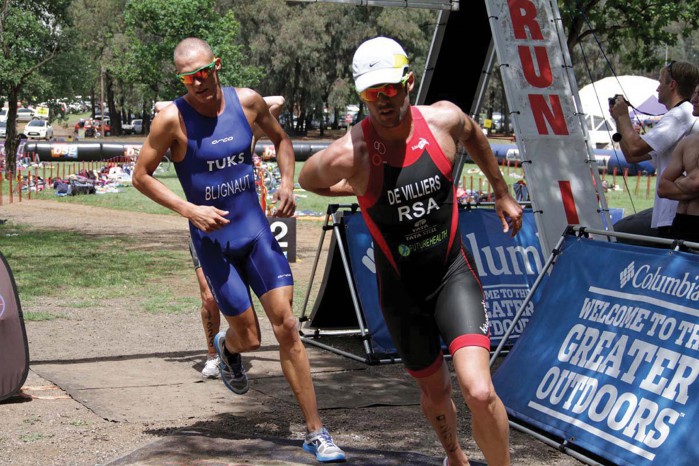 In the early 2000s, Hendrik De Villiers was one of SA’s leading sprint and Olympic distance triathletes, but his pro career was cut short by financial constraints. Having gone into financial planning and insurance, he is now trying to give back to the athletes of our country by offering them an opportunity to generate income to fund their careers. – BY SEAN FALCONER

He may have run his first Comrades Marathon this year, clocking 9:50:49, but Hendrik’s first love will always be multisport events The multisport bug bit him early, when he started doing biathlons at the age of 10. He says he could run and swim well, so did quite well, and that naturally saw him progress into triathlons in high school, when he and friends participated in the relay event at the 5FM Energade Series. “I can still remember my first tri race as a 16-year-old at Maselspoort in Bloemfontein. We won the relay, and I still have the Energade bag that was part of our prize hamper.”

In 2001 he set an under-19 SA Record in biathlon, which still stands, and was crowned World Biathle Champion three times from 2001 to 2003, before moving up to triathlon. Although he did own a bicycle in high school, he had only used it for commuting to school and practice, so giving triathlon a full go had to wait till after school. “I only got my first racing bike after school. I used all the money I had saved my whole life, and I told myself I would not buy another bike unless I earned enough through the sport to afford it.”

“I was studying full-time at Potch at the time, for my B.Com. Accounting degree, which is a really tough course, and I had to save up as well to afford weekend racing trips around the country. Fortunately, success came almost immediately. My running and swimming were strong, and even though my cycling still had to catch up, it was easy to ‘hide’ on the bike because drafting was legal. On the other hand, I was racing the three Storm brothers, who often worked together against me, but I did well and was approached by the Nestle team to race for them.”

ELITE PERFORMER
With sponsorship support, Hendrik became a podium regular throughout SA as well as in several international races and championships, often using his devastating run speed to clinch wins. He won the 5FM Energade series four years in a row from 2003 to 2006, won five SA Triathlon Champs titles, and also five African Triathlon Champs titles. Straight after completing his studies, he raced in Germany for a Bundesliga team, and contested his first World Cup season in 2004, posting five finishes frustratingly just one position outside the prize money!

In 2006 he won the London Triathlon, which he describes as a career highlight, and then finished 10th at the 2006 Commonwealth Games in Melbourne, Australia. The following year he won the Richards Bay World Cup event. “I was the first South African ever to win a World Cup event, which was the top level equivalent to the World Triathlon Series of today. That was probably the most special memory of my career,” says Hendrik. In 2008 he finished fourth in the World Champs in Vancouver Canada, and that saw him selected for the 2008 Olympics in Beijing, China, but he unfortunately had to withdraw shortly before the Games due to illness – and that proved to be the closest he would get to the Games…

CALLING IT A DAY
While he continued posting numerous top 10 World Cup finishes as well as two end-of-year Top 5 World Rankings, Hendrik’s career came to an unplanned and abrupt end in March 2012, when he was 30. “I originally intended to retire after hopefully making it to the 2012 London Olympics, but I lost my sponsor in February that year and the national federation pulled my funding in April after I suffered a tummy bug at the African Champs in Mauritius and didn’t earn any qualifying points that day to help get me into London. At that time I only had three events left where I could earn more points, and I was only ranked 57th in the world – you needed to be in the top 50 to make the Olympics. The one race was in the USA, another was in Spain, and I think the third was in Canada, so it would have been very expensive to travel to all three events.”

“I was already in debt, had two beautiful children depending on me, and my divorce had just gone through, so I decided to retire, because it was just not financially possible for me to continue. It was a very hard decision, because I think I could have managed three Olympics if things had gone right for me and I had the financial backing to go all the way. These days I just watch the sport, and when I see what the guys earn thanks to the Ironman events and lucrative sponsorships, I really think I was around just a bit too early in the sport.”

FINANCIAL PLANNING
Having hung up his racing shoes, Hendrik went into the financial planning and insurance industry, and his experience in the final years of his triathlon career has very much influenced his decision to develop the Champsure platform specially targeted at athletes. “I learnt from my own experience that there are a number of financial gaps that athletes need to fill, including having insufficient funding to start their careers and no benefits such as medical aid or provident fund while pursuing their careers, losing out on prize money due to injuries, losing a sponsorship or federation funding, and retiring after a 10-year sporting career with little or no corporate work experience.”

“So, we are helping them to generate income for their sporting careers, and for after they retire, via the insurance industry. In essence, it’s a referral contract, but we also create a profile for them on our website, to promote them. The athletes get friends, family or even fans to sign up with us as clients, in order to support the athlete thanks to a portion of all payments being allocated to the athlete that brought their business in.”

Hendrik says Champsure is primarily focused on individual Olympic sports, such as athletics, swimming or triathlon. “Apart from individuals, we also sign up schools and sport clubs, and the public can also nominate them via our website. Many individual athletes and the minor sports tend to get little or no exposure and media coverage, so no funding either, and Champsure is therefore a great model for athletes, schools or clubs to make extra income… but this is a long-term deal, and we tell guys not to expect a get-rich-quick solution. This is about creating a win-win-win scenario for the client, athlete and the company, giving back and enabling athletes to live their dreams.”