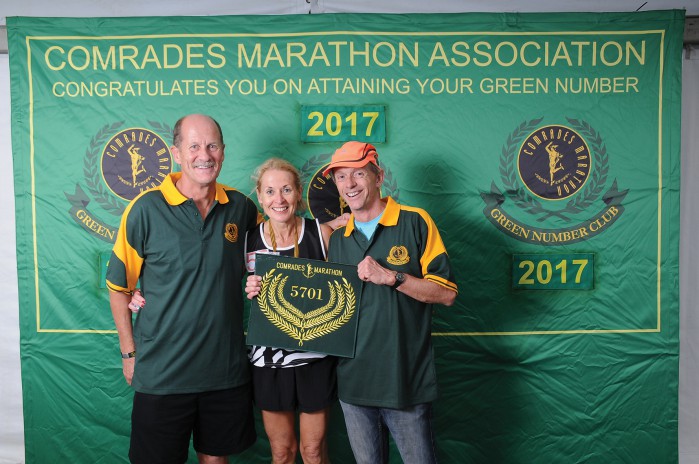 Having been unable to complete the 2016 Comrades when aiming for her 30th (and final) medal, 1991 women’s winner Tilda Tearle returned in 2017 for another go at earning her Triple Green before hanging up her Comrades shoes for good. In her typically honest and irreverent way, here is her story.

In 2016 I failed to finish my 30th Comrades as I had been injured and couldn’t train properly. However, I “kept the faith” that I would do it in 2017, because I had made a promise to myself that after I completed 30, I would take Comrades ‘pension’… but then 2017 did not start well. I tore a calf muscle which reduced me to a swimmer and walker for six weeks. Life is not always a bed of roses!

After six weeks I was able to run again and decided to try compression socks. These helped, as I felt I was being “kept together,” but I had not qualified for Comrades during 2016 and had to get my act together. So I entered the Pietermaritzburg 42km on just a few weeks’ training and one 21km run. Phew, I qualified in 4:56 – hurdle number one had been overcome and my calf remained intact.

All in all my training went well. I decided that this year I would not run so many races, but would do a lot of back-to-back training runs, and I also decided to stay off the route and rather use the Chatsworth 52km as my long run. I stayed away from trail runs, and was extra careful while running in the dark, so no further injuries, and as Comrades got closer, I never lost faith in myself. I know I am now quite slow, but I perform like an old truck and can just keep going once I’m warmed up!

Friendly Support
Meanwhile, Stephan Bruwer (aka Fanie), who I have run with for many years, was not as fit as he should have been and was thinking about withdrawing from Comrades. I suggested he run with me and forced him into a few longer training runs. On Comrades morning we met outside the Hilton, and I gave his daughter some GU’s, Rennies and sparkling water, as she would be seeing us at various spots. Fanie and I then walked up to the start and fought our way into a spot amongst the E batch runners.

It was the normal pandemonium at the start… runners jumping the fence, some unmentionable smells, a bit of pushing and shoving. Eventually the Comrades cock crowed, the gun went, and it took us four minutes to cross the start line. We got going with a few leaps over discarded tops and bottles, and potholes in the road. During the early stages of our run we saw the lady being pushed in the adult pram, the lady doing her thing in a racing wheelchair, the “backwards man,” the blind man, and the barefoot man from Celtic Harriers. When we got to the bottom of Field’s Hill we met Fanie’s family and I collected a GU. This was unfortunately the last time I would see them.

Up Field’s Hill I felt like James Brown and started pulling ahead of Fanie and Robbie Richey (who by now had hunted me down, because he has used me as a pacer since 2013!). We still went through Kloof together, but by the start of Hillcrest I had dropped the boys. I only found out later that Fanie encountered problems at Botha’s and had to withdraw… His pulse rate shot up so high he thought he was having a heart attack!

My plan had been to get through halfway around 5:20, so I could walk a lot in the second half. I was a bit off, but still had lots of time for walking. I encountered lots of runners who wanted to chat and wish me well, and I saw everyone I had planned to see along the route, so my day was turning out happy. Meanwhile, Robbie had caught up again and made sure he stayed near me. At one stage I even held his hand to keep him going.

Digging Deep
During Comrades you have to learn not to panic. I had now lost my GU’s, as Fanie’s daughter was nowhere to be seen, but I knew that at Camperdown I had a GU at the Savages table. That thought kept me going, but it was good to see that table! Camperdown is normally the point where you have to start digging deep, and the race is often won or lost in this area. I was still fine, and lucky for me I was carrying my own Rennies, which I have learnt to take for nausea.

At about three in the afternoon fellow Durban runner Gina Hinchcliffe of Stella was suddenly running next to me. Her husband was struggling and told her to push on, and so we stuck together for the rest of the race. She gave me a helping hand down the hills, and we remained in a positive frame of mind as we walked the whole of small Pollies and then the whole of big Pollies. At the top of Pollies, I said to myself, “Goodbye Pollie, I have kissed your arse goodbye… finally!” We were then confronted with the nasty new finish – 7.2km of rollercoaster, but we kept moving. A friend riding a bike reported that Gina’s hubby had been spotted at Pollies. We hoped he would pull finger and finish in time. The same guy then told me it looked like I needed a good meal.

Gina informed me that she had a friend about 2km from the finish waiting with wine. “Yay,” I said, hoping she would share. When we got to the friend, Gina had her sip of white wine and I had 2 big glugs. Tasted so good! Revived and with a grin, off we went. Meanwhile, Body Guard Clive (my husband) and I had arranged that if he could get close enough, he would hand me a banner which I could run in with. I spotted him, collected my banner and Gina and I ran in carrying it for an 11:43:50 finish. My ‘triplets’ had finally been born, and I was such a happy girl. To add to the pleasure, Bruce Fordyce and Alan Robb handed me my Triple Green.

All done… kind of
After the race we went to see my mother, who lives in Pietermaritzburg. She had bought me a teddy bear wearing a hat, and she said this was because she took her hat off to me. She then told me to put my hand on her Bible and swear that I wouldn’t do Comrades again! I said 30 Comrades is really enough for me… but if I am in one piece, I would like to run in 2020 (as a 60-year-old) and in 2025 when it is the 100th running of Comrades. If I am still able to qualify in 2025, I will be at the start. After 32 Comrades’ starts and 30 finishes all I can say is that Comrades is not for sissies. It is ******* hard, and don’t let anyone tell you otherwise, but is it absolutely worth it!