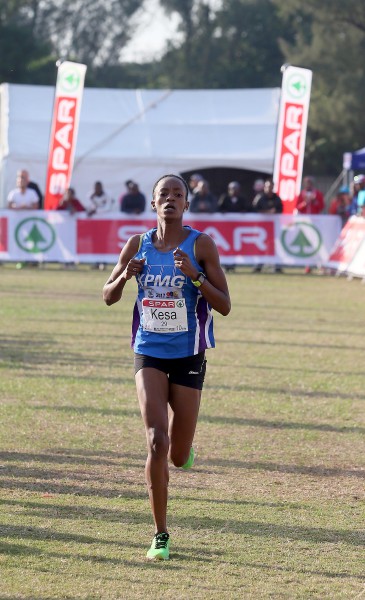 Molotsane was also second in Cape Town, and she won the Port Elizabeth race. She earned bonus points in both races, and has a total of 78 points. The current Grand Prix title holder, Irvette van Zyl, was third in Cape Town and second in Port Elizabeth, also earning bonus points in each. However, she was forced to drop out of the Durban race because of an injury. She has 57 points.

The 2015 Grand Prix winner, Lebogang Phalula, who was fourth in Cape Town, fifth in Port Elizabeth and third in Durban, is closing in on Van Zyl with 51 points.

Nolene Conrad and Mapaseka Makhanya, who won the Grand Prix in 2013, are in joint fourth position with 44 points.

The winner of Sunday’s race, British athlete Tish Jones, is in 12th position, with 30 points, after finishing within the target time. Jones did not compete in the first two races, but says she intends to run at least two more, which means she could challenge Moletsane before the final race in Johannesburg in October.

One of the outstanding achievers is Judy Bird, running in the 50-59 years category. She has been the first Master home in all three races, earning time bonus points in each, for a category total of 30 points.

The last three races will be run in Pretoria on August 5, Pietermaritzburg on August 20 and Johannesburg on October 8.