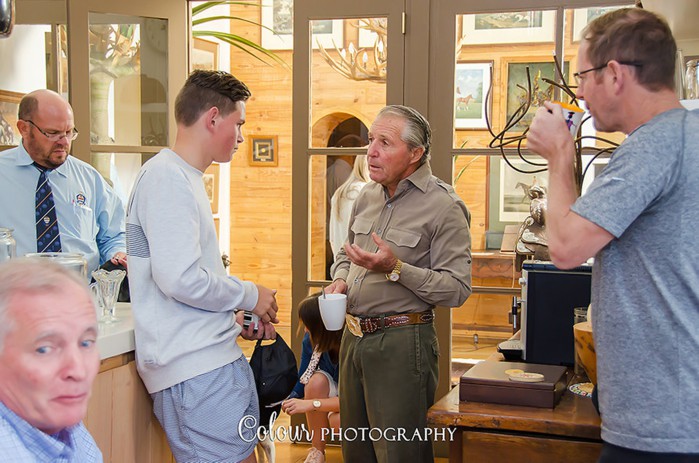 World-renowned South African golfer Gary Player is a nine-time Major winner, but he is also a 1000-time major winner in the winning-people-over category. He demonstrated that again recently when the six top golfers from Grey College were invited to his Rietfontein farm, outside Colesberg in the Western Cape.

The 81-year-old golfing legend invited the young men to spend a day with him after he was a guest speaker at the Bloemfontein-based school last year. Gary has pledged to speak to millions of children about diabetes, physical exercise, a healthy mind and good nutrition, and when he challenged one of the fittest boys in the school to do push-ups with him on stage, he out-worked the lad… in a three piece suit, nogal! That’ s when the light went on for many of them. “Work hard and be strong!” he told the boys. “And you guys thought I’ d come out here with a Zimmer frame, eh?” Gary chuckled.

But, you may well be asking yourself, what is a story about a golf legend doing in Modern Athlete magazine? Well, Gary is the epitome of a modern athlete, even though he is now in his ninth decade.

LEADING THE WAY
From his earliest days, Gary realised that he needed to cross-train, and to do a lot of it. Small of stature but big of heart, he pushed weights, ran and ate in the most nutritious way possible… all things that most modern athletes take for granted, elements that you have to weave into your daily training routine to become better, faster, stronger. But here’ s the thing, Gary did this in the early 1950’ s, and as a result, most people in (and out) of golf thought he was mad.

Yet, 60 years on and one of South Africa’ s all-time greatest sportsmen is still going strong, as he demonstrated to the young men when he welcomed them at his front door and made each one coffee individually. He then ran them all up “his mountain” to not only show them the awesome view, but also to make them understand that you have to overcome hardship and adversity to get to the top.

“I was seven when I had to travel right across town in Johannesburg to go to school. My mother had just passed away and I was all alone. When I got home at night I had to cook for myself, as my dad was a miner and was workinghundreds of metres underground,” Gary told them. “More than 70 years on, I am glad for that. It made me who and what I am today. Never let adversity break you, let it make you stronger.”

HEALTHY START
In his kitchen in the beautiful farmhouse in the heartland of the Karoo, Gary personally made the group a berry smoothy and then a green juice that he drinks every day, which includes water cress that he grows himself. His brand new Nutribullet had already clocked some interesting ‘ kilometres’ and certainly works overtime in the Player kitchen.

After this hearty breakfast, which was washed down with a healthy muffin and fresh juice, the lads were bundled into the game-viewing vehicle and taken to the other side of the hill, where they all hit golf shots for the maestro and he gave each of them an impromptu golfing lesson. His supple powerful frame still takes the club back and follows through with that swoosh that only great golfers create, and the ball leaves the club with a distinct click that just a few on the planet achieve.

Imagine that, 16 years old and you get a lesson from one of the world’ s best, while all the time he is instilling his incredible work ethic into your psyche! Overall, though, the lesson here is that you are never too old to be a modern athlete… and Gary Player is the epitome of that!