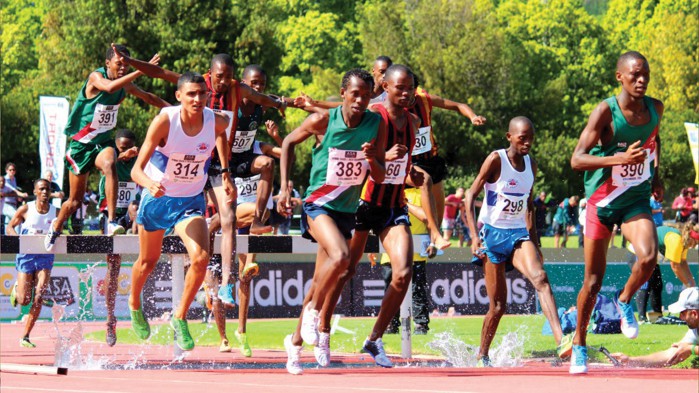 Having made the finals in the 3000m steeple-chase at the African Track and Field Championships last year but then missing the Rio Olympic Games qualifying standard by just one second, three-time SA steeple-chase champion and also former SA 1500m and Cross-Country champ Rantso Mokopane has dug still deeper this year in his quest for international success on the track. – By Reggie Hufkie

It is not the amount of medals, but rather how he earned them that caught the attention: On day one of the USSA Champs Rantso won the men’s 1500m and just 30 minutes later added a second gold by winning the 3000m steeple-chase. Then the following day he finished second in the 5000m, only just narrowly missing the World Student Games qualifying mark for that event.

The three medals point to the fact that all the hard work in training is paying off as Rantso chases his goals for 2017 and beyond. “I want to stay as healthy as I can so that I can fight for a position in London come August. The dream is to successfully contest the men’s 3000m steeple-chase in Taipei, China at the World Student Games later this year, and qualify for the World Champs in London. After that, I am working towards the 2018 Commonwealth Games final, and as for the 2020 Tokyo Olympics, I want to compete in two events and come back with a medal in one!”

With that all said, in his typically humble way Rantso adds that medals are not the main focus for him: “Obviously you would think gold medals, and travelling to fancy places, are the highlights for me… but no, my highlights are those moments where I can inspire an African child to be better. I like to help where I am most needed, where I can raise kids’ spirits and perceptions, so that they can also become successful like me, or hopefully even better.”

Born in Saaiplaas, Virginia, a small town in the heart of the Free State, Rantso was always running. Despite contracting TB and pneumonia at the age of four, which meant he was not allowed to engage in any physical activities, as it would place stress on his cardiovascular system, the youngster just would not stop running. “If it was not running to the Spaza shop for my parents, it was running to school,” he says. Then, when he moved up to Hentie Cilliers High School in grade eight, his life changed forever. It was here that athletics coach and teacher Mrs van Graan really ignited Rantso’s passion to run.

“I was always a runner at heart, but this time it wasn’t just merely running, but running with purpose and having a purpose-driven life,” he says. “I liked my high school, because the teachers were like mothers and fathers who pushed me hard in class to pass, and who also supported me on the oval track to raise the name of the school high, and this helped me balance everything, from school to athletics to life’s issues.”

After school Rantso moved to Potchefstroom to study at the North West University, and he has gone on to earn a degree in health science as well as a post-graduate degree in business – and he has achieved that in the ‘normal time,’ in spite of spending on average three months of each year abroad for athletics in the last few years. Ironically, he describes himself as being “not so academic,” but his can-do attitude has ensured academic success to go with his athletic success.

“I do my academics in silence and run aloud, but if these qualifications could speak, they would tell you of the many nights where my body was tired from doing lactic sessions, gym and runs, but I still worked on academics. Or the times when I was not present in class, but managed to submit and be graded like a normal student… so these qualifications mean a lot to me,” says Rantso.

And he is in good company in Potchefstroom, sharing the same gymnasium facilities at NWU with the likes of Olympians Caster Semenya and Elroy Gelant, and he says being part of this group definitely helps spur him on. “I take my motivation from people who have done or accomplished something – it might be spiritually, in sport, or academically. I believe the human species is complex and we need different stimulation.”