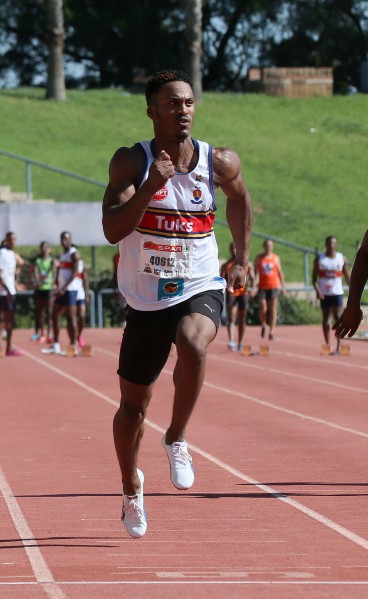 The men’s 100 metres final later today at the South African Track and Field Championships in Potchefstroom could just be the dream race everybody has been speculating about, with potentially all of SA’s sub-10-second 100-metre athletes set to do battle in an epic final, which means we could see three or more athletes dipping under 10 seconds for the first time in the same local race.

If nothing unforeseen happens, it will be the first time this season that all four of SA’s current sub-10 athletes – Akani Simbine (9.89), Thando Roto (9.95), Henricho Bruintjies (9.97) and Wayde van Niekerk (9.98) – will compete at the same meet in the 100 metres. There are also rumours that Simon Magakwe (9.98), the first South African to dip under 10 seconds, may be racing. He was banned for two years after he allegedly refused a dope test and only started racing again recently. The athletes will contents qualifying heats to make it to the final at 6:40pm this evening.

Simbine, who recently clocked his 10th sub-10 race at the Gauteng North Champs in Pretoria, is seen as the favourite. He has said he is now confident of dipping under 10 seconds every time he races, and has been true to his word so far this season. At the provincial championships he clocked two sub-10 times on the same day, running 9.98 and 9.92.

Although a man of few words, Simbine says he is feeling good and expects to run a fast time in Potch. Asked how he felt about racing all of South Africa’s top sprinters, he said: “My training has gone really well, so I am looking forward to race. I cannot speak for the other athletes, I can only speak for myself, but when I say I am ready to run a fast time, I mean it. Hopefully the weather will play along, it won’t be too cold and there will be a slight wind from behind when we race.”

Meanwhile, Tuks/HPC head coach Hennie Kriel predicts that Roto has the ability to cause a surprise. In the 100m final at the provincial championships in Pretoria, he led for the first 70 metres before Simbine passed him. “Fast a very fast time,” was Kriel’s answer when asked what can be expected from Roto in tomorrow’s final.

Roto himself says he is up for the SA Champs shpwdown. “In Pretoria, at first I was zoned out and just racing. Then suddenly I realised that I was in the lead. It was like it cannot be that I am leading Akani. The mistake I made was to start to doubt in my own abilities,” he says.

A third contender, Henricho Bruintjies, is the defending South African 100m champion. However, up to now he has not come close to the form that saw him running 9.97 in 2015 in Switzerland, but his coach, Werner Prinsloo, is not worried. “Henricho is definitely going to run a sub-10 race. I just don’t know when it is going to be. If he comes close to running 10 seconds tomorrow I will be happy. Running his second sub-10 is a psychological barrier Henricho has to overcome – once he has done so, I am confident it will become a regular occurrence.”

The 100 metres is not really Olympic 400m Champ Van Niekerk’s speciality, so it will be interesting to see what he does in Potch, but given his 9.98 of last year, it will be wrong to discount him in the final.

Unfortunately Gift Leotlela, who set a new South African junior record by running 10.12 earlier this season, won’t compete in the 100m at the national championships, as he has slight back injury and has decided just race the 200m event.