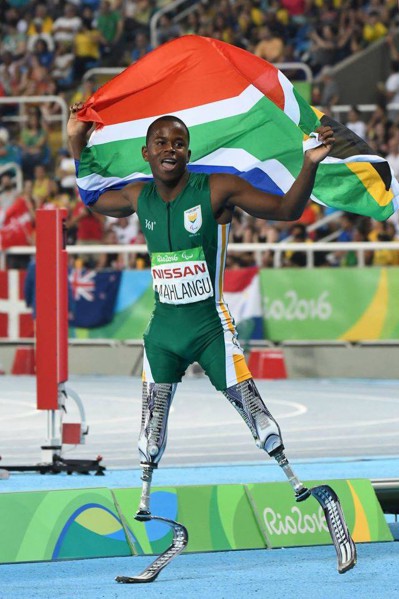 Sprinting in South African athletics has never looked better after an incredible 2016 season, and adding to the buzz are Clarence Munyai, Gift Leotlela and Ntando Mahlangu, a new crop of young sprinters coming to the fore in a big way. – BY KYLE DEELEY

This past year has been immensely exciting for SA sprinting, with Wayde van Niekerk winning an Olympic gold medal and setting a World Record in the 400m, while Akani Simbine and Henricho Bruintjies racked up the sub-10s in the 100m and Akani took the SA Record down to 9.89, but there was another highlight when two 18-year-old high school sprinters qualified for the 200m at the Rio Olympics. Last year Clarence Munyai and Gift Leotlela were both enrolled at the TuksSport High School in Pretoria, and they used their close, friendly rivalry to push each other to greater heights.

Youthful Success
In 2016 Clarence won the SA Senior and Junior 200m titles, and finished fourth in the 200m final at the IAAF Under-20 Championships in Bydgoszcz, Poland. His win at the senior SA Champs makes him the second-youngest ever national champion, and one of only three 18-year-olds to win an SA title. Ironically, up till a few years ago he didn’t even think he was that good a runner. “I used to run at school and the teachers kept telling me how good I was, and that I should focus on my running talent. I didn’t believe them at first, but I am not scared of hard work and I am hungry, and that is why I am where I am today,” he says.

Meanwhile, Gift claimed the SA Junior 100m title and the CAA Southern Region Under-20 Champs 200m title, and in Bydgoszcz he came through to win the silver medal in the 200m final, having also claimed the 100m silver medal at the 2015 Youth Commonwealth Games in Samoa with an SA Youth Record that was just 0.01 seconds slower than the winning time and new Youth World Record set by Japan’s Yoshihide Kiryu. He was understandably elated when he heard he was going to Rio. “Words cannot properly describe what I felt the moment I saw my name appear on the television screen, confirming that I would be going to Rio. I was so overwhelmed that I had to fight back my tears.”

In Rio, neither of the youngsters was able to progress beyond the first round heats, but at just 18, they have age on their side, and now have the bonus of experience on the highest stage of world athletics. “Although I didn’t do as well as I would have hoped in Rio, I still can’t believe it that I was actually there. I am living a dream that I hope to never wake up from,” says Clarence. Similarly, Gift looks back on Rio with fond memories: “My Olympic experience was great and although I failed to qualify from the first round alongside Clarence and Anaso Jobodwana, it was an amazing and life-changing opportunity.”

Paralympic Star
The third young sprinter to make the headlines was 14-year-old Para-athlete Ntando Mahlangu, who brought home a silver medal from the Rio Paralympics in the men’s 200m in the T42 class for double amputees above the knee. Born with Hemimelia, a condition that left his lower legs underformed, Ntando spent most of his younger years in a wheelchair. In 2012 his lower legs were both amputated at the knee, and later that year he was given his first set of blades.

“When I took my first step I actually vomited, and when the doctor asked me why, I simply told him I was just so happy. I learnt to walk very quickly — it only took me about a week — but I never ever thought that four year’s down the line I would be representing my country on the world’s biggest stage,” says Ntando. Within two years of getting his blades he was a national para-champion in the 100m, and the following year he set three African Records at the 2015 SA Champs, and set a Senior World Record in the 400m at the 2015 IWAS Junior World Games.