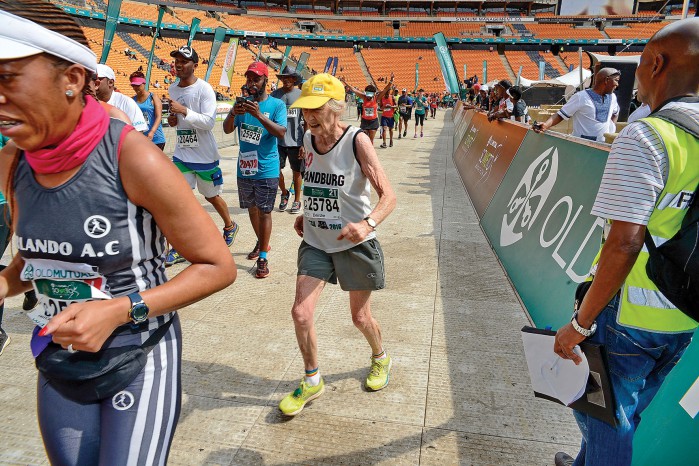 She may have only taken up running late in life, but Deidre Larkin has certainly made her mark on the SA running scene, setting several world records or bests, regularly finishing on the podium at races, and inspiring many a younger runner with her attitude – and at 85 she shows no sign of slowing down any time soon. – BY RACHEL PIENAAR & SEAN FALCONER

Deirdre Larkin remembers the first time she ever ventured out for a run in late 2009. It was early morning as the 78-year-old put on her brand new running shoes and hit the road, employing an interesting regime of run three steps, walk three steps, because that was all she could manage. She had been diagnosed with osteoporosis in 2001, and the doctors had put her on medication to combat the deterioration in strength of her bones, but the medication made her ill. “I was going to doctors to be cured of what other doctors gave me,” she says, adding that a dietician also advised her to cut all sugar, salt, white flour and caffeine from her diet, while a biokineticist designed a strengthening programme that included yoga, Pilates and fitness classes. “But then one day I saw my youngest son running and I thought, now that is something I should try! I was looking for an exercise to do because of my osteoporosis, so I decided to try running.”

After just over one month of training, Deirdre was ready for her first race, the Randburg Harriers Valentine’s 10km, and she finished it in one hour 25 minutes. The racing bug had bitten, and that year she went on to complete 36 races. The following year, having set her sights on collecting as many medals as she could, she completed 58 races! By 2012 she was winning the great grandmaster age category regularly, and in 2013 she was selected to run for Central Gauteng in the SA 10km Championships in Durban. There she clocked 54:17 to break the SA 10km Record for women over 70 years of age, and smashed the World Record for women over 80, taking two and a half minutes off the previous mark. She also won the great grandmaster category in the Spar Womens’ Challenge Grand Prix that year.

In 2015 she once again claimed the SA 10km title in her age category, and towards the end of that year she posted a 1:01:31 finishing time in the Kolonade 10km in Pretoria to set a new world single-age record for an 84-year-old woman, to go with the records she already holds for 81 and 82 years of age. Now 85, Deirdre is still a regular at the races in Gauteng, averaging 60 races a year and running an event most weekends, sometimes even two, mostly over 10km but with at least one half marathon included per month. Just recently she won the 80+ age category at the Old Mutual Soweto Half Marathon, and within two weeks she was back in action at the notoriously tough Tom Jenkins race in Pretoria. There’s no holding this grand dame of road running back!

Musical Talent
Born in England, Deirdre came out to South Africa in 1970 with her late husband, John, and their four children, settling in Randburg. John, who compiled crosswords for The Star newspaper for 20 years, passed away several years ago, but the children and grandchildren all live in close proximity. Deirdre started playing the piano at age five and went on to become a concert pianist and teacher. “I played for the Rosebank Choir for 12 years before teaching piano at Kingsmead College in Rosebank for 19 years.” Today she still teaches the piano, and when asked how she manages to balance teaching with her training, she simply says, “I don’t, it is just chaos! But music and running have so much in common… both require discipline and perseverance, and both provide enormous self-satisfaction.”

Ironically, Deirdre says the word exercise did not even feature in her vocabulary for most of her life. “That was mainly due to the fact that I was born with a missing vertebrae and believed that I had to keep as still as possible. At the age of 38, after having my four children, I underwent a back operation, following which I battled even to lift a teacup while recovering. I eventually got stronger, but always stayed careful of my back.” Then in her seventies she heard she had osteoporosis and everything changed. Now exercise is part of her daily routine, in spite of her busy schedule.

Keeping it Regular
For many years Deirdre has risen early to get her run in, and she says her usual routine is 7km a day at 5:30am, four days a week, with some fitness classes thrown in for cross-training, and a rest day the day before a race, as well as one the day after. “Considering my age, I think two days’ rest is best. I enjoy my rest days, but on other days I don’t just want to lie in bed. There are things to be done!”

Deirdre firmly believes the older you get the more exercise you need, and not the other way around! “I played music at old age homes and retirement villages and some of the people there just went to sleep while we were playing. The only thing that sometimes kept them awake was the cake! People think when they hit 60 they just have to sit and that they are too old to start exercising. I think they should all start with gentle walking and then even some running, but if running is too much they can stick to walking. As long as they do something!”

In terms of running and racing, Deirdre says she really enjoys the camaraderie of the running community. “I once read a letter of a woman saying she is so lonely over weekends. Then I thought of how exciting weekends are for me. I get to go to races and meet so many different people. I am in a happy atmosphere on weekends. People are so encouraging, and when they see me run, they always tell me to keep going.”

Healthy Outlook
Deirdre is a strong believer in healthy eating habits and makes sure her diet is balanced. Breakfast includes ground nuts, seeds and mixed berries with soya milk, while lunch is always a peanut butter or cheese sandwich, and she makes sure dinner includes two vegetables. Her one indulgence is decaffeinated cappuccinos. “I mark my races in a logbook with an A for good and a B for not so good, and those races where decaf cappuccinos are sold immediately get an A, no matter how difficult the route was!”

She reckons her running ability is partly down to good genes and partly her diet and exercise regime, and it is all paying dividend for her health, helping to counter her osteoporosis. Unsurprisingly, she says she would like to keep running for as long as she can, because “I don’t feel my age and I would like to inspire other older people to run. Every morning I get up and feel my legs, say ‘Well, I still have them,’ and then I go run.”