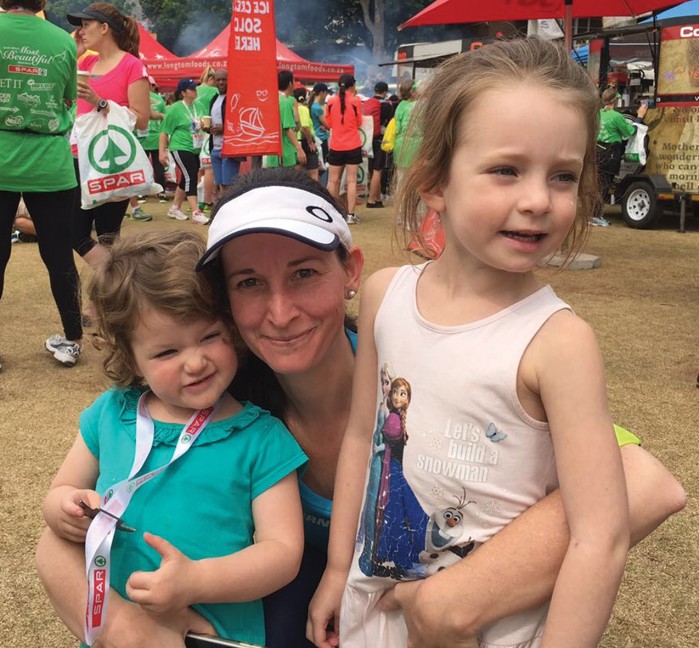 It’s hard to believe that January 2017 will see the first Birthday of the highly successful Modern Athlete #9to5Challenge. Of course, 2017 will be still bigger and better as we plan to spread our wings further over Johannesburg and then into other cities, with the aim to get as many people up and running as possible. This programme has had a terrific impact on people’s lives, like Kate Bredin, who has progressed from the 5km beginner’s programme last January to the 21km programme. Here’s her story.

My husband is very active and one of the reasons that I wanted to start exercising again is because I want my girls to grow up in a home where exercise is seen as the norm rather than a big effort. I can’t very well expect my children to be involved in some form of sport if I am slothing around on the couch! My initial goal was simply to be able to run 5km comfortably. That then evolved into being able to run 5km in under 30 minutes, then to being able to run 10km, then to being able to run 10km in under 60 minutes, and then my goal became to run 21km. I’d like to say that once I have done that, my goals for running will all have been achieved, but I suspect that next I will be trying to achieve a 21km run in a certain time…

I had been trying to convince myself for months to put on some running shoes in an attempt to get healthy, but a combination of exhaustion created by two little girls that aren’t good sleepers (to put it mildly), working full time and the ever-present mother’s guilt (how can I leave my kids all day to go to work and then still go for a run on top of that?), meant that I just couldn’t bring myself to do it. I then heard some friends talking about Jeannie’s 9to5 challenge and decided that it was now or never. My thinking was that if I paid to attend a challenge, then I would be far more likely to force myself to go, because self-motivation clearly wasn’t working.

Over the course of the challenges, I have experienced so many changes and benefits since I started running, ranging from shifting my priorities to make time for something that is just for me for a change, to making new friends, to having a more positive body image. And added to that is the bonus of my cholesterol coming down to a normal level for the first time since having it initially tested 14 years ago, when my mum died. That is a big one for me!

I’ve learnt that that we are so much more capable than we give ourselves credit for, and sometimes you have to “Just do it!” The sense of accomplishment at the end is huge and so worth it.

The #9to5Challenge welcomes new coaches, Sarah Wildy and Jonathan Tudhope, to the team! – BY 9to5 Coach Jeannie Jordaan

Sarah joined the #9to5Challenge Team at the beginning of September, having once been a #9to5Challenger, so she knows what it’s like to be a participant and put in the hard work and dedication to reach her goals. As a registered dietician with the Health Professionals Council of South Africa, Sarah has come on board to provide participants with a personalised meal plan, nutritional support and guidance throughout the whole challenge. She is committed to educating her patients to achieve their personal health and nutritional goals. Her main interest is helping to treat conditions related to lifestyle, and helping people to understand what healthy eating means.

Jonathan, or Jono as he is fondly known, joined the #9to5Challenge Team as an official coach in May 2016. He conducts the sessions at the Bedfordview venue and manages to help challengers get whipped into shape faster than you can say Usain Bolt! Jonathan took up running at the beginning of 2010 and has never looked back, on top of competing in swimming, cycling and triathlon races. He loves to help people and he is passionate about bettering the lives of all those he comes into contact with.

The Perfect Christmas Present for Family or Friend!

The #9to5Challenge takes non-runners to their first 5km race, and upwards, after just nine weeks! To register or get more information, go to www.modernathlete.co.za/ page/9-to-5-challenge, or mail jeannie@run925.co.za.