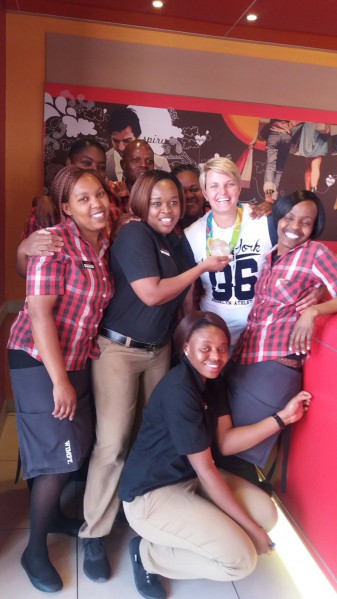 In an incredibly successful career spanning 15 years, Sunette Viljoen has competed in four Olympic Games, as well as the Commonwealth Games, World Champs, African Champs, World Universiade and many major world meets, bringing a veritable treasure trove of medals back to South Africa, including a silver medal from the recent Rio Olympics, and making her one of the country’s all-time greatest athletes. We caught up with her for a Q&A. – BY SEAN FALCONER

MA: Tell us about your younger years and when you started with athletics.
SV: I grew up in Klerksdorp in the North West Province, then we moved to Rustenburg. At school I did all the different sports, from athletics and cross country to tennis, netball and cricket, and if I could have played rugby, I probably would have! After matriculating in 2001, I got a bursary from North West University in Potchefstroom and started specialising in javelin with coach Terseus Liebenberg, who is still my coach 14 years later.

MA: Looking back on all your achievements, what are the major highlights that stand out?
SV: Each medal and title had its own unique meaning, but my Olympic silver medal that I just won in Rio is definitely the highlight, followed by my two Commonwealth titles in 2006 and 2010. That said, my World Champs bronze in Daegu came in one of the best javelin meets ever, with the top two women throwing over 70 metres, while I threw 68m to win bronze and set a new African and SA record. Also, I think I am the only athlete with five African Champs titles.

MA: Do you still feel pressure to do well after such a successful career?
SV: I think I have set a high standard for myself and for the people of SA, so every time I step onto the field they expect me to win a medal. But I think I have grown as an athlete, and at this stage of my career I compete for the love of it. I just want to keep winning medals, because I see how much that Olympic medal means to people at home. Being a sportsperson lets you bring joy to the country, and they unite as a nation in getting behind you.

MA: What keeps you motivated to compete at the top level?
SV: You have to have passion and a love for what you do, and you also need goals. I still have dreams that I want to fulfil in the next few years, like winning the 2017 World Champs, and winning back my Commonwealth title in 2018.

MA: How did you feel going into the Rio Olympics?
SV: I was a totally different athlete than in London in 2012. There I went in as world number one, with a lot more pressure on me, and I wanted that gold too much. Going into Rio I was not number one, so there was less pressure. Also, the Olympic javelin final takes over two hours and you have to stay mentally sharp for much longer, and keep your emotions intact. That is something I taught myself between London and Rio.

MA: What was the Rio experience like for you?
SV: The big difference between London and Rio was the atmosphere in the stadium. In London, there were 110,000 people in the stadium, sitting right up close to the athletes, which created an electric atmosphere. In Rio, it felt more like a local athletics meet, because tickets were expensive and the people of Rio did not fill the stadium. But Rio is a vibrant city with friendly people, and I would love to go back for a vacation, since I didn’t get to see much of it during the Olympics. Overall Rio did a good job, and it was a brilliant Olympics for me.

MA: What do you think winning Olympic medals means for young South Africans interested in getting into the sport?
SV: It’s wonderful to see how much our Rio medals inspire youngsters, but I think they must also know that it is not easy to win an Olympic medal, that the road is tough. We may have wonderful facilities in SA, but other sports offer more money, so many talented youngsters leave athletics, or give up when the going gets tough. If you have a dream, you must pursue it.

MA: You have been very outspoken about athletics administration in this country. What do you hope will change?
SV: We have to look after our talent from a young age. In other countries they have structures in place to do that, and ideally I would like to see our federation being able to pay its athletes. Then we would have a lot more athletes staying in the sport. I am fortunate that I now get invited to compete in Diamond League meets overseas, but others don’t have that, and they need funding to help them get to that level. We also need sponsors in the sport. When I started my career, we had the ABSA Series, and the Engen Series, then the Yellow Pages Series, but all of these sponsors have withdrawn. The bottom line is that our athletics federation is not in a financial position to help its athletes, and companies don’t seem to want to invest in athletics… and yet we are still winning medals, because we have the talent!

MA: What are your goals in athletics going forward, and will you compete again in four years time?
SV: I am nowhere near retiring! Next year’s World Champs in London is a big goal, because I specifically want to win there after my big disappointment in 2012. Then it’s the 2018 Commonwealth Games in Australia, where I want to win my title back. After that I will reassess, and if I have the strength, motivation and passion to carry on for two more years, I will push for the Tokyo Olympics. If I get there, I think I will be the only South African ever to compete in five Olympics.

MA: Any plans for your son Henre to follow in your footsteps?
SV: You won’t believe it, but he recently threw 35 metres, aged just 11! He is such a lovely kid, with a lot of natural sporting talent, so he plays rugby, hockey, cricket, and throws javelin, but I don’t put any pressure on him whatsoever. It is his journey.

MA: When you do eventually retire, will you focus on coaching?
SV: Yes, I really want to build a school of champions, to give young athletes a platform to develop. I already coach kids in my off-season, and enjoy giving back and making a difference. Also, one of my three degrees is a teaching diploma, so I may go into that as well.

MA: What do you do to unwind outside of athletics?
SV: I love fly-fishing! I love going to the Vaal River and catching fish in the rapids. The line just lands in the water and you start reeling them in! I also enjoy quad biking, stand up paddling, going to the movies and nice restaurants, but best is any time spent with my loved ones, LiMari and Henre. LiMari and I have been together for four years, and she was the driving force behind me coming back so strongly from my London disappointment.

MA: What is the legacy you want to leave in SA athletics?
SV: The first day I stepped onto the track at Potch, my coach said to me I will be the best javelin thrower this world has ever seen, and that still motivates me to this day, but I just want to be remembered as someone who never gave up, who kept fighting and throwing through good or bad times. And I want to be known as SA’s best athlete ever.