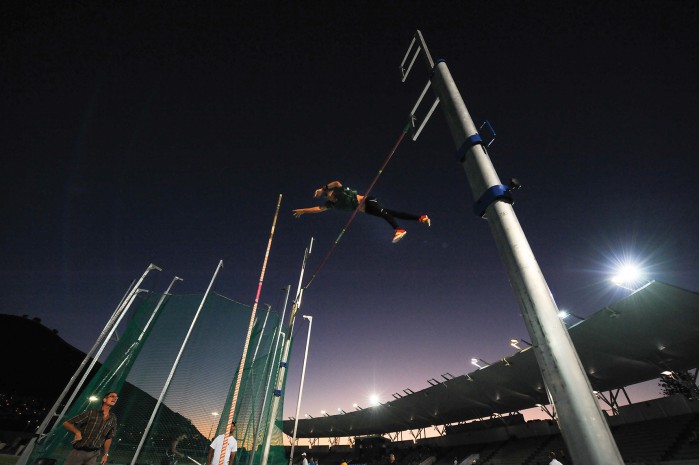 As one of South Africa’s leading sport photographers, Roger Sedres was in Rio in August to cover the Olympics, being right there to get photos of Wayde van Niekerk and Caster Semenya as they won gold in spectacular fashion, as well as all our other athletes. Here’s the story behind the pictures. – BY SEAN FALCONER

It’s not easy being a photographer at the Olympics, nor is it glamorous, says Roger, but it is exciting to be right up close to the action all the time. “We get to see these great athletes in action and witness their achievements, while following them all around the world, but at the same time we’re working incredibly hard and most of the time we’re too busy to really enjoy these moments. I actually saw nothing of Rio, because I was always working and there was literally no time for sightseeing.”

“In Rio, the heat got to everybody, and the biggest challenge for the media was transport, as we were always at minimum one hour’s drive from everything – and that’s not even counting getting through all the security checks! That meant I usually only got home at 3am after covering a days’ action and getting my pics edited and uploaded, and then I had to be up again at 6am to catch the Uber back to the Olympic Park. Added to that, I got sick while over there, and then my laptop crashed, and the cost of food was incredible! Luckily Pieter Lourens of ASA brought me free Macdonalds from the Athletes’ Village each day!”

That said, Roger is just as quick to point out that that he still really enjoyed his Rio Experience. “On the up side, because of my association with Nikon, having been a former ambassador for the brand, I was asked to test the new D5 camera, so I was given two new cameras to use at the Games. That meant that I had five cameras at my disposal, which allowed me to do more remote set-ups, but it also meant carrying five cameras around, along with all my lenses! But it meant I got even more great shots!”

Roger was born in 1969 in Cape Town, attended school in Belhar, and today he lives in Gordon’s Bay with his wife of 15 years, journalist Shireen, and their two kids, Katherine (12) and Benajamin (7). At school he did athletics, specialising in the 100m sprint, and he was good enough to race against future Olympic silver medallist Frankie Fredericks of Namibia in his Matric

year. “However, my best was 11.00, which was not quite good enough, so I switched to the triple jump, until I hung up my spikes in 1992, but I stayed involved in the sport and have never lost my passion for athletics.”

After school, Roger clerked at Old Mutual for a few years, then went to study photography at Peninsula Tech in 1991. “I unfortunately ran out of money after the first year and had to drop out, but ironically, the lecturers told me I didn’t have what it takes to be a photographer. Landscapes and stills were not what I wanted to do anyway, I always wanted to be a newspaper photographer,” says Roger. Dropping out actually proved a blessing in disguise, because in 1992 he saw an advert in the Cape Argus for an advertising photographer at one of the community papers, and he got the post.

The job was mostly taking product shots, but on weekends Roger worked for free, photographing community sports and supplying pics for the Monday newspapers in the group, and that soon brought him recognition for his talent. “In 1992 I won my first competition, The Hunters Gold Photographic Award, for a series of pics taken at a soccer tournament. Then in 1993 I won my first Metropolitan Life Photographer of the Year Award,” says Roger. By early 1995 he was at Die Burger as a news photographer, and over the next 10 years he worked his way up to Chief Photographer, covering events like US President Bill Clinton’s state visit and many jobs with Madiba, but he says the coverage of murders and urban terror began getting to him, so in 2005 he decided to start ImageSA and fly solo.

“I covered everything at first, but evolved into focussing on sport as the 2010 World Cup came around. Then in 2012 I was fortunate to cover the World Indoor Champs in Turkey and the World Junior Champs in Spain, which was my first exposure to international athletics. That same year I covered the 2012 London Olympics, and I learnt so much about covering multiple sports, surviving on minimal sleep, and having to plan ahead for booking sites for remote cameras. Those three meets really put me on the map in athletics, allowing me to build a great relationship with the IAAF, and now I specialise in athletics, although I still cover other sports.”

Now you would think that the photographers at the Olympics and other large meets get to meet the stars of the sport, but Roger says it is actually very hard to build a relationship. “We don’t really get to meet the athletes, because we’re not allowed in the mixed zones where they relax or warm-up. Also, it is imperative that we get stock images of all the major stars, while also focusing on the up-and-coming athletes, especially African athletes, so we have to photograph all the heats as well, not just the finals and the winners.” He quotes Wayde van Niekerk as a good example: “When an athlete bursts on to the world stage, publications and websites, even TV, need stock images of the athlete’s developmental years, but in Wayde’s case there are very few pics of him as a young athlete. That’s why it is important to not only go to World Youth Champs and World Junior Champs, but also local athletics meets. But I have no problem with that, thanks to my passion for everything about athletics.”

We asked Roger to select five of his all-time favourite images in his vast collection of athletics photos.