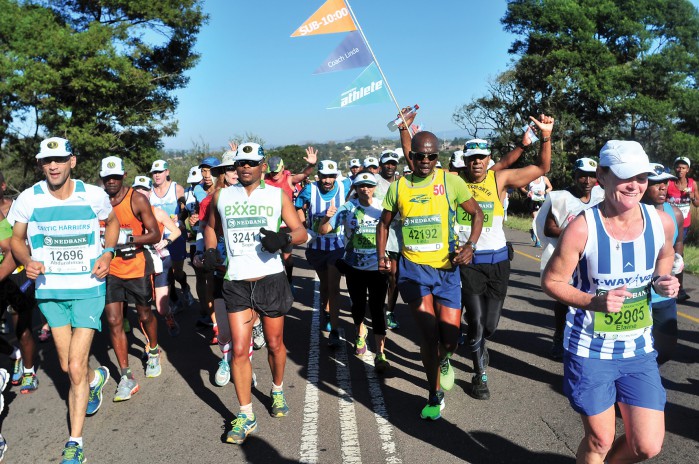 They call him ‘Coach Linda,’ because he has helped so many runners get into running or improve their times, and he is also a regular pacesetter in races around Gauteng and at Comrades, helping others to achieve their goals. Now Linda Hlophe he is planning a pacesetting outing at the Old Mutual Soweto Marathon. – BY SEAN FALCONER

It should come as no surprise that Linda Hlophe is so respected as a runner, coach and pacesetter – and not just by those who have run with or under him, but even those who have just heard about him. That’s because the 52-year-old father of four and Department of Correctional Services official from Pretoria has 46 years of running experience and has been around the proverbial block a good few times! But it’s more than just having run for many years… Linda is one of those guys who can lead, motivate, teach and inspire, and his giving nature endears him to everybody he comes into contact with.

“I can see that people need help, so I try to help them,” says the softly-spoken, ever-humble Linda. “That is why I changed the name of my Zwakale training group to Project Zitande, which means ‘Love Yourself,’ and invited all runners from any club to join our group, for free. I tell them they can all make it, and that even the slowest runners can carry the group to the finish, so we all need to unite, work together, motivate each other, no matter what colour we are, or what club we belong to. The most important thing is to finish the distance we have started. To finish is a great achievement… then you have made your mark, then you are a winner.”

It is this attitude that has seen Linda become a popular coach to many runners -— beginners and experienced alike — and also contributed to him being recruited as a pacesetter. “I had run a few Comrades since my first in 2000 when my friend Madoko Ndhlovu asked me to join him as his ‘timekeeper’ at Comrades, where he was running as one of the pacesetters. When he began to have problems, he told me to take the flag. That experience helped me decide that it was no longer about my times or medals, but about leaving a legacy for others. I want to be remembered as Coach Linda who helped people.”

The Party Bus
That first time carrying the pacing flag has led to Linda taking on pacing duties in many races since then, including seven times at the Comrades, but this year was the first time he did it as an official pacer with Modern Athlete. He brought home a big sub-10:00 bus and was instantly engulfed in hugs, handshakes and requests for photos when he brought the bus home in 9:57, and his passengers in the sub-4:00 bus at the upcoming Old Mutual Soweto Marathon will undoubtedly be just as appreciative of his excellent pacing skills and the awesome vibe he creates in his buses. “We don’t keep quiet in my bus, we sing and motivate each other. I get runners to introduce themselves and talk, I ask where they come from and about their running. We all make friends.”

As a veteran of many Soweto runs and many pacing outings, Linda says he knows what he needs to do to bring the sub-4:00 bus home on time. “Some people say Soweto is too tough, but I want them to see how it can be run comfortably, and Soweto is one of the races that brings the people together. Also, some people are afraid of going into Soweto, but when they pass the heritage sites, they understand. I actually stop the bus to tell people about the heritage sites, like Vilakazi Street.”

Friends and Fans
It also comes as no surprise that when asked what his favourite part of running is, Linda replies that it is meeting new people. “I have made a lot of friends through the years, even guys from overseas, some of whom tell me they’ve heard about the old man, Linda, and that they must come say to him. I love meeting people at races, where I see the diversity of the people of this country. We are united in running, giving our hearts for running, and it is a joy to see people of every colour kissing each other after a race together, then sending mails to say thank you, sending mails to book tickets for next year’s bus.”

“Some of those runners never believed they could make it, and I love making it possible for them. But I have also really appreciated all of the athletes in my buses – they encourage me by putting their faith in me. And as a servant of the people, just like when God tells Moses to take the people to the promised land, I see myself in a similar role, able to do it because He has given me the strength. My dream, my vision, is to see people running marathons and the Comrades, taking part in running, because it changes lives, personality and behaviour, promotes health, and makes you a better person. That’s the legacy I want to create and leave behind.”