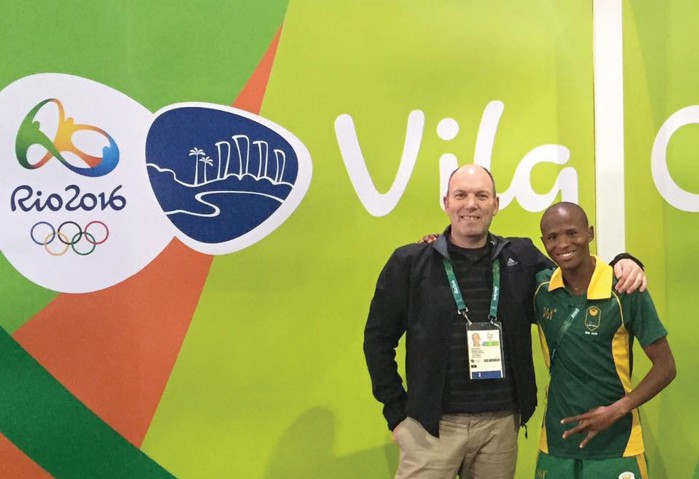 Until recently Chris Britz held many of the SA Records at the various race walking distances on both track and road, with those records dating back to the late 80s and early 90s. His records have finally been beaten, but he continues to give back to the sport as a coach and administrator. – BY SEAN FALCONER

It was time for the 1981 inter-house athletics meet at Hoërskool Linden in Johannesburg, and Chris Britz and a few of his Matric mates were in the mood for some fun, so they dared each other to enter the 3000m race walk event. “I used to run cross country and middle distance, and had never done race walking before, but I actually found it quite easy. At that stage both the Transvaal junior champ and silver medallist were at our school, and I finished third, not too far behind them, so I did a few more walking races, but then went back to running.” Little did Chris know that this inauspicious start to his walking career would see him one day break multiple SA records and come agonisingly close to representing his country at the Olympics.

REPORTING FOR DUTY
Race walking once again came to the fore when Chris went to the Army for his National Service, being posted to the School of Armour in Bloemfontein, where the second in command was a keen race walker. “When it came to the unit athletics day, I signed up for the 1500m, 3000m and steeplechase, but nobody signed up for the race walking, so they asked who had done race walking before. Next thing I knew I had been ordered to enter, and I ended up lapping the second in command, won the race easily, and was sent to the Army Champs!”

After his two-year stint in the army, Chris went back to Joburg to study civil engineering at RAU (now the University of Johannesburg), and joined the athletics club, where he found himself training and competing with other leading walkers such as Stanley Valentine and Willie Vermeulen. He was still running at that stage, but found himself focusing more on race walking. “I was actually part of different generations of SA race walkers, as I competed in 20 SA Champs meets over 21 years – the only one I missed was due to the Race Walking World Cup being on the same weekend in 1995. Through the years we had some really strong competitors, like Stanley, Willie, Michael Brits, Riecus Blignaut and Johan Moerdyk, and we all pushed each other hard in some really tight races.”

The friendly rivalry in the race walking community led to faster times, and that saw Chris start to set SA records at most official distances. “It was always terrific to break an SA record, but probably the most exciting was the 10,000m in Roodepoort, at altitude” says Chris. Johan had broken the 10km road record a couple of months earlier, so I knew it would be a good showdown. We pushed each other all the way to 7000m, averaging 4:03/km, and I knew I had to get away, otherwise I would be in trouble, so I did three consecutive sub-4:00s!”

INTERNATIONAL DEBUT
Another highlight for Chris was finishing first in the 1992 African Champs 20km in Mauritius, in the first international competition that South Africans were allowed to compete in as the Apartheid-era sporting isolation came to an end. “I lost touch with the leaders when I dropped a water bottle going through the refreshment station. I shouldn’t have stopped to pick it up, because I battled for the next three kilometres to catch them again, but eventually I won the race, with Ricus and Johan taking second and third.”

Chris won the silver medal at the 1993 African Champs in Durban, then another continental gold at the All Africa Games in Harare in 1995, in spite of walking the last 7km with one shoelace untied. He also competed regularly in Europe, and says the international race walking circuit was like a big family. “On the track we were competitive, but off the track we often trained together and helped each other getting into races. South Africa is great for off-season altitude training for European athletes, so we helped the Germans and Poles to come out here, and they helped us over there. That’s how I became friends with Polands’s four-time Olympic gold medallist Robert Korzeniowski, and he pulled me to a new SA 5000m record in Polokwane one year while training here.”

DISAPPOINTMENT…
Unfortunately, the big one eluded Chris as he tried unsuccessfully to qualify for the 1996 Olympics in Atlanta, in spite of breaking the SA 20km record in Green Point in early 1996. “Unfortunately, it was only a B Standard Qualifier, but ASA still selected me for the preliminary squad. However, when the team was presented to SASCOC, I was excluded due to not having an A Qualifier. The qualification window was still open, so I went to Germany and broke the record again, this time going a minute under the A mark, but I was still left out of the team.”

“That was probably my best performance, and it was very disappointing not to be selected, but I realise that I was still lucky enough to compete on the international stage. I had been in Springbok teams with guys like Johan Fourie and Deon Brummer, who really deserved international competition, but they missed out due to the sporting isolation. I was younger and still had five or six years of international competition, including four World Cups, the African Champs and the Commonwealth Games. I had wonderful opportunities, made great friends, and raced icons of the sport, so I can’t complain.”

MENTORSHIP ROLE
Having missed out on the Olympics and being in his mid-30s, Chris turned his focus to his career in the transport industry, but as the oldest member of his training group, he found himself in a coaching role when the venerable Oom David van der Merwe passed away. “He coached me when I was still in school and after the army, and when he passed away the younger guys turned to me for advice, so I said let’s give it a go.”

Chris went on to coach several walkers that won SA titles or qualified for World Cups and the Olympics, including Thami Hlatswayo, Marc Mundell, Wayne Snyman and Corli Swart, but it is his current protégé, Lebogang Shange, that has been making the headlines – notably for breaking all of his coach’s long-standing SA records! “Of course it is not happy news to hear your record has been broken,” laughs Chris, “but they are there to be broken. But they can’t take titles away from you, so I tell my athletes, if you want to collect accolades, go after titles. The fact that my records stood so long means that the sport had stagnated, and now it shows the sport is improving.”

Besides coaching, Chris is still involved with ASA, helping to steer race walking in the right direction, and he still competes at the SA Race Walking Champs for fun. “When I retired, I picked up a lot of weight, so I decided to keep walking. I have no major objectives, because I’ve done my bit after more than 20 years competing at senior level, and now I just do it for fun and my health.