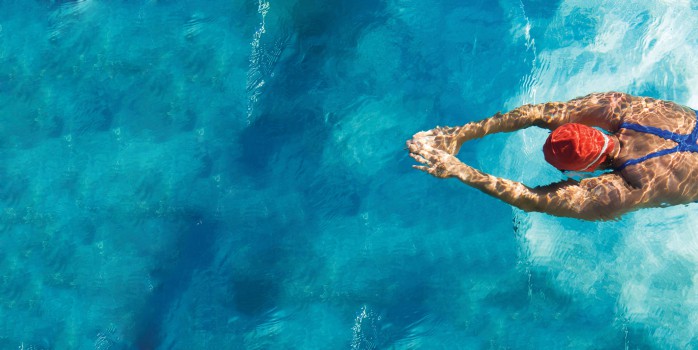 With Summer well on its way and many runners already stepping up their mileage to prepare for the peak running months in the lead-up to Two Oceans or Comrades, it is also an ideal time for these runners to discover the benefits of swimming as active recovery after long or hard runs. Swimming is an easy option that runners can turn to for overall recovery and activating different muscles they wouldn’t use on the road. – BY GEORGIE THOMAS

Swimming to cool down after a hard run in hot conditions is always a treat, but swimming offers so much more. For starters, it is particularly useful for recovery, as the water has a cooling effect on muscles, which enhances recovery. Still better, swimming is non-weight-bearing, so when used as part of your fitness routine, it promotes recovery of muscles, joints and bones. There is an increase in activity of the circulatory system due to increased bloodflow through muscle activity, and swimming also activates the core muscles, which can lead to faster and improved running form.

Furthermore, something that runners might not know about is the beneficial effect swimming has on the brain: Learning and practising new motor-neuron skills has a significant positive impact on the aging process on our brain and body functions. The caveat to all these benefits, however, is that with poor swimming technique, other problems can arise, so it’s not just a case of jumping in. For example, back pain and an unconditioned shoulder can result from hyperextension of the spine from a poor body position in the water. Poor technique can also result in swimming too hard and taxing yourself in what is meant to be a recovery session.

SWIM MINDFULLY
Even runners who swam at school and think they are fairly competent should be careful: That was a long time ago, and the type of swimming you did then was fast and not mindful at all. Runners are also challenged to adapt mentally to swimming in a pool, because with just a black line to look at and little opportunity to chat to mates in your usual running group, boredom could set in, so it’s important for you to up your focus.

Before starting, it’s best to get some advice on technique, to avoid injury and stay motivated. Find a coach who is focused on technique, because just joining a swim squad is not the answer, as these can turn into mini races – especially for the competitive runner. Frustration could also set in as you discover that you are not as good at swimming as you are at running. Squad swimming can result in poor swimmers, but swimming more mindfully will decrease chances of injury and take away the boredom factor. You will have too much to think about as you practise executing a good stroke, and swimming will become a form of meditation and rest from running (and life).

FIND YOUR PACE
Since you are not looking for a major gain in your fitness, it is best to practise swimming in the very lowest range of perceived effort. This might be a challenge, though, if you have poor technique, especially relating to breathing. Seek advice, don’t just try and plough through! Avoid training sessions that you find on the internet, as these don’t speak to technique and will often recommend training aids which may not benefit you. For example, kicking with a kick-board may seem like a good idea, as it will certainly give you a workout, but you are also putting your back into a hyper-extended position, which might cause you pain. The same goes for hand paddles – they add resistance and build muscle, but put strain on unconditioned shoulders and could lead to injury.

You might say that since you only want to swim for recovery, it doesn’t matter how you swim. Well, it does matter. First avoid injury and in time you may discover another joy, aside from running. And it could turn out to be a bonus if you find yourself laid off from a running injury. You never know, you might become addicted to swimming and find yourself lining up for a triathlon or swimming race in the future!

ABOUT THE AUTHOR
Georgie Thomas is the Head Coach of Total Immersion Swimming South Africa. She hails from a distance running background, having run multiple marathons and ultras as well as representing Western Province as the SA Cross Country Championships, before taking on the challenge of open water swimming and triathlon. Having learnt to swim better through Total Immersion, she went on to complete multiple full Ironman events, competed at the Half Ironman World Champs, and medalled at the SA Masters Long Course Open Water Swimming Champs. Go to www.totalimmersionsa.co.za to find out about workshops all around SA, or mail georgie@totalimmersionsa.co.za.