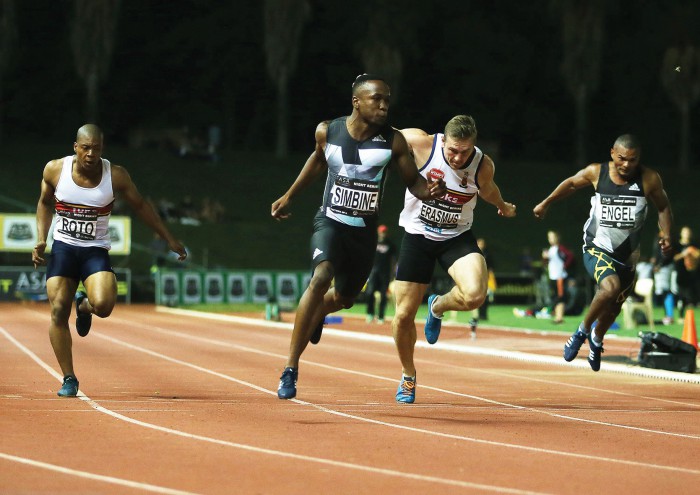 When the men’s Olympic 100m sprint final takes place every four years, millions of people all over the world literally stop whatever they’re doing for 10 seconds and sit spellbound by the spectacle of the world’s fastest men hurtling down the home straight of the athletics track. But for years, South Africans had just watched the race as passive spectators, because the last time a South African had made the final was 1932! Then along came Akani Simbine and everything changed in 9.94 seconds. – BY SEAN FALCONER

South Africa actually has an interesting history in the 100m Olympic final. Reggie Walker won the gold medal in 1908, Herbert Patching was fourth in 1912, Billy Legg finished fifth in 1928, and then Danie Joubert also finished fifth in 1932. But since then no South African had made it to the final. Until 22-year-old Pretoria University student Akani Simbine went to Rio this year. Not only did he make the final, but he ran a sub-10 second time in the semi-final to qualify, then ran another sub-10 time just 90 minutes later in the final to cross the line fifth in 9.94 seconds, finishing a mere three hundredths of a second off the podium. “I’m really happy to have made the final, and proud to be the first South African to run two sub-10s in one day, but I’m disappointed I tensed up at the end and lost that bronze medal. I watched the video and I was actually in third spot. I just tightened up in the last five metres and that’s where I lost it. But I am still very proud of my fifth place!”

Added to the excitement of the night, the 100m final took place directly after the 400m final, where South Africa’s Wayde van Niekerk blitzed a new World Record of 43.03 to claim the gold medal, which really gave Akani a boost as he prepared for his final. “I didn’t actually see Wayde run, because we were still walking into the call room after warming up, but as I was walking through towards the track with Usain Bolt and Yohan Blake, we were actually talking about Wayde. We had all trained together in Jamaica earlier in the year, and we were asking each other what we think he’s going to run… then we looked on the screen and saw Wayde lying on the ground and then saw the time, and we just thought wow, what just happened? Usain immediately said he knew Wayde was going to do it, and it was really crazy standing there thinking my friend just won Olympic gold, and that inspired me to go out there and to do the best I could too.”

What makes Akani’s 9.94 and fifth place in the final all the more remarkable is that Johan Rossouw’s SA record had stood at 10.06 since 1988 until Simon Magakwe finally equalled it in 2012. He then shattered it at the 2014 SA Champs as he became the first South African to go sub-10, clocking 9.98. In 2015 and into 2016, a sudden flurry of fast times saw Akani, Henricho Bruintjies and Wayde van Niekerk also go sub-10, and suddenly SA had four sub-10 sprinters! Akani and Henricho then traded the record a few times until Akani took it outright, then lowered it to a scintillating 9.89 in Hungary in July, just a few weeks before the Olympics… and now the country has an Olympic finalist as well. Heady times for SA sprinting indeed!

Built for Speed
Nicknamed ‘Mr Chill’ because he always seems so calm and relaxed, Akani’s speed was first spotted when he was in high school in Kempton Park, Johannesburg. “I used to play soccer and used to run as well, but only because the principal at our school forced us to run. Because I had the speed, I played wing in soccer, and they would just kick the ball and expect me to run. But then I started doing well in athletics and the principal said he had found me a coach in Germiston and asked me to go meet him. I decided it was a bit too far to travel from Kempton Park for training, but luckily my father found an article in the newspaper about my current coach, Werner Prinsloo, advertising his services. He was based very close to my home, so I started training with him.”

In that first year Akani finished second-fastest youth athlete in SA, and the next year he broke the SA Junior Record with a time of 10.19. From there he worked his way up the rankings, until he was the second-fastest ever SA sprinter with a 10.02, but a sub-10 eluded him. “When I ran 10.02, everybody said I’m so close to nine seconds that it got into my head, and every race I told myself today I’m going to push hard to try run nine seconds, but every time I failed, clocking 10.5, 10.04, 10.02, 10.01. Then in July last year in Slovenia, I ran a 9.99. It was also the first time Henricho and I raced, before we became training partners, and I just wanted to beat him. He was running 10.06 at that time, and everybody kept putting us head to head and comparing us. When I crossed the line, the clock stopped on 10.0 seconds dead, but when I turned around they had rounded it down to 9.99 and I just thought wow, I can’t believe it’s actually happened.”

Two weeks later Akani ran a 9.98, and he says from then onwards it just got easier, and to date he has run seven sub-10 times. “I told myself to stop chasing the time and just focus on my phases, and now when I get onto the track I feel the nine seconds will just come. Still, Getting into that elite sub-9.9 group is something special, and for me, jumping so much in a year is a bit crazy.” Unsurprisingly, the speedster is now also hot property in the media, being flooded with interview requests, appearing on television and magazine covers, and being recognised when he goes out. “A lot has changed… the other day I walked into a mall and I saw a couple of guys staring at me, and I wasn’t sure what to do, so I just smiled, said hi and walked on. It’s great to get recognition and to know that the people of SA are backing us. That’s why I always enjoy signing autographs or taking a pic with a fan, to say thank you for their support.”

Friends and Rivals
Akani is based at the High Performance Centre (HPC) at the University of Pretoria, and says it really helps being in a competitive but healthy sport environment, especially since he gets to train with many of the country’s top sprinters and gets to interact with other top sportsmen and women. “It really helps being in an environment with fellow athletes with the same goals and same drive. We’re all trying to be the best, and faster than the day before, so it’s always beneficial having guys around you that are pushing you.”

“But it’s not just about rivalry and competition… it is also beneficial to have someone that you can be friends with and talk to, and share a laugh with. That’s one of the things I picked up earlier this year when I trained with Usain Bolt in Jamaica. He told me he is enjoying racing more now because he doesn’t stress and doesn’t put pressure on himself. He just goes out there to have fun, and he’s winning with that mentality and game-plan. Usain and I talk often nowadays on social media. He’s one guy I really look up to, because he’s done so much for the sport and brought it up to another level – and he’s done all the stuff that I want to do. He’s the greatest in the game, and we all aspire to be the best.”

Naturally, Akani is very excited about the future of sprinting in this country, and he says the world needs to watch out for our sprinters. “I believe that we can become a dominant nation in the sprinting world, because we have the talent here in SA. I think it’s just a matter of time before we become a country like Jamaica or the United States, where you have to run a sub-10 just to get into the final at national champs. I think we’re going to see more guys breaking 10 seconds, and 20 seconds for 200m or 44 seconds for 400m… We have the potential to dominate, and not just in sprinting, but also in middle distance. We just need to keep working hard and make sure we reach our potential.”

Setting Targets
Now that the Rio Olympics and the 2016 athletics season are done, Akani is taking a well deserved rest, although he does still have his studies to complete. “I’m nearly done with my studies, but as I keep telling people, I’m going to get my degree and then just give it to my mother – here, this is yours – and then I’m going to go run full-time and focus on that. My goal is simple, to be the best that I can, and having run 9.89, now I want to go faster. It’s about wanting more and doing more, and knowing that I have potential still to reach. I have stepped up a level, but I know there is another level to aim for. I don’t know where it will end, but I know I am most definitely going to get faster. And I want to be there in 2020 for another shot at gold!”