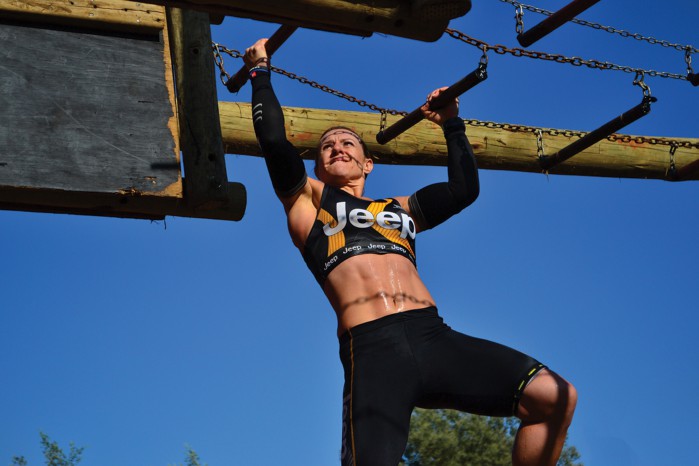 When Team SA heads over to Canada in October for the Obstacle Course Racing (OCR) World Champs, the most excited member of the team may well be Carina Marx, since it will not only be the first time she is representing her country, but also the first time she travels abroad! – BY SEAN FALCONER

Unsurprisingly, Carina Marx can’t wait to get on the plane that will take the South African OCR World Champs team to the Blue Mountain Ski Resort in Ontario, Canada, as she has never left South African shores before. The 33-year-old will be part of a strong team featuring a host of athletes who medalled at last year’s World Champs in Cincinnati in the USA, and she says she is really looking forward to seeing what she can do on the world stage. “I actually qualified for last year’s World Champs in Cincinnati, but decided not to go as I didn’t feel ready to compete against the best in the world, having only started with OCR in 2014. But this year I feel ready to give it a go, and I have chosen to compete in the elite race so that I can go up against the best in the world. That’s because I’m an all or nothing type of person,” says Carina.

The SA team will attend a training camp at Afriski in the Drakensberg in September, to train at altitude in cold conditions to better prepare for the cold conditions of Canada, especially after last year’s brutally freezing conditions in Cincinnati that had many a competitor reaching for warmer clothing and hot drinks. “Hopefully the training up there will prepare us for World Champs, and my aim for my first World Champs is to finish in the top five,” says Carina.

“I’ll be the only South African woman doing the elite race, because the other girls will be competing in their age categories, while Hanneke Dannhauser was going to race elites with me, but can only do the sprint and team events on the Sunday due to being a Seventh Day Adventist and not being able to compete on Saturdays. I’m just going to give it everything, because it will be my first time representing my country and I’ve never felt as good about something as I do with OCR. It will also be my birthday while we are at World Champs, so I am hoping for a great trip!”

Sporty and Active
Born in Vryheid in KwaZulu-Natal, Carina has worked as a personal trainer since finishing school, currently working out of the Melrose Arch Virgin Active in Johannesburg. She was known for her swimming while at school, going to SA Champs a number of times, and says she also played tennis, did athletics and rowing, and pretty much everything else. “I never went to the upper level of any sport after school, but I did try adventure racing, mountain biking and later trail running, and now my focus is on OCR.’

Carina is engaged to former SA under-21 and Western Province rugby player Jeremy Reingold, who also broke the swimming world record for the 200m individual medley in 1980, and they plan to tie the knot next January. “He is super proud of me, to the extent that I sometimes get a bit embarrassed, but if not for him I would not have believed I could do this. He has played a major role in my success, and also manages our Jeep OCR team as well as my PR, so he is a man of many talents.”

Jeremy has two kids from a previous marriage, Sienna (10) and Max (5), and he says “they look up to Carina in so many ways and I can only say that she is treasured by them and I, with an uncanny ability to care for all of us regardless of her work and training schedule. They also love OCR and do the kiddies races at all the events Carina and I go to. I suppose it’s evident that I am a huge supporter of Carina, but its hard for me not to value the balance she has in humility, family, work and achievement. I suppose as manager of the OCR team I live vicariously through Carina and the athletes’ achievements, and I love the sport for its inclusiveness and the hard work it belies.”

Overcoming Obstacles
Carina stepped into the OCR elite sphere in October 2014 when she took on the Black Ops level at a Warrior event for the first time, and finished a highly creditable fifth. The Black Ops level is so tough that many competitors, men and women, often cannot finish officially, having failed at a certain obstacle, accepted a penalty of burpees and then proceeding with the race, although no longer in the overall classification. “I wanted to qualify for the Warrior finals that year, so I really pushed myself in that first race, and I was really happy just to finish,” says Carina.

“Then in 2015 I did all eight of the Warrior races, as well as all four of the Impi races, plus the Beast and a few others, and I am very proud of the fact that I am now up there challenging the best girls in the sport.” Typically humble, she has to be prodded to add that she won the Beast last year, and had three third place podium finishes in Warrior, followed by two second places so far this year. And one of the keys to her success has been the improvement in her running. “In OCR, my strength is my upper body strength, while running is my weakness, so to say, but I have improved a lot in the last 18 months. I have never been a super runner, but I have worked hard at it and now I can compete with the top trail runners in OCR, like Trish Bahlman and Dominique De Oliveira, who are phenomenal athletes. Two years ago I would not have even thought of competing with girls with so much running experience.”

Challenges and Camaraderie
Naturally, regular podium finishes, an increasing number of sponsors coming on board and an upcoming overseas trip for World Champs means that Carina is really enjoying OCR, but she adds that there is more to it than just success. “I love the fact that you can’t get bored with OCR, because it challenges you and makes you grow as an athlete after every race. It always has a surprise or five to challenge you, not only your physical ability, but also your mind. It’s a versatile sport that always encourages you to become the best athlete you can be. There is also a lovely spirit in the sport – we’re all friends that get along very well. We’re competitive, but do it in good fun, and even help each other in races if we see a rival going wrong, because I think we all want to develop the sport and lift the standards to be up there with the best in the world. So let’s see how we go at World Champs!”