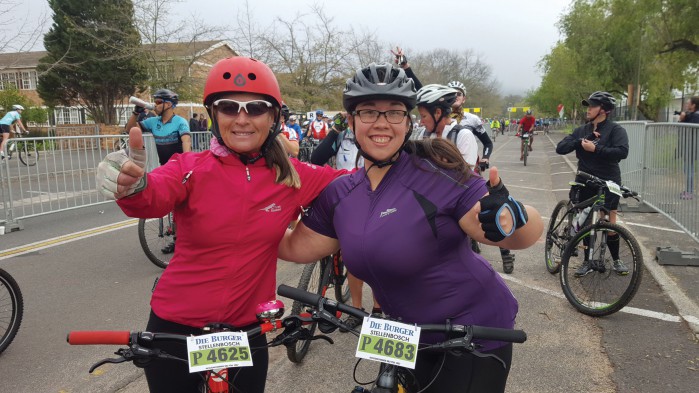 Being disabled is just a label that people give you, but you are more than just a label – and you capable of anything, as long as you apply your mind and go at it with a can-do attitude. That’s the message that Samantha Stander sends out to the world every day, including when she gets onto her mountain bike. Especially since she mastered the gears… – BY ROXANNE MARTIN

When Sam was born in 1993 with Congenital Developmental Dysplasia of both her hips, the doctors told her parents Wessel and Beverley that she would probably never walk. The condition means that her hip joints are out of place, so with each movement grinding of bone on bone occurs. As a baby the outlook for the rest of Sam’s life looked bleak, but her parents were determined to give her a fighting chance, so she was put into a Spica Cast in the hope that it would force her joints into a position that would make walking possible.

After 15 months, however, having seen no improvement, the doctors said there was nothing more they could do. But then on 23 December 1994, Sam took her first steps and began a journey of defying the odds, which today sees her not only walking, but also running, participating in obstacle course races, and more recently even taking part in mountain biking races. Sam is a remarkable young woman with an incredible attitude towards life, but she has had to overcome many hurdles to get where she is today.

In the Shadows
Growing up, Sam found herself on the sidelines because her condition prevented her from participating in any sport until she was 16, as she had to wait for her bones to grow fully. “I wasn’t a very social person, and I would shy away from going out. I played chess and would do first aid, but nothing else,” she says. But that all changed after her 16th birthday, when she could finally take up sport. The first sport she tried was hockey and she played goalie, since running wasn’t much of an option for her, but she was ecstatic just to be on the field. “I was part of a team, and for the first time in my life it felt like people knew who I was,” says Sam.

It lit a spark in her that propelled her out of the shadows and she quickly transformed from someone who shied away to someone who loved being involved, and loved being a team player, with a vibrant, bubbly personality. “I started wanting to interact more with people. I had been overweight my entire life, and I was a victim of bullying, and then suddenly that was over. I felt like finally I belong somewhere, that these guys accepted me for who I am,” she says.

Suddenly Sports Mad
Free to experiment at last, Sam was determined to try everything, and that saw her take up Modern Dancing, but she soon realised she just didn’t have the flexibility it required. That didn’t hold her back, though, because she quickly changed to hip hop dancing instead. “I don’t really have limits,” is Sam’s response when asked about her sport and activity choices. “I am prepared to try everything once, even if I find I can’t carry on with it. I’m just happy to try, and give it my all.”

Settling on hockey, squash and hip hop, Sam remained incredibly active while she was still at school, but when she began studying medicine at Stellenbosch University, she found the academic demands left her less time for sport. That saw the weight started piling on again, but this time Sam was determined not to go down the same path and so she decided to find a way to keep active and healthy… by taking up trail running. Well, more a very slow walk/run, as Sam puts it. “Walking and running affect my hips a lot. I am much slower than other people, and I run 100m, walk 200m, because of the pain. Also, I sometimes have to take muscle relaxants just to help me do what I need to,” she says.

Not deterred by the pain, Sam kept at it, taking part in some form of sporting event every weekend, and taking note of all the sporting activity going on around her at her campus dorm. Then one Saturday afternoon she was intrigued when once again her friend Jano Venter returned to the dorm covered in mud. Driven by her curiosity, she asked him what he had been doing, and he replied, “Mountain biking.” Typically, Sam’s immediate reaction was “Well, I have to try this,” and soon she had delved into the money she had saved for a ‘rainy day’ and put it to good use to buy a Scott Aspect 910 29er. The bike was in a box for two days before she could put it together with Jano’s help, and the comedy that ensued once the bike had been built had everyone in fits of laughter.

Riding Lessons
Getting on to the bike was the first hurdle, because of her condition, and it required lying the bike down flat, stepping over it and then lifting it up. With that problem solved, Sam looked at all the components and switches on her bike and that had her in a mild panic. “I had never ridden a bike with gears, I had only ever ridden single speed hand-me-downs where you were scraping off the rust,” she explains.

The ever-patient Jano just said, “No problem,” and the two of them went round and round the dorm quad, with Jano jogging next to Sam on the bike, trying to explain how the gears worked. “I had no idea what he meant when he said go up in the front, down in the back, and I wish someone had recorded it,” laughs Sam. Nevertheless, with her trademark determination, Sam persevered and eventually was able to ride and change gears at the same time… and naturally, her next thought was “Okay, great, I should do a race now!”

Racing Debut
Starting small, Sam headed to the PPA Tread Lightly 5km mountain bike race, where she would ride with Jano’s seven-year-old brother, Rikis. Arriving at the race, she waited in the car for Jano to get there, as she hadn’t learnt how to reassemble her bike yet, and it was here that her nerves went through the roof! “Before the race, I couldn’t eat, I couldn’t sleep, I was so nervous, and when the MC saw me and recognised me, he tried to talk to me, but I couldn’t. My nerves were shot,” says Sam.

With the bike assembled, she lined up at the start, the gun went off and everything seemed to be okay… until they got to the first incline. “I still didn’t understand my gears, and when I got to the climb, I didn’t know what to do,” says Sam, adding that a mild panic ensued. “I just kept telling myself to keep smiling,” she says, and when she finished the race, that smile became uncontrollable euphoria. Of course, Rikis beat her in that race, but it just made her more determined, because the bug had bitten. This, Sam had decided, was the sport for her!

Less than three weeks later Sam completed a 10km race – by then she had figured out the gears, which made things much easier – and then she decided it was time to up the ante, so she entered the Die Burger MTB Challenge 30km race at the end of July. In the week leading up to the race, Sam’s nerves kicked into overdrive: Sleep was non-existent, her appetite was nowhere, and she stressed about what would be the furthest she had ever ridden on a mountain bike. Then on race day Sam woke up to wet, rainy conditions, but her determination to make the race cut-off was undiminished as she started. “The trail was wet, with long climbs, but I was determined not to get off my bike, so I went into my granny gear, and I didn’t get off!” And when her quads screamed in pain, she screamed right back at them, “I’ll give you something to cry about!” Two hours, 30 minutes and 10 seconds later an ecstatic Sam finished, with another big smile.

Many More to Come
With that 30km ride under her belt, Sam says it was just another step in an exciting journey, with many more races to come, and she is already thinking about taking on the Cape Town Cycle Tour. That said, her condition is never far from her mind, even though cycling is a lot easier on her hips than other sports she has tried. A double hip replacement is unavoidable eventually, and the only small amount of control Sam has is exactly when the operation will take place. She says she would like to wait as long as possible, as after she has the first replacement, she will have to have repeat the operation every eight to 10 years.

“While the op will help me, I will need a lot of rehab, which will mean a lot of time away from my studies, or my work,” says Sam. She adds that her studies are incredibly important to her: “I want to specialise and become an orthopaedic paediatric surgeon, so that I can help children that have the same condition as I do. I don’t want anyone to have to suffer like I did.” And it’s this attitude towards her work that really sets her apart, just as it does in her mountain biking, where she has challenged herself to complete 30 events. She has already done 19, and she says, “I just want people to realise that if they really want to do it, that they can!”