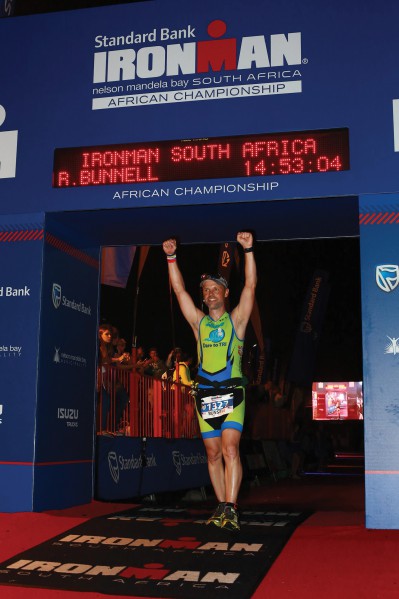 The Modern Athlete DARE TO TRI Programme has helped many athletes get a start in the diverse world of triathlon, with many going on to complete the Ironman, and this month we hear from one of them, Russell Bunnell.

In July 2012 I had broken my ankle in a motorbike mishap and just after I got the cast off, I was diagnosed with testicular cancer. After two months of chemo, I had lost a lot of weight and was physically at my worst. It was a slow road to recovery the following year, but I managed to gain back all the weight, and then some. I was planning to get married in December and a few months before that I decided to start running to get back into shape. I could barely run 3km at the start, but I joined a local running group and kept at it for the next year and a half.

I managed to finish the Vaal Marathon in 2014 and tried to complete the Two Oceans a month later, but bailed out halfway through with severe ITB pain. My Comrades dreams were dashed, but a short while later we went out to lunch at some friends, where I picked up a Modern Athlete, and as I was flipping through the magazine I saw an advert for the DareToTri training programme. I thought this was how I was going to redeem myself, so I contacted coach Derick, bought a bike and started training with them.

I struggled with the biking at first, but I kept at it, and after a few months of training I signed up for my first triathlon, an Olympic distance race, the 2015 Ironman 5150 at Bela Bela. I was totally hooked and followed the Derick’s programme and advice, eventually completing another 5150 later that year in Germiston, and then the Midlands Ultra, a half Ironman distance race, in March 2016.

At this point I had fully committed to the long hours of training to get me to the full Ironman race in Port Elizabeth in April, and it was an amazing event. Almost 15 hours of pain, elation, cheering crowds and fantastic scenery along the way, and I will never forget the moment of turning the final corner to the red carpet and hearing the announcer shout into the microphone, “Russell Bunnell from the USA, YOU… ARE… AN IRONMAN!”

Thanks to Coach Derick for organising this programme, which turns normal people like me into Ironmen, and to my wife Jabu for all her patience and understanding during the long hours of training. See you all on the road!

The current Dare to Tri programme that we are training on is based on competing in 5150 events (1.5km swim/40km bike/10km run), but if your goal is a sprint triathlon (750m swim/20km bike/5km run) and you don’t want to follow the 5150 programme, we can simply adjust the programme for you.

Some bad news is that the 5150 Germiston Lake event has been cancelled and replaced by a 5150 event in PE on 20 November. This is because the Ironman organisers are unable to sustain the Germiston event without the backing of the City of Ekurhuleni, which is unfortunately unable to renew its partnership with the event. I have also not yet seen updated information on whether the Discovery Duathlon that was held in Sandton in October last year will be repeated this year. So for now we continue working towards the events listed below!

You cannot get this level of coaching, including coached weekend group training sessions, for this period (10 months) at this cost anywhere else, so please go to https://daretotri.canbook.me/e/view/10091 and follow the prompts to register.