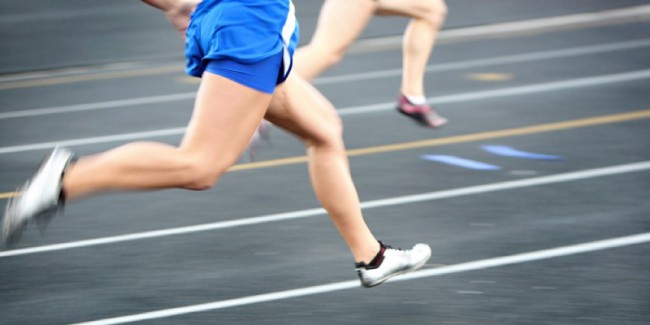 Speedwork doesn’t just make you run faster. It makes you fitter, increases the range of movement in your joints, makes you more comfortable at all speeds, and will ultimately help you to run harder for longer. So, if you’re ready to add a speed session or two to your training programme, here are a few great sessions to help boost your speed. – BY SEAN FALCONER

We all like running fast and breaking PBs, or having the kick to finish a race in style, and the best way to get faster is by adding some speedwork to your training programme. Try to fit in at least one session a week, and if you find one that you really like, just keep adapting it by adding reps or increasing the distances as you become faster. If you’re interested in improving your pure speed – you want a killer kick – then concentrate on shorter reps, like 200s or 400s. If it’s speed endurance you’re after – you want to run longer distances faster – then try the longer intervals. Naturally, mix pure speed sessions with speed-endurance sessions for the best of both worlds.

For these workouts, you need to know your ‘race pace’ for distances from 400m, 800m and 1500m/mile on the track, up to 5km, 10km and/or the half marathon, so take your current racing times on the road as a starting point, and measure your best times on the track, then increase your race pace as you get stronger and faster. Just remember, speed sessions aren’t about sprinting flat-out until you’re sick. They’re about controlling hard efforts and spreading your energy evenly over a set distance or time. Also, speed training should not account for more than 15 per cent of your total mileage per week, so it’s about quality, not quantity. Now go give these awesome workouts a try!

3.PYRAMID PLAN:Do a pyramid session, starting with a short distance, gradually increasing, and then coming back down again. For example, start at 100m, add 20m to each rep until you reach 200m, and then come back down to 100m. Run these at 400m pace, with a walk-back recovery. Pyramids work for long distances too: 1000m, 2000m, 3000m, 2000m, 1000m at your half marathon race pace, with a three- to four-minute recovery jog between each effort.

4.DESCENDING LADDER:This workout involves steadily decreasing intervals run at a steadily increasing pace. For example, run 500m, 400m, 300m, 200m and 100m, starting at 800m pace and getting increasingly quicker on each rep. The recovery between each rep should be 60 seconds. For a longer workout, start with three laps of the track (1200m) at your 5km race pace, then step it down to 1000m, 800m, 600m, 400m and 200m, running each interval at a slightly faster pace. Don’t worry too much about exact pace – focus on the feeling of running faster with each step down. Take a 90-second recovery jog after each interval.

5.SNEAKY MILES:Run three 400m intervals interspersed with 200m recovery jogs, all without stopping, and it adds up to a mile (1600m). The 400s are run at 800m race pace, while the 200s can be done as easy as you like. The result is a slower mile time than you would normally run, but the benefit comes from the three faster 400m segments. Do three sets per session, with five-minute slow recovery jogs between sets, and as you get faster, gradually speed up the pace of the recovery 200s. To add another dimension, run the final 400 faster than the first two.