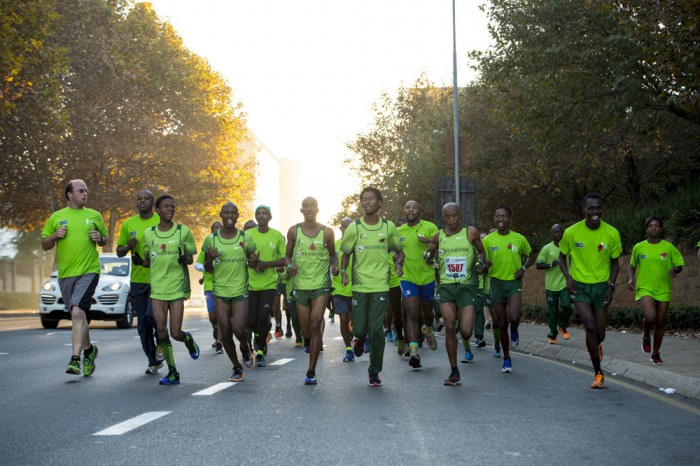 SANDTON, JOHANNESBURG, 11 MAY 2016 – Today, 11th of May 2016, Comrades Marathon major sponsor, Nedbank, hosted their elite Nedbank Club runners from around the country at Nedbank’s Head Office in Johannesburg for an official Nedbank Running Club media launch and Comrades marathon send-off.

This is the first time that Nedbank has hosted its top Comrades Marathon gold medal contenders in the same place at the same time prior to this major race. This momentous occasion allowed media the rare opportunity to interview these elite athletes prior to the Comrades Marathon.

The send-off began at 7am with a 5km fun run/walk around the Nedbank Head Office in Sandton, involving Nedbank Running Club elite runners, their coaches and managers, plus Nedbank staff and executive management, and the media. This was followed by a Nedbank-sponsored breakfast during which Nedbank CEO, Mike Brown, gave a heartfelt speech wishing all runners good luck for their 2016 Comrades Marathon endeavour.

Pro runners flown up for this event included Nedbank Running Club’s Claude Moshiywa, who was the first South African winner of the Comrades Marathon’s ‘Up Run’ in 21 years when he claimed victory at the 88th marathon in 2013. Moshiywa placed 3rd at the 2011 marathon and 7th at the 2015 marathon.

“This rare but fantastic official media launch and CEO send-off, for and by the Nedbank Running Club, was aimed at giving elite Nedbank-sponsored athletes, Nedbank employees, and the media, the rare opportunity to interact in a fun and informal atmosphere. The send-off was about celebrating the growth of the Nedbank Running Club and how it continues to add immense value to thousands of social and Nedbank Dream Team elite runners across the country.

This momentous occasion in Nedbank history also offered our CEO, and our formidable runners, the heart-warming opportunity to say hello and thank you to one another, which was an amazing experience for all of them,” said Tobie Badenhorst, Head of Sponsorship and Cause Marketing at Nedbank.

Nedbank CEO, Mike Brown, took the opportunity to announce that Nedbank has signed a further three-year sponsorship deal with the Nedbank Running Club, which will extend the bank’s support for the club to 2019. Launched in 2008, the Nedbank Running Club’s core focus has been to bring running enthusiasts together in a social but competitive environment, also identifying and guiding talented individuals to their full potential in the sport. Under the expert management of Nick Bester (past Comrades Marathon winner), the Nedbank Running Club has 13 branches in 12 cities around South Africa, and has grown from a base of 1 200 runners in 2008, to 3 800 runners in 2015.

Testament to its success, Nedbank’s representation at the 90th Comrades Marathon in 2015 saw more than 1000 Nedbank Club runners enter the event, with nine of the 20 gold medals going to Nedbank Club members.

“Nedbank remains a dedicated supporter, and sponsor, of South African runners. Running provides opportunities for all South Africans across cultural, racial and financial barriers. Running is truly a sport for all. We look forward to once again seeing the Nedbank colours fill the streets in the 2016 Comrades Marathon,” said Badenhorst.

Said Badenhorst, “Four years ago, 17-year-old Sandile Mbili from Diepsloot in Johannesburg lost his legs due to a bacterial infection. The amputation confined Sandile to a wheelchair. This affected his life tremendously, especially getting to and from school as most taxis would refuse to pick him up. With the help of two non-profit organisations – One School at a Time and the Jumping Kids Foundation – Sandile has been fitted with prosthetic legs.”

To motivate Sandile to walk again using his prosthetic legs, the Jumping Kids Foundation launched a Twitter campaign called #GoSandile, which encourages everyone to tweet motivational messages to him, using the #GoSandile hashtag. These tweets are printed out and given to Sandile at each of his physiotherapy sessions, encouraging him to take another step to success.

“Nedbank truly believes in this positive campaign to encourage and motivate Sandile to run again, and have challenged Sandile to do something incredible – they have challenged him to run the Nedbank Green Mile, which is 1.6km, at the 2016 Comrades Marathon,” said Badenhorst,

Badenhorst says that this distance will be physically and mentally challenging for Sandile, but what will motivate him tremendously is that he won’t be running for fun, he’ll be running to raise funds for other child paraplegics in a similar situation to himself.

To help Sandile help other runners like himself – simply send a tweet of encouragement to @PhambiliSandile with the hashtags #GoSandile #NedbankGreenMile.

With all the tweets received, Nedbank will create a 1.6km Twitter track at the 2016 Comrades Marathon Nedbank Green Mile for Sandile to run over. For every Tweet that Sandile receives and is used for the track, a donation will be made to the Jumping Kids Foundation to help more paraplegic children get prosthetic legs.

Said Sandile, “I am so excited. I like helping people. I can see the difference that these legs have brought to my life and if I can help people by just running, I’ll never stop.”

Nedbank is an official major sponsor of the 2016 Comrades Marathon.

The first Comrades Marathon took place on 24th May 1921, Empire Day, starting outside the City Hall in Pietermaritzburg with 34 runners. It has continued since then every year with the exception of the war years 1941-1945, with the direction alternating each year between Pietermaritzburg and Durban, the so called up & down runs.

The Nedbank Green Mile is the only official spectator point along the marathon route, offering Comrades supporters a perfect vantage point to view all the race action. It is located along Old Main Road in Kloof and is just 26km from the finish line in Kingsmead, Durban.

Entry into the Nedbank Green Mile Spectator Zone is free and festivities start at 8am.

This year the 89-km marathon starts in Pietermaritzburg and ends in Durban on 29 May 2016.