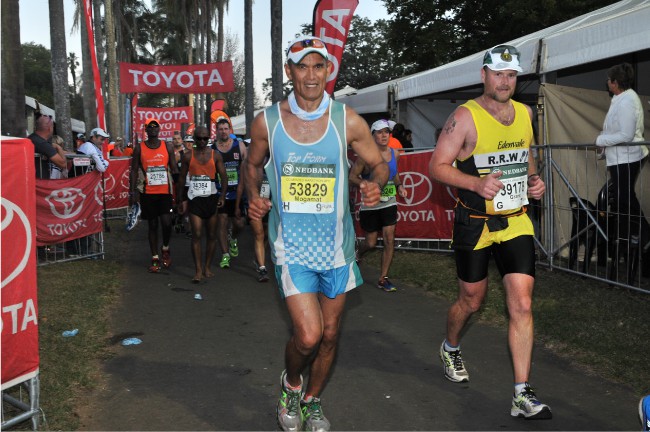 When I suffered sudden chest pains early in a race, I had no idea how serious the problem would turn out to be. – BY MOGAMAT PHALDIE CASSIEM

It was during the Grape Run Half Marathon in Constantia in October 2013 that my life as a runner for the past 21 years changed dramatically! After starting the race in good spirits, just 1km into the race I felt this pain in my chest and stomach! It felt like a burp that does not want to come out! The helpful marshal standing at the robots came over and said that I must rest against the pole and hopefully I will feel better in a few minutes, and when the last runner came past, I thought let me start running again. Immediately the pain started again and I knew something was seriously wrong.
I have always said to myself, should I ever have any unexplained pain or discomfort, I will not force myself to keep running, but rather bale and get medical advice, as there will always be more opportunities to run races. A million concerns went through my mind as I walked back to my car. I knew I should get to a doctor or hospital, but being a Sunday, and seeing that my chest discomfort did not seem to bother me when I walked or sat, I waited till the Monday to visit my GP, who said, “Take this medication and come see me again in a few days’ time if the symptoms persist.” Well, I went back feeling worse, but he said that he could not find anything seriously wrong, and maybe I need to see a psychologist…
You see, I had told him that my family history involved cardiac problems stemming from high cholesterol inherent to my Indian lineage on my mother’s side – both my mother and sister died from cardiac arrest at 53 and 51 years of age respectively, and I was 55. I sensed that the GP thought I was being paranoid, but I insisted to be referred to a physician. I ended up at the Sport Science Institute in Newlands to see Professor Derman and after the consultation, which involved a series of ECG, Echo tests, etc, I was told that that it was the luckiest day of my life – that because I pursued immediate medical advice, chances were good that after medical intervention to correct the problem, I would be able to be fit and healthy to run again.
Caught in time
The diagnosis was Cardio Vascular Disease, which means my arteries were narrowing, and if not treated, could lead to a heart attack! After the necessary procedures, three stents were inserted into the main artery leading to my heart – all it took was about 20 minutes in theatre – and if no unforeseen issues came up, I would be running again soon. Well, this never happened, because I was going through the worst period of my life, with side-effects such as cold sweats, numbness in the legs, loss of appetite, insomnia, etc.
I felt I was going to die, but my wife, a professional nurse, reassured me that I must stay positive, and she found out that the possible side-effects of some of my medication may be the cause of these symptoms. There it was… statins, beta-blockers, specific pain-killers that all could give rise to what I was experiencing, and not from the stent implants! However, two months later I was still not feeling completely recovered and decided to go for a second medical opinion as to why I was still feeling so uncomfortable, let alone not being able to run yet! I ended up having to go for another angiogram and another four stents were implanted.
On the road again
It was February 2014 when I did my first half marathon in the Strand and was I ecstatic! Tears of joy were running down my face in appreciation that I had been blessed in so many ways to be back on the road. My heart goes out to those fellow runners that over the years may not have been given such a second chance! I remember a few years ago during Comrades when two runners lost their lives. May God have mercy and protect and guide each of my fellow runners to share many more enjoyable races!
Speaking of Comrades, I completed my 10th run in 2015. In spite of the medical intervention, the medication I have to take every day for the rest of my life, and the reduced training time I had to prepare, I still finished in 11:37 with enough time to spare before the 12-hour cut-off! I will be doing my 11th run this year, God-willing, and the good news is that continuing running is possible even for those suffering from Cardio Vascular Disease… but first seek medical assurance!