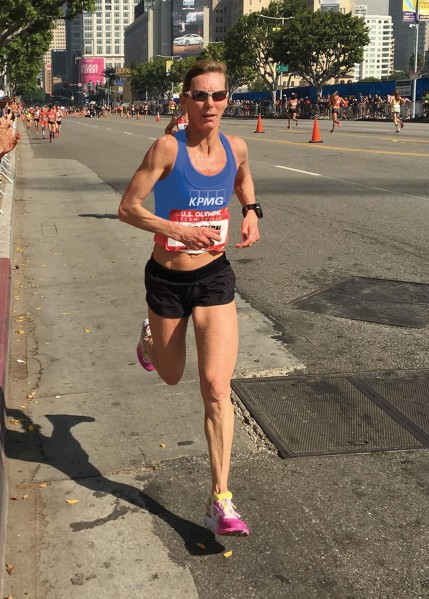 It’s been years since US-based Colleen De Reuck competed in a South African running event, but on 26 March she will line up for the Old Mutual Two Oceans Marathon, thanks to sponsors KPMG, and then in May she will take on the Comrades Marathon, to finally run two of her all-time bucket list races, and make one of the most anticipated ultra-marathoning debuts in the history of SA road running! – BY SEAN FALCONER

She’s a four-time Olympian, a World Cross Country Champs bronze medallist, holder of two former world records, winner of Big City marathons in Europe and the USA, as well as holder of multiple SA and US titles, and can even lay claim to being an age-group World Champion at both IRONMAN distances, but now Colleen De Reuck (52) is set to finally take on the two biggest ultra-marathon races in her mother country. Naturally, the pundits can’t wait to see how she goes, but she is taking it all in her stride, simply saying that she has always wanted to run both races.

“My husband Darren was fourth in the Two Oceans Marathon in 1992, and my brother Colin was 10th the previous year, and my sister-in-law Kerry also ran it in 1991. In the Comrades, my Dad, Frank, ran it 15 times – we used to second him along the route – and Colin has four medals, including a gold for seventh place in 1995, while Kerry also earned a medal in 1992, so both races have always been a family affair. Recently I spoke to Helen Lucre, telling her I was interested in running them and asking if she knew of any clubs who would sponsor me. She put feelers out, spoke to Bob De La Motte, and next thing I was invited to come over by KPMG. They’re sponsoring me and I will be running for them, so I am very fortunate.”

Having grown up in KwaZulu-Natal, Colleen says she understands the incredible history of the Comrades, and that running it is a real achievement in most people’s eyes. “One year Colin and Kerry moved into a new house, so Darren and I visited for a house-warming party. Now that year Colin, Darren and I had all made the KZN Marathon Champs team, but when the new neighbours heard Kerry was training for Comrades, she was the instant hero of the day. Now I will finally be able to say I also did it!” she jokes.

World Class Talent
Colleen is one of the best female long distance athletes ever produced by South Africa. Over 10km, she has the second-fastest time at 31:16, just three seconds slower than Elana Meyer’s SA Record, and she has the sixth-fastest 15km time at 48:19 and tenth-fastest time over 21.1km at 68:38, with only Elana having ever gone faster. In the marathon, Colleen’s best is the 2:26:35 she ran to win the Berlin Marathon in 1996, which was on a record-legal unaided course, whereas Elana’s SA Record 2:25:15 was run on the aided Boston Marathon course. Colleen also won the Honolulu Marathon in 1995.

Unfortunately, the first 10 years of Colleen’s running career were limited to competing only within South Africa due to the country’s expulsion from international sport during the Apartheid years, but in 1992 she finally got her chance on the world stage at the Barcelona Olympics, finishing ninth in the women’s marathon. In 1996 she ran the 10,000m at the Atlanta Games and finished 13th in the final, followed by 31st in the marathon at the 2000 Sydney Games. She also placed fourth in the 1995 World Half Marathon Champs, was eighth in the 1997 World Champs 10,000m final, and 15th in the 1998 World Cross Country Champs.

Having moved to Boulder, Colorado in the USA in the early 90s so she could pursue a pro career in running, Colleen and Darren became US citizens in December 2000, and she brought home individual bronze and team silver medals for her adopted country at the 2002 World Cross Country Champs in Ireland, as well as a team bronze in Switzerland the following year. Then in 2004 she won the US Olympic Trials Marathon to qualify for the Athens Games, where she finished 39th in the marathon, and also won the US Cross Country Champs in 2004 and 2005. Back on the road, she finished fourth in the 2005 Chicago Marathon, eighth in the 2009 Boston Marathon, and won the 2010 Copenhagen Marathon.

While Colleen had an amazing career before she turned 40, including world record times over 10 miles and 20km, she posted some of her most impressive results after turning 40, setting 10 American masters records, including a 1:16:19 half marathon and 2:30:51 marathon when she was 46, and was voted the 2009 Master’s Athlete of the Year by USA Track & Field magazine. In 2012 she also turned to triathlon, winning an IRONMAN 70.3 age-group World Title in 2013 in Las Vegas, then adding a full IRONMAN age-group World Title in Hawaii last year, with a marathon run leg of 3:19:09, the 18th fastest among all female competitors on the day!

In Fine Form
On 13 February this year, Colleen ran in the 2016 US Olympic Marathon Trials race in Los Angeles, which she qualified for by winning the 2013 Indianapolis Marathon in 2:39:22. Even though now much older than most of her competitors and unlikely to qualify for the Rio Games, just being invited to the Trials is a huge honour in American running, so Colleen says she wanted to race it – and it would be great training ahead of Two Oceans and Comrades. Colleen duly clocked an impressive 2:49:57 in very hot conditions, and says “I’m in good shape, so now I hope to keep it going to Two Oceans, then step it up to Comrades. I don’t think it would be wise for me to race both, so Oceans will be a build-up for Comrades, but I am a competitive athlete, so when the gun fires, we’ll see what happens.”

Looking ahead, Colleen says her plan is just to keep fit and healthy, as her top level competitive days are behind her now, and she is focused on her career as a personal trainer. “It’s nice to compete, not just train, but I had originally decided that I didn’t want to race any more, because I was getting slower and it was not fun any more. However, running is part of my lifestyle, and Two Oceans and Comrades have given me a new goal and put the spark back into my running.”

“I’m also really looking forward to coming back to South Africa because it’s been two years since our last visit. My mum will be coming down to Cape Town, and we’ve plenty of family and friends to catch up with when we go to Durban. We might not live in South Africa anymore, but my daughters Tasmin and Tara tease me about some of the words I still use, like ‘petrol’ instead of ‘gas’ for the car, and I still say ‘ja’ now and again. In some ways, I will always be a South African.”