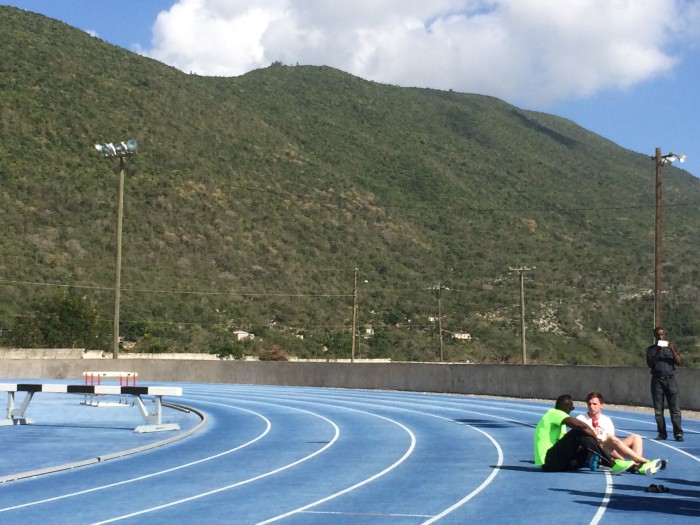 Our Modern Athlete correspondent Ciara Picco brings us the experience of her journey to the Puma Disc Launch in Jamaica! A day at the track and watching world-famous athlete Usain Bolt in action – all in a day’s work!

Amazing what a good night’s sleep can do for you.

Had a bit of spare time first up, so I was in no rush to get to breakfast. A nice rejuvenating shower and an AC electricity reminder (hair dryer is too powerful for the island) I was off to see what the buffet had to offer.

It seems earl grey is the tea of choice here YAY! Warms me to the core to be offered earl grey ahead of any other beverage.

The schedule for the day moved up quite a bit so after breakfast I stopped by the business centre for a bit of work and to check in with home and familiarize myself with the events ahead, oh, and to get the cricket score. That I could've skipped out on. Everything started sinking in, in a few hours I was going to see the world’s fastest man! Live! In the flesh!

A quick change into my Modern Athlete shirt and I was ready to go meet my transfer in the lobby. Gosh today was hot. Side note I might see snow on Sunday in New York.

We arrived at the University of the West Indies to various international broadcasters doing TV interviews with the man of the moment. He kindly obliged to a Mariokart derby and of course won, is there anything he can't do?

The print and online media were then taken to the basketball court for our time with the lightning Bolt. Colin Jackson former world champion, another of Puma's brand ambassadors introduced Usain and from there we had answered many questions on varying subjects.

In summation the man's preparation for the upcoming Grand Prix and Championship are on track, despite an early season injury, he eluded to participating in the 200m at the Grand Prix however left his Olympic events unconfirmed.

Usain's thoughts on his new togs are ones of a very pleased sprint champion, he is the first athlete to use both the Disc Ignite and the Disc Spike in training and the products support him fully to be where he is. It was comically mentioned that when he ran his 100m world record his lace came untied so he's quite happy not to worry about laces anymore.

We got a full feel of passion and pride for Jamaica while listening to Usain talk about his success thus far and the success of Jamaican sprinters in general. He loves his country and countrymen more than anything in the world, his main goal is to do right by them, and by doing right by them this allows him to do right by the international audiences.

On the development of talent, he spoke highly of the boys and girl’s national champs, the fierce rivalry of young men and women competing yearly for their school to win a national title is what breeds the winning instinct of Jamaican athletes. From this young high school age, the athletes learn to compete with a stadium full of people egging them on, and every Jamaican talent has been spotted at these champs from an early age and so the level of hunger to achieve in the teens is high.

The big 'R' came up too and Usain was quick to wave it away ensuring us that he will not retire at this year's Rio Olympic Games. He is keen to take it one year at a time and also still has a goal to run the 400m in under 45sec, which his coaching and management believe is an achievable goal. On age, the only difference from when he was 21 to now that he is almost 30 is that it takes a little longer for injuries to heal, but the champ is just as excited and hungry to compete as ever. When the day comes that he leaves competing he wishes only to be remembered as an inspiration to young people, the cool guy who had fun living his dream through hard work and determination.

Well, I will certainly remember him like that always. A very humble, fun loving hard worker and ambassador for track and field.