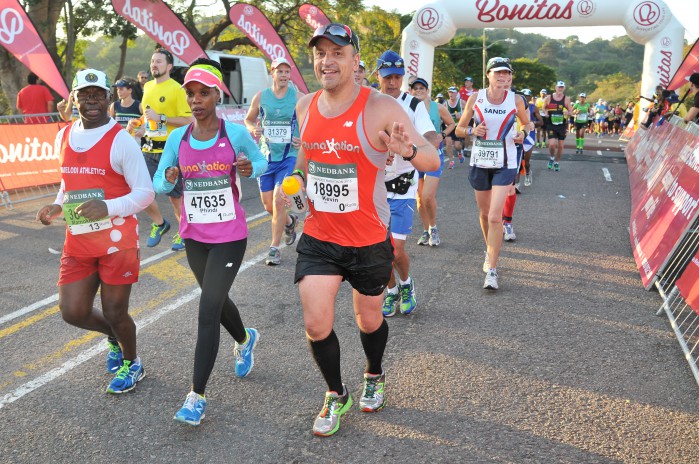 When radio personality Phindi Gule, a self-confessed non-runner, decided to run her first Comrades in 2012, she went on air and told 1.2 million listeners about her goal. No pressure, then! But she did it, and that led to a whole host of running adventures and initiatives, including the Comrades Women’s Seminars. – BY SEAN FALCONER

She will be the first to admit that she got into running by accident, through her husband, Englishman Kevin Burley, and that her first training run was a real shock to her system, but Phindi Gule has never looked back. “In 2011, I figured that since I was already getting up with Kevin to go to all these running events, why not do them, so we started running together. But the first time I went out training, I couldn’t even run one lamppost to the next! My first race was the Youth Run just before Comrades, and it was pure torture, but I finished, and that feeling was priceless, so I made it my business to stick to it. Later Kevin said, ‘I think you can do Comrades.’ I said, ‘Are you mad?’ But running sucks you in…”

“Now I always need to find a really good reason to do something, and stick to it, so what pushed me to continue running and go for the Comrades was that in KZN there wasn’t an on air radio personality who ran Comrades. I had never been a runner, but I had eight months to train for it, so I told 1.2 million listeners my goal, and next thing I knew I was back in Soweto, my hometown, for my qualifier.”

Phindi duly lined up alongside Kevin for her first Comrades in 2012, but he was not feeling well due to flu. “Eventually he told me to go on and leave him, but at first I didn’t want to go – I even said I don’t know the directions! Later I was passed by the 12-hour bus, but I thought of all those people supporting me and that motivated me not to give up. When I ran into the finish, it was already dark and cold, but I saw supporters with boards with my name, still waiting for me, and when I finished in 11:59:03, I celebrated like I was the winner!”

Helping Others
Phindi’s experience in the build-up to that first Comrades, which included looking for women-specific advice, sparked an idea, so she contacted Gary Boshoff at the Comrades Marathon Association to suggest a series of Comrades Women’s Seminars. “I was seeing a lot of women out running, but far less in the Comrades, and I thought it was because the recommended training was too hard – six days a week for somebody with a job, kids and husband, and more, was perhaps just too daunting. So I proposed the idea of seminars covering all the bases, where women could get all the info they needed to run Comrades. The CMA loved the idea, and we started with three in 2013, in Johannesburg, Cape Town and Durban, added Pretoria in 2014, and we’ve added PE this year. I am still amazed that we even get women at the seminars with Comrades Green Numbers, who come for new info.”

Having MC’d the Women’s Seminars, Phindi lined up for the 2013, 2014 and 2015 Comrades Marathons armed with plenty of great advice herself, but things did not go to plan. “I had run and finished my first Comrades with Kevin, but in the second one I ran alone. Physically I was fine, but mentally I was not ready, and just before Fields Hill I was tempted to walk, until a guy just behind me said, ‘No, you can’t walk, I’m using you as my pacer.’ So we started running together.”

“Around Hillcrest he was feeling sick, so we stopped for help, then got going again, but just before halfway he was really out of it – I could see the whites of his eyes, so I decided to stay with him until an ambulance came. Then I had to sprint for halfway to avoid the cut-off, and just missed it by 14 seconds – but I am OK with that, because I can live with my conscience.”

Things went much better in 2014, but once again Phindi just didn’t have enough in the legs. “I missed the final gun by seven seconds! That is the worst, when you reach the finish, but no medal – but it was still a wonderful experience.” Then came the 2015 race, which saw Phindi running as one of four athletes being followed by a documentary film crew, and this proved the undoing of her race. “I had to be up at 2am for the first recording, and then had the camera crew following me in the race. I thought it would be doable, and everything was fine until just before halfway, when I felt a sharp pain around my heart. I told Kevin, but said I was still OK to run.”

“However, around 50km in the pain was getting severe. He said I must stop, I said another 5km, but I could hear Comrades Coach Lindsey Parry’s voice in my head, ‘If you have pain that is uncomfortable or unfamiliar, you have to stop, and come back and try again another year.’” That saw Phindi and Kevin catch a bailer bus at 56km, and later the doctors told her it was anxiety. “Of the four of us being followed by cameras, only one finished, and I think it was too much mental pressure to deal with. Luckily I was fine physically after the race, but that emotion and pressure was visible in the video, and I still get people telling me that it gave them goosebumps. So I’ll be back to try again this year, but no camera crew this time!”

The Right Voice
Born and bred in Joburg, Phindi studied chemical engineering at Cape Tech, specialising in IT, and initially worked for SAA as a programmer. However, after listening to a news reader on Radio Metro, she decided she could do better. “I have a passion for public speaking, so I called the station asking for a weekend job to read the news.” Within a week she was on air. After initially working part-time in radio, Phindi went on to work full-time at various radio stations, relocated back to Johannesburg, studied journalism part-time, then relocated to Durban, eventually ending up as station manager at Vuma 103FM. “I came into the job with 15 years of experience in radio, but well aware that there are few female station managers in this country. It was a huge challenge, but they believed I could do it, and that made me feel confident. The other thing that made me feel like I could do anything, was having run the Comrades.”

Today Phindi is still involved in radio part-time, but her current day job is alongside Kevin in the Phindi Gule Group, doing marketing and communications work, plus leadership development and wellness presentations. “Running has actually become a job – who would have thought! – and we incorporate running in everything, because health is one of the key things holding companies back.” She has also developed her Master Class workshops for beginner female runners. “There are lots more women starting to exercise and changing their lifestyles, but they need to start at the right point, with the right info.”

Besides her seminars and workshops, Phindi is quite the running motivator. Recently, using radio and social media, she got people all around the world to join her in the 10×10 Challenge, running 10 kays each day for 10 days, then 25km on Christmas Day, followed by 31km on 31 December. Her next project is the 30-day, 900km KZN Challenge in April, where she and Kevin will run the length of the KZN coastline to raise funds for the Live Foundation, which cares for orphans in Verulam, near Durban.

Another project on the cards is the launch of Phindi Gule World, an innovative TV app that will allow people to watch health, fitness, wellbeing and motivational content on their phones. And then it will be the 2016 Comrades, if her legs have recovered in time from the KZN Challenge. “I would love to run, but I’ll have to see how I feel. Comrades is just so addictive!”