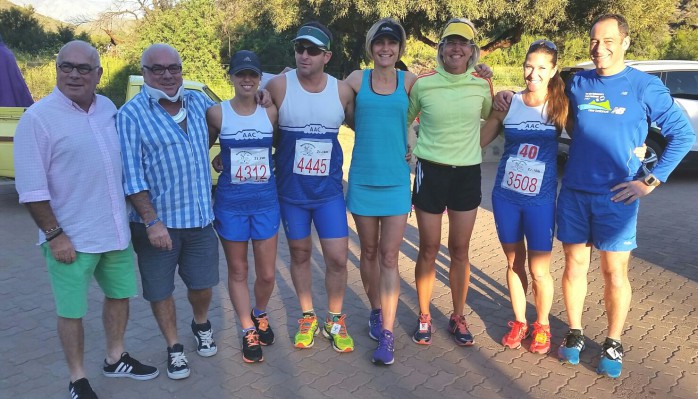 On 31 December 2014, I had a little drinks session on my balcony to welcome the new year in. As part of the fun, I put up a whiteboard for everyone to write down their goals for 2015, and most of the 30-odd guests wrote something down. Mine was to do 12 marathons and 21 half marathons in the coming calendar year, a commitment of about 33 weekends of the year. – BY JONATHAN KAPLAN, FORMER RUGBY TEST REFEREE

The year got off to a slow start, as I was still recovering from a nerve issue developed towards the end of 2014, and I could only really start running again in the middle of January. The Peninsula Marathon was my first, which I had to do – it starts practically outside my house! Besides a little hurricane in Lakeside, it was a fine plod, although running a familiar route (my fifth) didn't make the last bit any easier – the sun really starts to beat down as you approach the last little mound leading to the finish – but there are no time pressures for me these days.

The Cango Caves 42 has always been one of my favourites, and my AAC club had quite a large contingent going through, so it made it a lot more fun! Essentially a downhill marathon with a sauna waiting at about the 32km marker, it was nevertheless the same fun as before. Thanks to my old mate Jonny Aitken of Wanderers for keeping me company for about 10 kays and reminding me that I'm a little heavier than when he used to chase me round the rugby fields in Joburg.

My seventh Two Oceans was run in perfect weather, with a light drizzle accompanying us for the first 21 kays. Then we climbed this unfamiliar 7km hill that is Ou Kaapse Weg, from the back side, and it became a little tougher. It did, however, give me time to absorb the incredible damage that the recent fires had done to our environment. The highlight of the race was encouraging a much younger and fitter athlete, who was having a bad run, to plug on to the finish. For about 8km I cajoled and confused him into not just going home – he lived “around the corner.” My medal has more colour than those finishing ahead of me… it appears to have been reserved for those that are slightly older, more mature and a little heavier.

Overseas Expeditions
I had planned a trip to France to run the Paris Marathon and I wasn't disappointed. I joined up with a group from Regents in KZN, and the greatest photographer I know, Brett Florens (20 Comrades as well). A little night out with an extended group and the race was upon us, setting off down the Champs Élysées towards the Louvre. The initial group of friends eventually splintered, but I was happy to share the maiden journey of Sam Edwards (along with new running friends Paul, Melissa, Vanithay, Ed and Paige). My race itself was one of my all time fav’s, with many sights along the way, massive support and lots of amazing and very noisy bands! What a privilege to have run this race. We went for a few drinks afterwards and that quiet little afternoon decision turned into a huge night for some. We ended up at the Buddha Bar. That's all.

Next I hopped over to England for some chill time with friends, and the next Saturday, six days after Paris, I was in a tiny little village in East Anglia called Bungay. After a few of the local beers and a pizza to prep for the race (Prof. Noakes would not have been impressed), the next day I ran the Black Dog 42 along with about 350 others. The weather was unreal, staying around 10 degrees, and the course was mostly flat. We did two loops of Bungay to Beccles and back, on country roads through some really quaint places, and as I was finishing the first lap, I had to run past the half marathon start and got a round of applause from the 1000 odd runners. A couple of minutes later, I got swallowed up as they started their race.

I returned to SA and made the trip to George to run my fourth marathon in 21 days. The Outeniqua 42 is a beaut of a race run from George to Wilderness, with breathtaking scenery, and I was running slow enough to enjoy most of it. The last 10km are mostly downhill, which gave me a chance to find that delusion once again that I am actually Superman. Or is it Kaplan America?

Tough Day in the Office
After a few weeks’ break, I ran my seventh Comrades. I thought the prep went ok, but I suppose I just had one of those days. The huge doses of echinacea that I was taking before the race to offset a little cold could possibly have hidden illness, but I really had a poor run. The special event that this is, is made by the camaraderie of the runners and the support of the public, and there was plenty of it. I had some retching and vomiting for about 20km from about the 28km mark, and from then on I was a mess. Too proud to stop, I just continued on at a really pedestrian pace (pun intended) and finished 10 minutes before the cut-off. Thanks to Candyce Hall for parting with her flavoured milk at the finish as I attempted to put a smile back on my face, and Craig, our club captain, was incredibly helpful after the run as my body went into a cramp frenzy. I must have resembled a spastic break-dancer as I lay on the ground recovering!

A winter fattening up of sorts followed, but the lure of Knysna proved too enticing, and before I really had time to recover, I found myself lining up at the start of the Knysna Forest 42. I don't remember the first 15km, because I hadn't yet woken up… which was a good thing… and I shuffled through this very tough expedition to finally arrive at the festive finish with another one in the bag.

I love a little weekend getaway, and Riebeeck-Kasteel is one of my fav destinations, with the Royal Hotel one of my fav hotels. A near perfect run weekend followed with a great crew of five of us running one of the best social runs known to mankind – Jana, Craig, Caroline and Terry stuck with me for most of the way and waited when I wilted, so that we could all finish together (in a heap). The gin and tonics at the Royal are beyond tasty, and we drank them dry, joined by Kenny and Lisa Jackson. We had the time we were all after.

The Cape Town Marathon is one you simply have to do if you live here. The course was improved from previous editions as the race attempts to stamp itself in the World Class category, and I ran a bit with Marius Hurter (Bok prop) and Ryan Williams (UCT & False Bay), and finished with a wet sail storming home strong on the inside rail!

‘Heatwave’ in England
Whilst doing some ‘work’ at the Rugby World Cup in England, I snuck in a marathon in Chester. What a fantastic event! Run in perfect conditions, it didn't stop some of the locals complaining about the boiling temperature – it never rose above 16 the whole day – or the hillock at the end, which was nothing more than an oversized footbridge! I wasn't the only AAC runner there, and neither was I the only South African, as I was met at the start by my running friend Adnaan from Central Athletics. At the start they introduced some bloke who had done nearly 400 marathons – made me think my attempt to get to 100 was child's play! The race itself was bloody awesome, and if I'm ever in that neck of the woods again, I will definitely be going for an action replay!

My 12th was the Winelands Marathon in Stellenbosch. It was my fourth take on this race, but my first in 25 years… Long time between drinks! Anyhoo, I arrived in time for the start, only just, but fell behind looking for some of the others whose numbers we were holding. I had told Sabine I was going to run her first with her, and whilst there were some gaps missing from the picture, I did start and finish with her. For me, the finish line was a big relief as the commitment finally came to an end. I did enjoy every step of the way… almost.

Just one more…
Not having had enough, I decided on the spur of the moment to drive through to Heidelberg for the Vlaktes 42. I stayed at Swellendam the night before and woke up at 4am to get to the start on time. After an initial bit of climbing to get through to the 12km marker, we were treated to a gradual downhill drag to Witsand. The weather was very good, the finish on the beach was lekker, and the baker’s dozen was in the bag.

One last plod awaited, and such a friendly mob in PE easily distracts one from the inevitable windy conditions, but the route itself was flat and pretty forgiving. It was my 50th standard marathon and 70th overall, and with that I finally caught up with the number of test matches that I had done as a referee. I have 30 to go to reach the magical 100, and it all starts again in 2016 with the Miami Marathon on the way to my nephew’s Barmitzvah in Toronto.

These marathons are just small journeys, little steps joined together to form the greater journey. I know there are others who have done much more for much longer, and I take my hat off to them all, but it doesn't make me any less proud of my little steps.