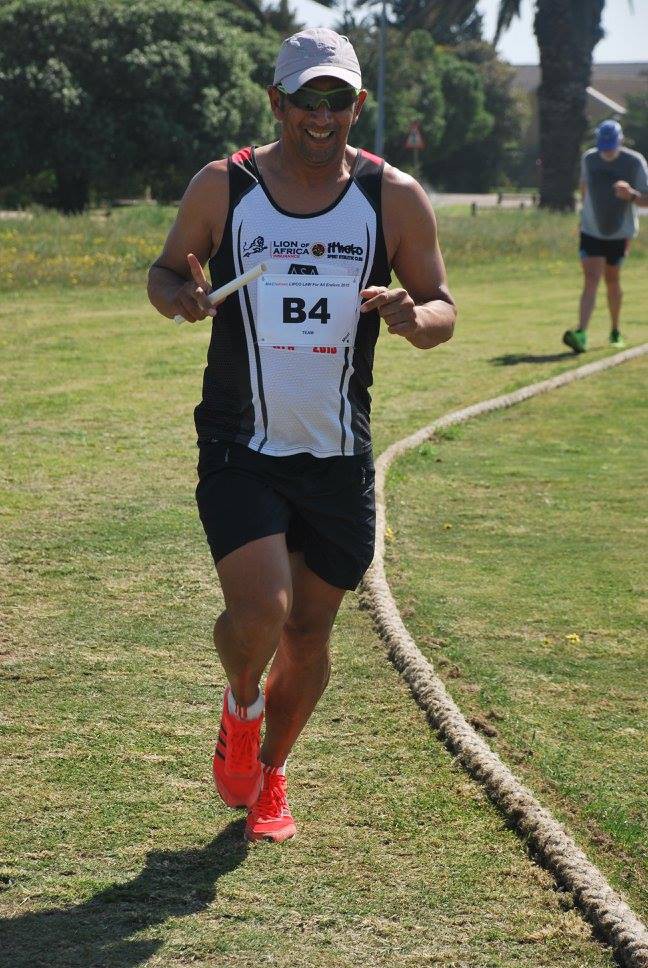 He’s one of the most irrepressible spirits of the Western Cape running and multisport communities, but just a few years ago Ashraf Orrie was going through hard times, and he says it was running that got him through it. – BY SEAN FALCONER

When his construction business took a downturn in 2010, Ashraf Orrie took a lot of strain, eventually ending up with depression, but things started to change for the better when he decided to take up running in order try take his mind off things. “That was when I realised what I had been missing all my life. Not only did I get fitter, lose weight and feel great, but you make so many contacts through running, and I picked up many jobs through the sport. Also, when I was having financial troubles I was sleeping 10 to 11 hours at a time, but now I feel fully recharged with just five or six hours. I was sleeping my life away!”

By 2011 Ashraf had been joined on the road by his whole family – wife Roldah, daughter Nabeelah and sons Zunaid and Riaz – and they all took to the sport so well that the whole family went home with awards at the 2014 Lion of Africa Itheko Athletic Club Awards. “Our kids are very dedicated to their studies, top academic achievers, but come race day, all the talk in the house is about running. We really went through a total lifestyle change: No more burgers, curries and biryani, now it is salads or tuna for supper. We train together, and shop together for sporting goods, and there are running magazines on all our dressing tables.”

With three Comrades to his name, including a best of 9:44:59 last year, Ashraf (47) says he felt he had come full circle in running, having done all the races in Cape Town and a few others around the country, as well as joining clubmates on two overseas tours to run marathons in Athens, Barcelona, Rome and Istanbul. “I decided my next challenge would be triathlon, so I did the ITU Cape Town Tri and the XTERRA at Grabouw, but just as a social athlete. My first proper triathlon race was at Slanghoek near Worcester in September, and I finished third veteran. I came out the water mid-field and stayed there in the cycling, but then made up all my time on the run. Now in January I’m taking on my first IRONMAN 70.3, and then it will be the full IRONMAN a few months later.”

Running Cameraman
If you spot Ashraf at a race, chances are he will be pointing a camera at you, and he has been known to take between 300 and 400 photos during a half marathon! “I run with my camera if I am doing an easy run, and everything goes up on Facebook, where people can tag themselves. I also post my diet and training programmes, and I have a lot of contact with youngsters who say I inspire them. They even joke that I am now a bit of a target to chase,” he laughs.

“I regard myself as a very unselfish person – I’m happy to share what I have learnt, and my door is open to all. Some of the young guys know where I live and that they can get a plate of food there, and I also give them lifts to races, or help them with supplements, or accommodation. I don’t ask for a cent; my satisfaction comes from seeing their faces when they realise somebody is prepared to help them. I simply love running. I only started running late in life, so now I’m grabbing all the opportunities, making the most of it, just enjoying myself, but also trying to help others along the way.”