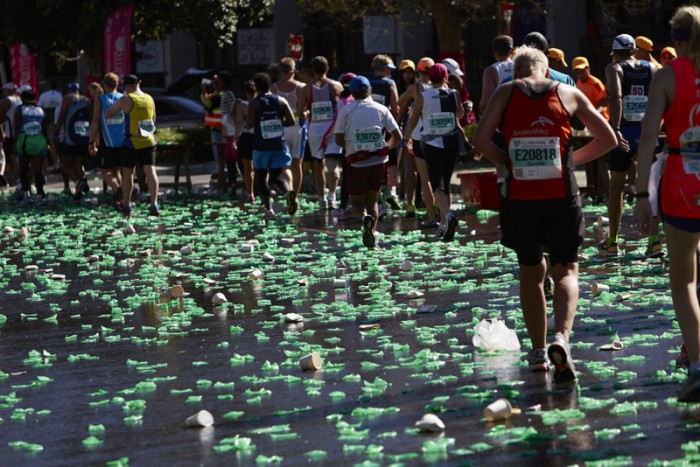 Western Province Athletics (WPA) has become the first athletic province to officially endorse the Modern Athlete #runclean campaign, which aims to clean up the litter problem in road running by calling on all runners to stop dropping used water sachets and other litter on the roads.

This campaign was launched in August 2015 by Modern Athlete, South Africa’s largest running publication, as the team behind the magazine has grown ever more concerned about the amount of litter being left on the roads by the running community during races. While much of this litter is cleared up by hard-working clean-up teams, some still gets left on or alongside the roads and thus ends up in the environment, especially if the wind is blowing during a race.

As the first province to pledge support for the campaign, WPA has called on all race organisers in the province, including both clubs and events companies, to include the #RunClean logo on their race flyers, and the provincial officials will work with race organisers to give extra attention to their litter management plans. The province will also be use its social media platforms to promote the campaign.

WPA has also invited race organisers to liaise directly with Modern Athlete to engage more formally to give their events coverage in the magazine and on the magazine’s digital platforms if the events support the campaign in an official capacity. Thus events will receive extra, positive publicity, which in turn could promote entries, at the same time that the environment benefits from the spreading of the anti-litter message.

“Here at Modern Athlete we have made it our mission to promote a cleaner sport and try to eradicate the litter problem in our races, by continually reminding runners to think before they throw,” says Modern Athlete Editor Sean Falconer. “We believe that every piece of plastic not dumped on the road is a step in the right direction, which will not only lead to less litter on the roads, but in the long run to less waste being produced by our sport, much of which potentially ends up in the sensitive environment or the oceans, so we ask all runners, clubs, events and athletic provinces to join our campaign and pledge to #runclean!”

A number of races have already officially signed up to the campaign, including the Vital Winelands and Red Hill Marathons in the Cape, and the Dis-Chem Half Marathon in Gauteng.

Think before you throw – #runclean

What individual athletes can do to #runclean:

• Many runners go for long training runs without carrying any water, but suddenly in a race they cannot get through three kays without water. You don’t need to drink so much water when running, especially in shorter distances – and you really don’t need to take three sachets at each water table! So often runners take more than one sachet and toss one or more unused, or only use half the water in the sachets before throwing them away. That not only wastes precious water, but also means more waste lying in the road.

• Better idea: Carry your own water in a hydration backpack or water bottle belt, so that you don’t need to use the sachets. Some runners say it weighs them down, and thus slows them down, but trail runners seem able to run quite comfortably and quickly while carrying water, so surely road runners can also do so.

• When you do use the sachets, don’t drop them (or other refuse) in the road – always look for a bin. Come on, moving a few metres towards a bin really won’t cost you that much time.

• In fact, you don’t even need to throw the sachets away… You could carry your rubbish till you can throw it away, even if that is at the finish. Just stick the empty plastic sachets in a pocket, or in the waistband of your shorts, because carrying a few pieces of ultra lightweight plastic simply will not weigh you down that much!

• Handy hint: If your running kit does not have one, make your own pocket by sowing on your front provincial licence number with the upper edge left loose, to form a pocket in which you can carry rubbish to the next bin or the finish. Again, this will not weigh you down and cost you time.

• If you simply must drop a sachet in the road, try to at least do so within easy distance of the water tables, in demarcated litter areas, not two and a half kays up the road. That way the clean-up crew can quickly, easily and safely clean up. Remember, many of these volunteers are not runners, and they are there to support you and help you get to the finish line, not spend hours of backbreaking work walking for miles along busy roads to clean up after you! Think they will be back next year to hand you water sachets after that? Think again…

• Never toss a sachet where it cannot be seen or retrieved by the clean-up crew. Especially not into the bushes next to the road. Or into a storm water drain. Or under parked cars.

• On windy days, make doubly sure your litter is well disposed of in bins or rubbish bags so that it doesn’t get blown all over the place, thus making it even less likely that it all will be picked up by the clean-up crew.

• If you see fellow runners littering, try to diplomatically suggest a cleaner attitude going forwards, but avoid getting into an argument or confrontation.

• Even better, why don’t you volunteer to do water table duty at a local race and then help clean up the mess afterwards. That should make you think twice about tossing your sachet next time, because we doubt you will enjoy picking up a few thousand sachets. Nobody would enjoy that!

Lastly, make a point of being a cleaner runner by promoting a no littering rule, not only in your own behaviour, but also in your social media comments and interaction with fellow runners, and include #runclean in your Tweets and Facebook posts.

Think before you throw – #runclean